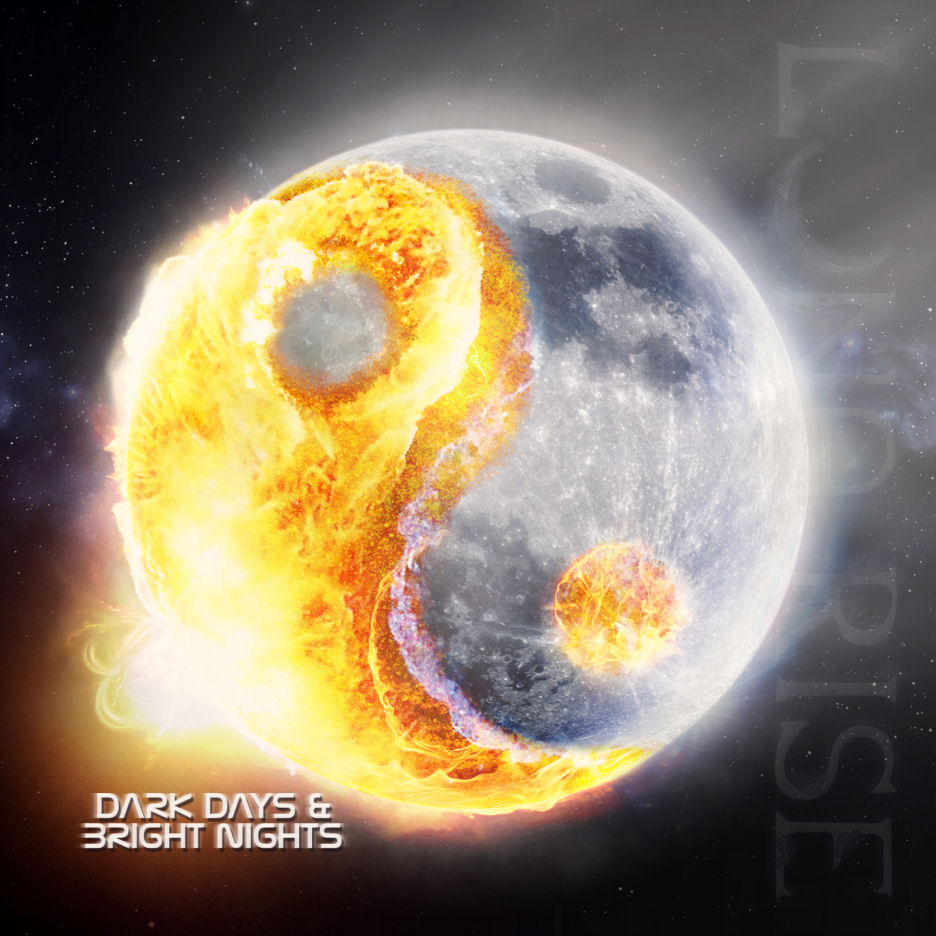 Well…that makes it a little easier now doesn’t it?

I was trying to figure out if I’d be correct in saying that the intense-rock music of Luna Rise still has a majorly melodic backbone that they base their music around – and low & behold, there on their social-media pages they’ve self-described the music as Heart-Rock/Melodic-Rock already. So…I suppose that leaves me to completely agree with them; after a thorough listening through the new album from Luna Rise – Dark Days & Bright Nights – it’s clear that while they quite often choose to rock the fuck out, melody continues to reign supreme on each of these new songs.

Always exciting when an album comes to us here in Canada from so far away – Luna Rise is based out of Enns, Upper Austria – and really I had no clue what to expect when pushing play on music coming from that region of the globe. They’re a five-piece…so you get everything from dynamic vocals, keys, guitars, bass, drums and more as they start up Dark Days & Bright Nights with “Demons Inside.” Big build in this opening tune; “Demons Inside” starts out close to something you might hear from Trapt, Adema or maybe even Alien Ant Farm, but in my opinion becomes a much more valid composition by the end of the song than any made by those comparisons. It actually becomes a pretty unique combination of up-tempo modern-day rock with a tinge of old-school running through it…you get some classic-sounds through the harmonies and guitar-solos…nothing too-dated sounding…but somehow close to the edge.

“RZRRKT” is a fantastic example of composition and how to build a song. There’s a few parts I liked, and a few not as much – but what I loved most about this particular song, is that from verse, to bridge, to chorus…this song gets bigger and BIGGER as it plays. I’ve heard a lot of choruses try to be anti-choruses lately…where they scale the sound back right where it traditionally gets bigger…and in my opinion those methods are not working – what we need are movements and dynamics in rock that build the way that “RZRRKT” does with each part building upon the energy of before and rising above it even more. Standout performance from Chris Divine on the lead vocals…right around the three-minute-twenty mark, this guy lights up the mic with an explosive-ending to the song that is massively memorable.

By the time I had gotten through “Valentine” I thought any likeness to the original comparisons I made in the opening moments were irrelevant by this point. With the melodic tones that run through their rock-music, the song-writing, solos, harmonies and structures in their music, I actually found Luna Rise to have much more in common with bands like King’s X, Toto or even the Marvellous 3. All three of those comparisons basically stem from different decades…and I think that kind of historical influence is something you can hear in the music of Luna Rise. While songs like “Valentine” and “Dancing With Tears In My Eyes” inarguably lighten-up in sound and atmosphere, they still maintain their rock edge amongst big hooks that could just as easily find a home/success in pop-music as they do within their own genre.

“For A Reason” was a song that confirmed for me what an integral part of Luna Rise that Clarence Hell is on his guitar and L.X. on the keyboards. These two have been completely essential all throughout these opening tunes and largely supplying the melodies in the music that singer Divine weaves his magic over. “For A Reason” is a real highlight on this album for the tightness of the overall song and passionate performance. Hell’s guitar-work is beyond-perfect in this song and the tones he’s getting from his guitar as the very blood pumping in this music-chubby I’m sporting right now…awesome, awesome, awesome sounds – Hell really brings the life to “For A Reason.”

“The Secret In You” is a pretty powerful song. Led by the opening melody of L.X. on the keys, Divine starts this one out with a rising energy that stays in line with the mood without pushing too far…to start. As it closes in on the end of the first minute, I was feeling that cohesiveness slightly drift apart between the vocals & music, but quite fortunately, they mix it up and begin to take this song to different places through the chorus where it all instantly felt tight once again. As the song bursts open past the halfway-mark, this song heads straight-up in energy and the vocals shine bright in the chorus; “The Secret In You” ends up a long way away from where it started…a real journey for just over four-minutes of music.

The resulting combination in “The Secret In You” almost made it a little tougher for me to go back to “Silent Screams,” which is a good song in its own right, but almost sounded a little easy for the band in comparison to the surrounding tracks. It has a great energy to it that never lets up, it’s uplifting in sound…but I’m not sure I hear as much of a genuine-feel or connection to “Silent Screams” in the way that I do on a song like “Worshippin’ Shadows.” To me…a song like “Worshippin’ Shadows” shows Luna Rise at their most-engaged on Dark Days & Bright Nights…everyone is putting in a top-ten performance here on this track. Definitely a stand-out for drummer Loup-Garou, but also Luna Rise as a whole – they’ve nailed themselves a wicked tune here as they head into the final third of the album.

Clu Vasquez opens up a lot more towards the middle and end of this album on the bass. Really leading the way strongly on “Until The Stars Have Come,” Clu and his rhythmic cohort Loup-Garou have been a solidified unit throughout this record, but it’s great to hear each of them breaking through the mix a little more to standout & shine at moments like they do in this last half of Dark Days & Bright Nights. Using a fantastic female singer to fill out the lead vocals and backing harmonies on “Until The Stars Have Come” was a great idea…combined with the melodies from L.X., this particular track is one of the larger departures from the typical nature of Luna Rise and really brings them out into the spotlight 10% more. Together, these two singers are absolutely fantastic…this is a combination of sound that should certainly be highly considered for future recordings.

Returning to their own alternative/hard-rock/pop melodies and brand of energy, Luna Rise storms through “In Your Arms.” Including an excellent mid-song breakdown that has some wicked fun with the lefts & rights of your stereo & vocal samples – the song nearly takes a half minute off towards the end before exploding one last time in a full-blown chorus ride to the final seconds. Taking that energy into the shortest song on the album, “The Storm” is another great example of their ability to incorporate melody into their rock-music. Great contrast between the verse & chorus on this second to last track – Divine shines bright with a versatile performance that switches brilliantly in between the two main parts of “The Storm.” Another huge solo & guitar-clinic put on by Clarence Hell…the guy cannot be contained…he’s a beast with a VERY BIG AXE on this song; “The Storm” brews, builds, swirls and eventually envelops us all in its enormity.

Ending with “The Anthem Of The Night,” – Luna Rise creates multiple memorable final moments with some of their biggest ideas fully-realized on this last cut. Divine has some standout parts…others there’s a little more of a struggle than some of what’s previously played…but overall, the music and the ideas in this song are completely incredible. I love what Divine does around the 3:40 mark…I think he should potentially experiment with that falsetto combination in the future as well…that’s another winning combination for him. The music on this one is all-over the map, perfectly played and switching into parts flawlessly from the ones playing just moments before. Arguably ending with a real nod towards the future sounds to come from Luna Rise…I think “The Anthem Of The Night” is the kind of ending you hope for in an album with some of their most challenging ideas coming to vibrant life in audibly-captivating ways you can’t ignore.

Find out more from the official Luna Rise homepage at:  http://www.lunarisemusic.com/