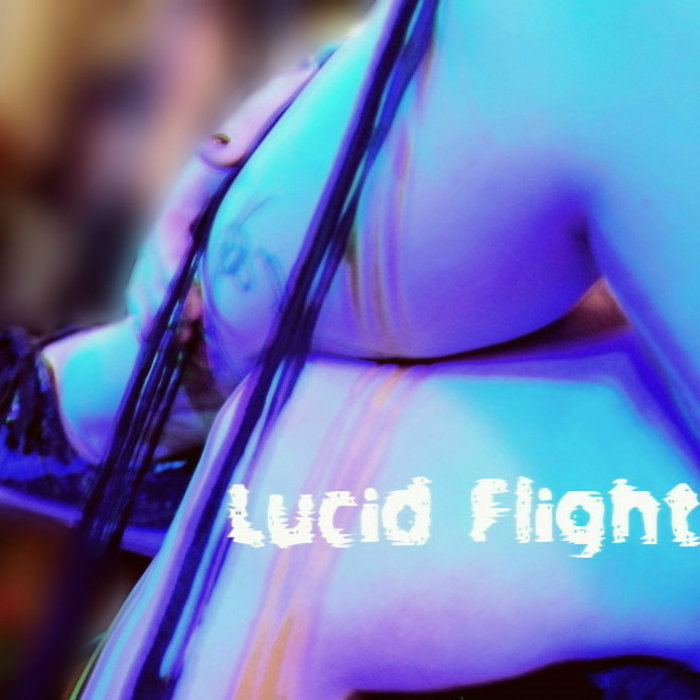 I honestly didn’t realize that we still had a few reviews coming through arranged during our moving process to Ottawa – I thought I had gotten those all finished up when a tiny little EP with two songs and a big sound reminded me that I hadn’t yet told you about Lucid Flight, a four-piece band based out of Burnsville, Minnesota.  So…well…umm…yeah!  I’m here to do that now!  Apologies on taking an unearthly long time to review this new EP, In Your Head…let’s get to it!

My first impressions are always strange ones, but my first instinct is pretty damn reliable; whenever I see a button that says ‘push-play’ or has that little triangle icon, you can safely bet that’s probably the very first thing I did before I begin to read a single word or find out more about any given band or artist.  So…when the entire EP was finished in like, less than five-minutes…I was confused for a moment…then I went back to their Bandcamp page, where of course, you can designate a particular song for people to hear when they load up your page.  The advantage to song number one being the song that starts up, is that it’ll continue on throughout the playlist of course – but once it hits the end of a Bandcamp playlist, not many repeat the set, which is why my first listening to the In Your Head EP was so freakin’ short!  But c’mon now…two songs on an EP and you select the second track as the one to hear first?  You wouldn’t have seen that coming either, admit it!  Besides…c’mon Lucid Flight – who does that?

I would be next to nothing at all without my ability to be a smartass…of course I’m just poking fun at them and OF COURSE I went back to start it up from the first track, “Miles Of D” to take in the experience for real…from the beginning.

Right away, I can hear that there’s something here…though I’m not completely sure I know WHAT it is yet – or if they even do.  In Lucid Flight I hear a sound that is more than complete & ready to go…but still sounds like it’s more than likely at the beginning end of their career overall, still refining and defining their sound.  “Miles Of D” has plenty of thick, low-end crunch to it…especially those guitars, the solos are outstanding with soaring tones that are the true-essence of Rock.  The bass has a simple but effective line, the drums are solid and have clever fills and timing that put some stunning dynamics into this first tune.  All this being said…”Miles Of D” nearly has more in common with a prog-rock song than it might with the Hard-Rock edge I think they’re after; the song meanders a little in the writing and is a little hard to follow in a sense…all of the parts sound good and well-played…but the way it builds and breaks is missing that special-something that takes it right up to the next level.  Like…for instance…right after Reba lets out that first jaw-dropping scream, the dynamics of the music change as you’d expect they would…but the song doesn’t quite expand or get any bigger thereafter.  I honestly wish I could be of more help to them in backing this up…it’s a hard thing to explain I suppose; best way I can think to put it, is listen to the way that the guitar solo brings some brightness and life back into the mix of the music – by comparison to the chorus, this is loaded-up…and I think that chorus is still missing that ingredient that makes the uniqueness of this part stand out as it should…just wish I could help them by figuring out what that missing piece would be…

But there you have it…that’s my thoughts on their opening tune “Miles Of D.”  So far I dig the band and I certainly dig Reba’s voice.  In terms of potential here for Lucid Flight…their writing has great ideas and their band is tight enough…but it’s going to be up to Reba largely to take them to that next-level and captivate the people.  And I’ll say this regarding that…I don’t know for a certain fact that I’m hearing her at what I’d consider her at her best here on the EP, but I think she’s doing a fantastic job.  What I do hear…is perhaps more potential in her voice than I’ve heard come from the indie-scene in a long time now – I honestly believe that within a few short recordings from now, we’ll be dealing with a voice that is ten-times as powerful as it already is…and she’s going to become a force to truly be reckoned with.

Other than that…maybe a few tiny touches to the clarity of their sound when they’re all thumping away at full-blast and I think they’ve got exactly what they need.  In regards to Reba – there’s tons of audible-proof in these songs on the In Your Head EP that take a nod or a head-bang in the direction of that amazing potential fully-realized.  When she screams…believe me…you feel it and you fear it – she’s deadly!  The first one you get in “Miles Of D” might still be my favorite though…loved the sound of that initial shock.

Theoretically and assuming it wasn’t by accident to begin with – I can understand why they’ve chosen “In Your Head” to be the first song you’d hear when you track them down at their Bandcamp page.  Between the two songs, I think there would be some validity to saying that “In Your Head” might be a stronger song for them overall…and perhaps by quite a stretch.  For starters, the bass has a much more pronounced and challenging rhythm – flawlessly played by Anthony Masog I might add – and that really helps define this song a little more…it allows Ben Porter to really expand and spread his wings while the rhythm-section holds the fort down.  Nick Juve has proven to be ever-reliable on the throne with solid hits, great-timing and enough in each song without over-complicating the competing ideas from the other instruments.  It all comes together beautifully on what is a much more gentle song overall perhaps, but its strengths, at least to me, are much much mightier.  I think the tone of those guitars from Ben are just immaculate and the performance as well…the bass from Anthony never stops groovin’ and Reba is more than fantastic as she reaches up into the beyond towards the final moments of “In Your Head.”

Look…the last thing I’d say about the opening song “Miles Of D” is that it’s inaccessible…but if you want a great definition of what accessible is and sounds-like…I’d honestly say you couldn’t go wrong with “In Your Head.”  Lucid Flight often reminds me of one of the bands we met towards the end of our time in Vancouver…another band with an excellent, strong & confident female-lead – the Modern Day Poets.  There are a lot of similarities I can hear in the music and the approach…I like the punch of the music in both of these bands and how well you can hear it would be suited for the stage.

But yeah…I’m certainly not complaining, don’t get me wrong – I’ve enjoyed this EP from Lucid Flight and I’m seriously impressed with the amount of future-potential I think they’ve got as well.  Mark my words…Reba is going to become that unmatchable force any moment now…she’s nearly there already.

And when she gets there…there’s a solid chance this band could do some truly incredible things in Alternative Rock – and the thought of this pleases me greatly.  Lucid Flight’s In Your Head EP is a great start and thoroughly entertaining introduction to the band through a couple of versatile new tunes that show different sides of what they do…and however many sides there are, or will be…I’m interested.