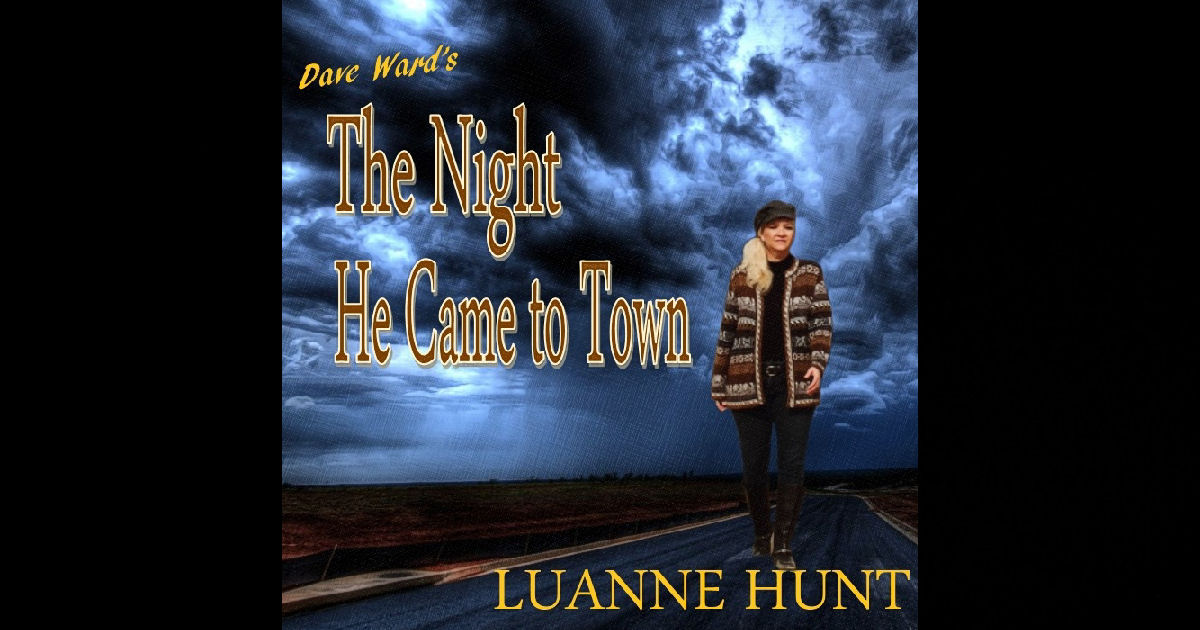 Luanne Hunt – “The Night He Came To Town” – Single Review

Awesome to hear some artists we know stepping out of their normal lanes and into new ones this year.  Consider the golden-vocal of Luanne Hunt a part of that esteemed crowd of artists challenging themselves in new directions in 2019 – we know her from her Country music – and she’s givin’ ya a different side of her sound & showin’ she’s capable of many great things with this new single of hers.

Right from the very get-go, you can hear that “The Night He Came To Town” takes her into different terrain this time around…you can definitely tell the booming baritone narration isn’t coming from her vocal chords, that’s for sure!  Point is, this single doesn’t hide or shy away from taking Luanne’s sweet voice into an arguably darker, folksier, and storytelling-style of Alt-Country – but it’s how well it’ll suit her that’ll surprise you as the song moves past the opening scene that sets the stage for what’s to come.  While it’s a genre close enough to her past material that’ll easily bring her fans out there along with her for the ride through this new tale of “The Night He Came To Town,” it’s also a single that further proves what an asset Luanne’s voice could be to a whole range of styles & sounds.  And with her collaborative spirit & willingness as an artist to pursue music at all times…well…you just never know where she might end up next…it’s a highly-rewarding approach to her art that’ll always yield something unique in her catalog as a result, just like you hear from her here on “The Night He Came To Town.”  Written by Canadian songwriter Dave Ward, featuring a talented crew of stellar studio-aces to bring the tune to life – including one of Nashville’s most sought-after fiddle players, Christian Ward – Luanne and the skillful players surrounding her make the most out of this mysterious tale.  Lyrically, there’s a real charm to how this story unfolds in the way it’s told through the music surrounding it – but listen close, because you’ll find that “The Night He Came To Town” isn’t afraid to get gritty & grim with its theme & imagery.  As to who ‘He’ is – or what ‘He’ is up to in this ‘Town’ on this particular ‘Night’ – theories will vary; just like they should in a good story, you get the opportunity to thread your own conclusions into this tune as to what it might be about exactly – or WHO for that matter.  What works is the imagery in the lyrics that allows your mind to wander with this story and fill in those blanks so effortlessly…”The Night He Came To Town” is the kind of song you can literally see in your mind as you listen to it.  Luanne brings a more intimate & personal touch to the storyline…like, she owns the words in a way that makes this story told come out naturally, like she’s experienced everything she’s singing about and relating the tale to us.  It’s that level of focus & commitment that she brings to any song she’s working on that makes her an asset far beyond what her always-impressive vocals bring as well – she never breaks our suspension of disbelief as she sings “The Night He Came To Town” – and on a storytelling type of tune, that’s exactly what ya want.  Credit to the musicianship & vibe of the atmosphere as well, because it’s smart writing all-around that really ties this song together in such a compelling way, and it’s the capable players that make the magic happen in the music itself that keep this clever & twisted tale as compelling as it is.

Bonus points for the fantastic fiddle playing, the essential bass bouncing back & forth throughout the tune, and the guitar absolutely stands out for all the right reasons; from tone to style to skill, it’s all there – and you get a real highlight around the two AND three-minute mark for a solid solo.  You’ll find the instrumentation really comes alive and has a story of its own to tell throughout “The Night He Came To Town” – you can’t argue with the execution here from any angle – this is a highly interesting tune that pulls you right in to listen.  Whether it’s the music, the lyrics, the vocals…you name it and you’ll find a quality reason to listen to match the desire for what you want to hear.  Luanne is as spirited as ever and clearly stepped into this song with the confident performance it deserved; don’t forget people – she’s the star of the show here – and it’s ultimately because she does such an exceptional job of her vocals on this song in the first place that we get so invested in each and every word we hear.  She finds the heartbeat & pulse of the mix of mystery & melody the writing was calling for, and much like you’d expect if you’re a fan of her music already, she delivers with professional passion from start to finish.  It was a good move for Luanne to challenge herself this year with a new twist to her catalog, music, style, and sound…the results of what’s been accomplished in the all-around tight execution, impressive instrumentation, and stunning vocals & harmonies of “The Night He Came To Town” confirm that, 100%.

Find out more about Luanne Hunt from her official homepage at:  https://www.luannehunt.com