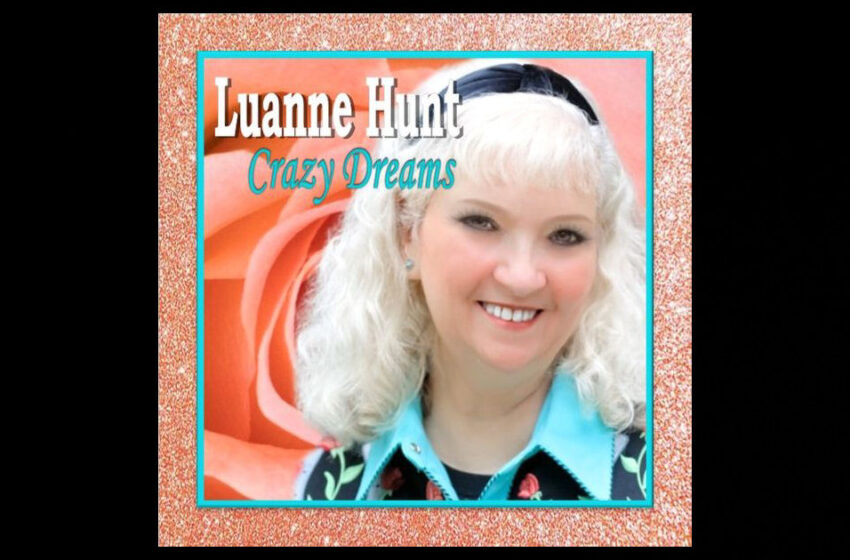 If you’ve been paying attention to these pages of ours over the past several years, from around way back in good ol’ pandemic-less 2018 on-forward…you’ve probably noticed that a guy like myself born Grunge has always been in the corner of a downhome Country artist by the name of Luanne Hunt.  And YES…that support continues on today, proudly!  Not because I know her personally, not because I’ve all of a sudden become the world’s biggest County music fan either – my support’s always been genuine, because of the simple fact that Luanne has always put her heart into her music & she’s great at what she does.  Anyone that assumes my adoration or a positive comment would only be a reflection of my own personal taste would be insane to think that at this point in closing in on my 2500th review here this year at SBS.  All I am, and all I have ever been, is merely a reflection of what’s out there in our music-scene.

And sure, that’s where it all generally starts, as it has for so many of you over these years in finding me here however ya did at sleepingbagstudios…but if you really know me well, you know I always love more to the story.  Hearing songs like “Lightning In A Bottle” from her album Backroads, Bottles & Blues that she co-wrote largely with her longtime husband Steven Bankey was a great way of getting to know her at the beginning…songs like “Christmas Without You” showed that she could even break my Grinch-like spirit when it comes to holiday tunes – one way or the other, she’s always impressed me through her sincerity, passion, and remarkable dedication to the craft she clearly loves so very much.  As the years continued to go by & time marched on, we experienced a groundbreaking record from Luanne called Season Of Grace – a record that ended up also marking the heartbreaking departure of Steven from this world, may he rest in peace.  To be truthful, I don’t really know what I thought around that time.  I know her music came out phenomenally inspired on that record, but if I’m really thinking about it, I suppose I surmised there was a chance that might have been it for Luanne Hunt and her music; after all, it wasn’t just her husband she lost; he was her best friend, confident, co-writer, & cohort in this whole business.  I’m not saying I doubted the sheer strength of Luanne or her ability to carry on – I’m just acknowledging it takes a superhuman individual to actually be able to do that…carry on…but that’s what Hunt really is.  Essentially, as sweet as her voice can be, make no mistake, she’s got the true grit to match, 100%.  She’d go on to prove that with her single “We Rise” from last year, a song that confirmed she was down for a moment & justifiably so – but she’s never been out.  That entire tune spoke volumes on behalf of a spirit that cannot be kept down, no matter what life wants to throw at her.  Call me crazy, but that’s inspiring.

Her new single “Crazy Dreams” isn’t the first time she’s crossed paths with the history of the music made by the legendary Patsy Cline either – Luanne’s “Christmas Without You” was originally intended for Cline’s catalog as well.  Often referred to as the ‘lost Christmas song’ because it never got recorded – Luanne did a fantastic job on that cut, just like you’ll find she does on “Crazy Dreams,” which was indeed originally performed by Patsy herself.  I’m a big believer that paths crossed multiple times provides you with insight into how everything connects together, and it’s certainly clear that Cline has had a massive influence on the music in Hunt’s career, especially with this new connection now revealed here in this cover tune.  Right from the drop of moment one on “Crazy Dreams,” you’ll feel the warmth come through the guitars immediately – and through the production giving that classic space between the vocals & music as it all clicks into gear, you can hear that Luanne’s got a faithful rendition here that echoes the style of the original times, while also giving it just enough kick to make it new for us all again.

I know I tend to ramble a ton when writing these reviews…but there’s a reason for all that, I assure you.  I could edit myself down to an article of 500 words that wouldn’t have a genuine thing to say in it like just about everyone else out there does, but to me, wherever it is in your mind, thoughts, or feelings that a song will send you, is 100% valid and just as important to communicate, no matter how scattered it may seem or how hard it is these rantings might be to follow.  It’s in saying this, that I gotta say – knowing Luanne’s story, all she’s been through over the past years, how she’s loved & lost & managed to carry on & continue making the music she’s always been destined to make – well…I’m just sayin’ – I think you really have to admire her song selection when it comes to this cover she’s chosen and how close to home it really hits.  “Crazy Dreams” is essentially all about seeing that person you loved & lost while at the mercy of the sandman in the serenity of your slumber, or even just missing them on a more general level…and it’s all perfectly suited for Luanne.  When she sings this song, I can guarantee you that after reading this summation of her story & career, you’ll hear just what I’m hearing – and that’s authenticity – she’s absolutely had these “Crazy Dreams” before herself, and it just so happens that Cline had the right song already out there to detail what this experience is like.  The point is, that connection between the words & the artist singing them here feels every bit as genuine as if Luanne had written every syllable herself – and that is exactly what will make “Crazy Dreams” really resonate with so many of you out there listening to her cover of this Patsy Cline tune.  She handles this song exceptionally well with bold & sweetened tones that head straight for the heartstrings, and delivers a performance that sounds like she’s lived every word of what she’s singing about – because in so many ways, she has.

The official word on the street is that Luanne is getting set up for another incredible milestone year in her music career as she continues to push forward, soldier on, and honor the legacy & commitment of what she and Steven had started so long ago.  Hunt’s moved to Nashville now…I’m just trying to think if that’s any kind of good place for a Country music artist to be…let’s see, lemme think…lemme just Google that for a second here…OH!  THAT Nashville!  The music mecca of Country – that one.  Kinda seems like a perfect fit I reckon, and wouldn’t you say as well?  Sounds like Luanne’s hard at work on a brand-new record to be released in March this year, which will indeed feature this lead-single/cover of Cline’s “Crazy Dreams” on it for you all to enjoy, along with a rumored five additional songs to go along with it.  Or at the very least, that’s what I know, or what I think I know, for now…lots of time in between now and March, so things might change, that’s always a possibility – I’m just passing along what info I can find so you fine fans of the classic Country sound will be ready to keep your eyes & ears on Luanne Hunt’s pages & anticipating the release of her new record just as much as her existing fans already are.

She’s got her heart & soul in the music she makes and that always rings true; it does on “Crazy Dreams” as you’d well expect it would – Luanne Hunt is a tremendously passionate artist, fully connected to her craft.

Find out more about her from Luanne Hunt’s official website at:  https://luannehunt.com