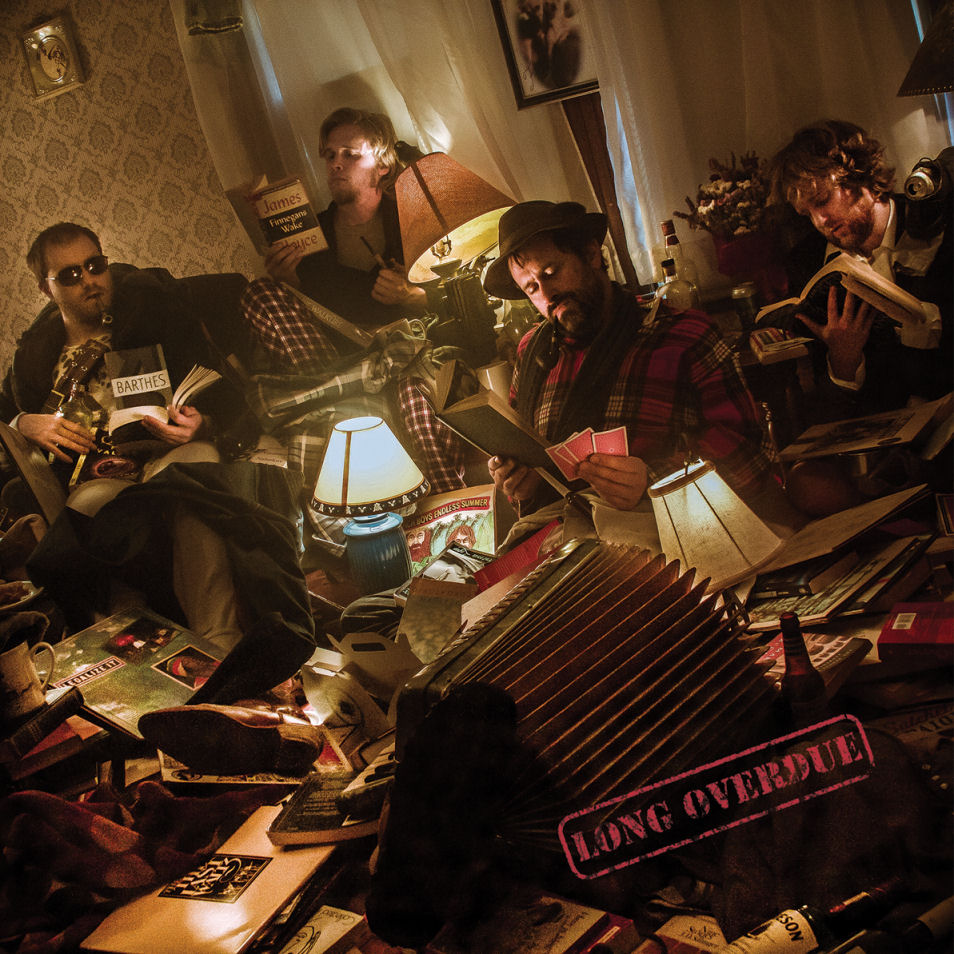 If you’ve been following along with anything/everything we do lately, the name Lovers Of Fiction will certainly be familiar to you. I’ve been a big supporter & fan since hearing the supreme amount of effort this band put in on their pre-released singles for the Long Overdue album, “So Simple”/”Another Song.” This band based in Portland, Maine, had me convinced right then & there that I was listening to something special after taking in that split-single…and as it turned out through the research of that review, we learned there truly was some real-magic at work in the music; it was/still-is created by a professor and three of his former students. I still think that’s just beyond-freakin’-cool – and considering my first thoughts always put me assuming a project comprised of players that find themselves in manners of proximity like this might sound like The Partridge Family or something along those lines…what a relief it was to hear Lovers Of Fiction making such incredible songs & sounds that resembled no-cheese, all fresh & no musical-mould!

I made comparisons to the Zappa-esque-ness of the music made by these four when reviewing them the first time around and listening to “So Simple”/”Another Song” – and I stand by that once again as Long Overdue opens with “So Simple” and moves into “Superhero Chin.” I mean…seriously…if you can’t glean the Zappa-influence from a dude that is writing about the defined-chin of a superhero…you’re missing that and most likely a lot else when it comes to the clever way that this band writes their material. The drums are fantastic, as are the vocals in this tune along with their harmonies…but it’s really the way the Lovers Of Fiction snap and bounce to their complex rhythm on “Superhero Chin” that makes it truly pop & stand-out. Well…that, the overall melody and of course, the brilliant saxophone being played in the background of this musical-madness – it’s incredible!

All these positives aside…I know what a difficult ‘sell’ music like this can be to the average-set of listening ears. Many people I’ve even played Lovers Of Fiction for myself personally here at the studio have looked at me like I’m half-crazy and start to raise their eyebrows. Music like this is often polarizing due to its busy-nature…and often can be a little ‘too much’ for the ol’ top-40 crowd. And you know what? Fuck’em! “Throwaway” scales it back…at least for a little while as it begins…and those looking for something a little less complicated, inventive, innovative, unique and new can MAYBE get themselves behind the first half of the song. Buckle-up though folks…cause all those wonderful words listed in the preceding sentence will absolutely come into play as the song progresses! I’ll put it to you this way…for what I personally love/was expecting from Lovers Of Fiction…I was almost unsure of “Throwaway” from its first ninety-seconds or so…it wasn’t until they brought this tune to a roiling-boil that I realized just how far the song had come in its short lifespan. A truly impressive song & composition when you take it all in…which, mind you, you SHOULD…don’t be tuning-out or jumping-in at the halfway-mark…sac-up and venture into the unknown with Lovers Of Fiction.

In both “Throwaway” and in “Everybody Wants To Be An ENFP” they reminded me of more of a cross between something like the Spiders From Mars-era of David Bowie meeting that Frank Zappa flair for musicianship and sleek, jazz-inspired compositions. “Everybody Wants To Be An ENFP” is certainly one to cite for its skill – the drums, the keyboards…MAN do they ever get their moment in the midst of this gigantic song! Rising to the call – these side-by-side solo-efforts fill a large portion of the song…and you know how those extended solos go for those mainstream-ears…but let’s face it – if you’re still with Lovers Of Fiction and Long Overdue at this point in the album, you’re plenty secure with the sound and frantic, crazy-antics & dynamics of the music they make. As for the rest…again…you’re missing out!

I personally LOVE how full this music is…and yet how properly spaced-out it is in the mix and through the precision-musicianship of these guys. It makes a song like “Lost Weekend” feel like it’s longer than it truly is…not in any kind of a bad way whatsoever…more like the snack you thought wasn’t going to hold you to dinnertime but turns out to feel like a full-meal in between meals. Satisfying. I dig the playful-abandon that’s put into the sound of the piano in “Lost Weekend” – almost similar to some of the wilder-moments from Ben Folds Five…it’s a bright, rich & beautiful approach and resulting melody. In that breakdown in the middle…you’ll hear another example of where I’m pulling that Bowie comparison from this time around. Wild vocals, great harmonies, trumpets and drums that sound like they’re being played by Dr. Octopus – you gotta love it.

Direct in the middle of Long Overdue, is “The Bear Part 2” – and while Lovers Of Fiction still branch-out at the song’s ending – for the most part this tune remains a lot more subdued, comforting and familiar through the larger portion of the song. It’s still got some pretty epic left-turns & twists in the music you won’t see coming even in its more minimal-moments…but the subtle-nature of this Americana-tinged tune has a gentle-nature to it that sounds completely inviting. As “The Bear Part 2” continues on to its massive-ending, Lovers Of Fiction once again put clever, complex and passionate-playing on full display as it pounds out the final beats, tones & notes.

Not only have we reviewed “Another Song” through the past here on the pages, but we’ve also played the song on the SBS Podcast with Ryan & Jer – so you already know I love this one…and I still do. I think it would make for a truly epic-finale in a live-show…maybe I’m crazy…I dunno…I still really get that ‘last-call at the bar’ feeling on this one…and I love it every time I hear it. Written by Jimmy Dority…it’s amazing at just how well his own writing-style resembles the overall sound & vision started by Dan Sonenberg the professor…absolutely cohesive with the rest of the material and music they make and still one of the tunes to really shine on this record. Dude gets an A+ for writing, correct professor?

For myself, “Friend And Lover” was probably the hardest song to love on Long Overdue. It’s got a tough spot in the line-up coming directly after “Another Song” – but something about this tune sounded a little more pushed together than the rest did. You could compare this one to something like The Beatles “Help” meets Bowie’s “Ziggy Stardust” – the melodies are familiar & warm, but some of the spots in this particular tune I felt were able to shine much more brightly than others. Still a good song…and again, it’s in a tough spot – the following song “Big Boy Walking” kind of commands the attention instantly with its bass-grooves, vocal-melody/theatrics and wild-trumpets springing the energy back to life. This song definitely has a large presence that can’t be ignored…and why would you wanna do that anyhow? You can’t ignore innovation and creativity like this…pass or fail for your ears, you’ve gotta appreciate just how much pure skill & effort have been put into this music from Lovers Of Fiction.

“Old Man In A Rainstorm” is a perfect title for the forlorn, desolate sound of this melody and set of lyrics. It’s a downtrodden sound…a sad song & great story…and though it will sparkle & shine in moments, for the most part, this is a tune of acceptance and personal-reflection; and sometimes there can be both good and bad in that. This song…as it ranges through the different parts of the music and chapters in the story-told…really hits the nail on the head as it strikes the emotion to match the energy, mood and atmosphere of the themes in “Old Man In A Rainstorm.” Of all the tunes on this record to be somewhat ‘slower’ in tempo (at least in parts!) – I think this is the one that came out truest to the idea/vision/concepts behind the song – excellent. It’s also the longest song on the album, and the final two-minutes or so…they’re just incredible! Hypnotic in their vocal rhythms…and again…those DRUMS…Mark Dennis…I don’t know what they feed you guys in Maine…but I’ll be damned if I don’t assume you stay completely in-shape just from playing the music in this one song alone!

“Old Man In A Rainstorm” truly transitions directly into the beginning of “The Alligator.” If you were to start-up “The Alligator” on its own…it would actually begin with the final end-bits to “Old Man In A Rainstorm.” That ability to connect the songs and let the album flow as it does there is a genius-move and really takes you smartly into this final cut…which is actually radically different from the song leading into it. A much more…hmm…Billy Joel-esque melody here in the vocals at the album’s end…the good Joel…the earlier-stuff…but nothing quite as ‘straight-ahead’ as he’s ever written of course. Lovers Of Fiction put a carnival-style celebration on here at the end of the record – it truly sounds like they’re collectively enjoying the victory of creating, writing and finally putting out Long Overdue.

I think that waiting…no matter how long it took for them or how Long Overdue it was… it was certainly worth it if it got them all to here today – there’s enough talent in each of these players to be their own entire-band; and with the four of them working together…the size, scope and creative-heights the Lovers Of Fiction could expand to become so massive…that over time, could very-well consume us all!