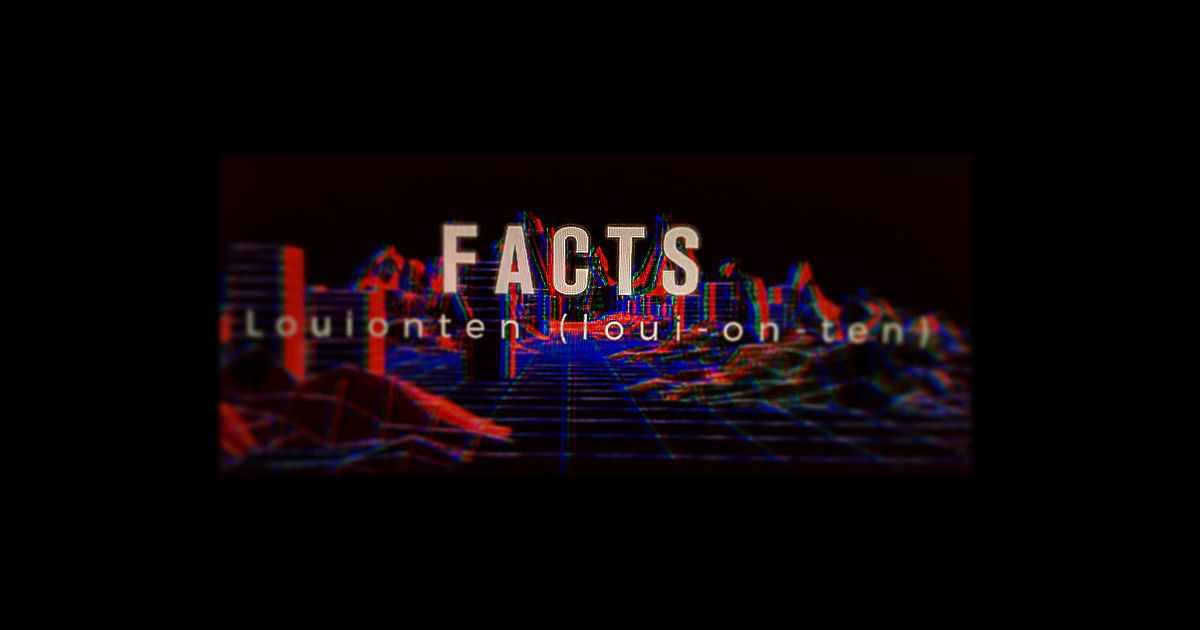 I mean…I don’t want to brag y’all, but if you read the last review I wrote on LouionTen’s single “Son Of God,” then you know I already told ya to expect BIG things from this emcee.  He was just breakin’ out onto our pages with that cut…and it was instantly apparent from the level of skill on the mic & detail in his words that LouionTen was absolutely heading in the right direction from day one with his music.

“Facts” confirms everything I said & more.  I’d probably argue that as far as the Rap game is concerned, LouionTen likely has one of THE singles to remember here in 2019 with what he’s pulled off this time.  You can beat the confident way this emcee approaches the mic, full-stop.  That’s the “Facts” right there.

And here we are now.  This is the second cut I’ve heard from LouionTen and the second time he’s not just hit a homerun, but cracked it right out of the park entirely.  He clearly just gets it on a level that other artists don’t; I’ve got no stake in his claim or reason to pump his tires…LouionTen’s a great guy & all, but if there was something that needed to be pointed out to make his music any better than it is now, I’d be sure to tell him.  “Facts” are, there just ain’t – this dude’s already making songs like a verifiable all-star…and he’s chosen really wisely with this beat he’s workin’ with, produced by MusikDae.  With all that savage low-end sound you’re looking for to get your speakers rumblin’ & set the party off – LouionTen comes out bossed-up with a gripping tone of voice that tells you he means every word he’s sayin’ on “Facts.”  I mean…it ain’t called “Fiction,” you feel me?  It was crucial that on a song called “Facts” that LouionTen sounded large & in-charge…that’s the energy that these words & beat required to tie it all together.  He’s obviously not one to disappoint – LouionTen is laser-focused & razor-sharp.

Again…these were “Facts” we knew from the previous single “Son Of God,” which flexed his finesse on the mic in a much more minimal setting – this new track brings along a powerfully dynamic beat that couldn’t possibly be denied by any pair of ears out there listening.  It’s slick, it’s sleek – it’s still got a minimalist feel to it & not overly-stuffed, but there is a more tangible vibe that the people are gonna latch onto for sure.  The way the hooks interact & respond to the bass in the chorus of “Facts” is pure audio-awesomeness…that’s what that is right there y’all.  Lyrically, he’s aces yet again on his new single, puttin’ in significant detail into the words and always able to get across what’s on his mind, exactly how he’d want to say it without compromising for the sake of a rhyme or something rookie like that.  Like I’ve been tellin’ ya, LouionTen is all pro, all day…to think of where he’s starting on such solid ground already makes you seriously marvel & wonder at just how far he could take his music in the future.

Because if you were to ask me…and it appears that somebody did…I’d tell ya this guy is leading the way in the right here & now – “Facts.”  Listen to the stylistic way this dude glides over these bars!  Listen to the swagger, the confidence, the precision – the innovative way he raps – and absolutely key moments like how he transitions into the chorus of “Facts” so brilliantly…for real, he just slides right in there and gets the complete maximum potential out of the hooks you’ll find on this single-worthy cut he’s created.  Definitely music that suits his strengths 100%, MusikDae’s cut sets the perfect stage for LouionTen to get the most out of the wild & diverse structure of the beat and pop right off it with his words to make a serious impact on each & every one of us listening, because these lyrics literally jump right out of your speakers as a result.  He’s even stepped-up his video game this time around – the lyric-vid cut for this single glides as smooth as this whole song does & complements the vibe with solid visual entertainment.

He’s an emcee making genuine moves that matter…the X-factor is strong with this one – “Facts.”

Make sure to stay connected with LouionTen – visit these official links below to make that happen: