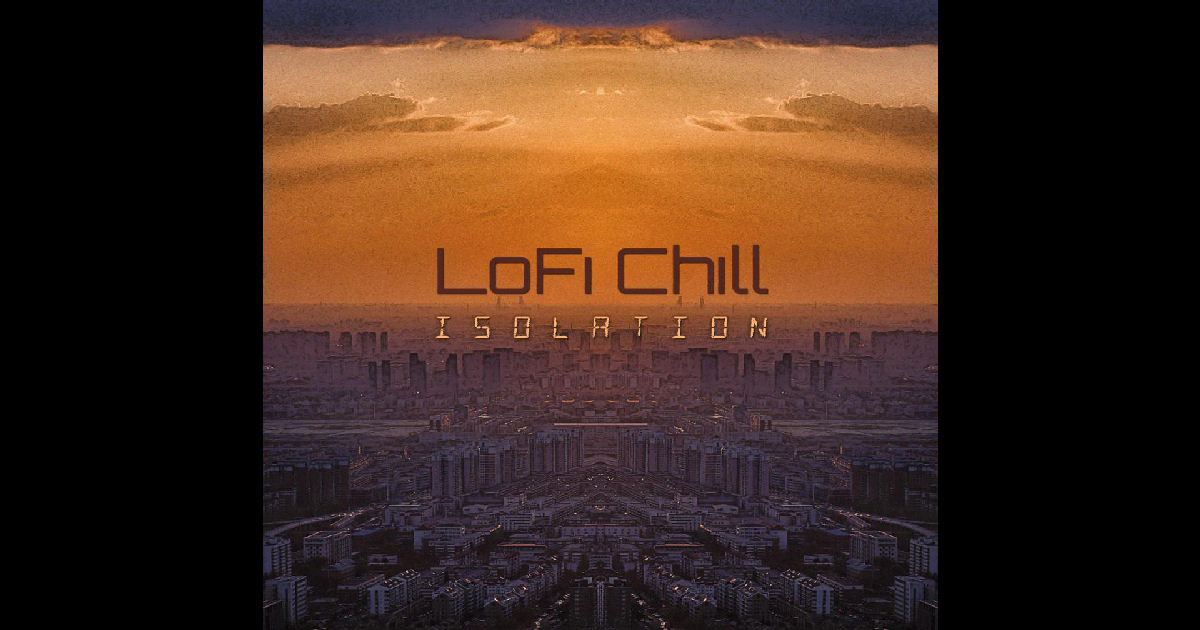 Here’s the scenario…chances are, if you’re like most people out there this year, you’ve probably had yourself a very long day.  Let’s face it – you work hard doing what you do, you’re all good people and you probably ALL deserve a freakin’ break from the everyday grind, wouldn’t you say?  You know it’s true – but thankfully, wouldn’t you know it, I’ve found just the thing for you to relax and unwind!

That’s what’s in it for YOU as a listener…LoFi Chill is going to set your entire mind, body and SOUL at ease with the new tracks on what is the 4th official release from this talented U.S. music producer.  What’s in it for LoFi Chill specifically…sounds much more akin to a sort of self-prescribed musical-therapy taking place.  Reading about Isolation, I had notes that described the record like this:  “Isolation is an album about feeling a deep sense of disconnection while living in heavily populated urbanized areas.”  It’s always cool to get an idea of what a record that is largely instrumental or electronic is based around, concept-wise; some of the titles of the songs on Isolation will certainly hint at the overall theme.  That being said…I also noticed that, while that direct-quote does a great job in describing what the album is about at its core…I also happened to notice that it doesn’t mention whether or not that ‘disconnection’ necessarily implies any kind of bad thing at all.

In fact…well…I mean…I’m just saying, if I made music this good on my own I’d be fine in my Isolation and never leave the house again, straight-up.  LoFi Chill has got a sound that I wish came through my speakers each and every day – Isolation is full of killer low-key vibes and hot bass-lines, all designed to flow so smoothly that you’ll have little choice but to listen…but have no fear, you’ll definitely want to.

From the dreamy opening to “I Don’t Want To Let Go,” to the killer combo in the rhythm section in the bass & beat, to the use of electro-accents in the music and cleverly filtered vocal-samples, LoFi Chill immediately welcomes you warmly to the new record.  There is something so blissfully warm to the production of this track and the overall sound is so massively inviting; all of the care & precision was there on display from moment one – and so strongly that this first fresh cut convinced me instantly that I’d likely love whatever else came after it.  And those gut instincts of mine, were completely correct – it’s all chiller, no filler here on Isolation – this record is a serious breath of fresh air and expertly assembled.  To hear such an impressive start to an album…what can I say…”I Don’t Want To Let Go” already contains the majority of sounds I wished spilled out from these speakers all day, every day; it’s a fantastic start.  I absolutely LOVE that LoFi Chill has such incredible bass-lines kickin’ in this opening cut and think the use of the vocal samples is perfection…like he’s given us just enough to hum along with as we’re groovin.’

“Something Out There” also makes incredible use of vocal samples as they pop-up and speak/sing-out the title of this tune as it plays.  That strategy comes into play a few times successfully throughout the album, you’ll see that similar approach in the following tune “Don’t Go Changing” and many of the songs from this record…but I dunno…there’s something that really works in keeping those vocals limited in how much of the spotlight they can have, because the music & production are certainly equal stars of the show.  Like for instance, you can hear the sounds of nature often trickling through the background like at the end of “I Don’t Want To Let Go” and “Something Out There” – it’s tiny threads that run through the songs of Isolation so cleverly that lead the whole record to an insightful amount of balance.

And it’s FUN to listen to, just as much as it is vibrantly chilled-out.  From the melodically-twisted vocals on a track like “Something Out There” to the playful bounce in the beat of the music on a cut like “Don’t Go Changing,” I found there was always something so amazing happening in the sounds LoFi Chill was coming up with that I had a MASSIVE grin on my face listening to this entire record.  Whether you got your bong out or a nice glass of wine, a beat and rhythm like “Don’t Go Changing” hits the spot.  I love the slightly off-kilter piano tones and how much texture and life they add to the atmosphere and melody over top of the rhythm with the bass-lines killin’ it as always – and those flute sounds that eventually come in for the final minute or so are pure genius.  “Don’t Go Changing” is a sweet combination of jazz, light funk and electro, all rolled into one – try to tell me you don’t want some of somethin’ described like THAT – you KNOW you do!

“Can’t Feel” keeps the record spinning in all the right directions.  Heading into sonic territory like you might find in Prefuse 73 or in the music of Lemon Jelly…if you’re a fan of electro-tracks that use vocal-samples brilliantly like another sound or instrument in the mix…”Can’t Feel” is gonna hit the mark for ya.  I know it SEEMS like I dig every song…and that’s truly because I DO…I’d offer any advice if there was any to give LoFi Chill – but there ain’t; you can hear from songs like “Can’t Feel” just how completely in control he is.  The structure and flow of the songs on this entire record have such widespread, accessible appeal that it’s nearly impossible to describe.  There’s not a mistake to be found on Isolation.  “Can’t Feel” adds a bit more tangible emotion into the mix and a bright, versatile electro-melody to guide the vocals along…clever, playful breakdowns full of creativity…and whatever is taking a solo around the ninety-second mark is without a doubt my favorite sound in the entire song.  And I have NO IDEA what even MAKES that sound!

How dope is the bass-line that runs through “You & Me?”  That’s the groove right there…not just a groove, THE groove.  LoFi Chill continuously has epically smooth flow and movement running through the veins of his music…with Isolation putting out such a relaxed vibe the entire time, a slight spike in the energy like you hear on “You & Me” becomes extremely noticeable and a welcome transition in the record.  It’s like the perfect bump in the uplifting vibe to occur right in the middle of the record and get its second-half rolling in the right direction, keeping everything on track from where it all began.  Flowing perfectly out of “Can’t Feel” and directly into the insatiable groove that “You & Me” provides – it might be hard to separate one highlight from the next on this record for the most part, but this track really sets itself apart by at least 10% more than any other, in my opinion.  The killer rhythm in the low-end, the brilliant vocal-samples, the warm glow of the electro tones in the background…there’s simply nothing out of place and nothing not to love about “You & Me” – that’s a groove everyone will dig 100%.  Unreal flute-like sounds that take the entire track to the next level in a solo-moment before “You & Me” cuts back into its main groove for a solid run-through once more before the end – SATISFYIN,’ YES SIR.

Compared to the rest of the cuts, you get a few more words on “Change Of Heart,” but they’re still used in the same clever way that LoFi Chill has been executing so flawlessly throughout the entire adventure.  The extra layer of synth that comes in just prior to the ninety-second mark raises the stakes and evolves the structure of this tune even further, bulking-up yet again as the beat comes back in.  I’ll say this…I’m not so sure that “Change Of Heart” was really any kind of drop in quality in the writing, performance or production by any means, but for some reason it did feel like each time I spun the record that it had a harder time standing out than the rest of the tunes seemed to.  It’s hardly a complaint by any measure – these are eight fully amazing and perfect tunes yes, but we’re still bound to have our favorites right?  I liked “Change Of Heart” ALMOST as much as every other tune – and I’d certainly argue ‘til the last-man was standing that it’s a song that fully belongs with the rest on Isolation…it’s just an innocent observation, that’s it, that’s all.

“Some Love” probably has the most abrupt transition into its beginning from where “Change Of Heart” leaves you off, and even THEN this record still flows flawlessly.  I mean, it’s certainly not jarring by any stretch, it just pumps out a different sound as it chimes into its beginning, sending us in a new direction and dimension of sound found on Isolation.  With bright electro-tones and a swirling atmosphere that all seems to come together in a remarkably comfortable way, even at the music’s most full you can always tell that LoFi Chill has a complete handle on the decks at all times.  Dude navigates through different ideas and immaculately explores the themes and sounds that drive this entire album perfectly.

Brilliant use of the vocal-samples in the final track “Don’t Care” – they steal the show through the incredible movement they’ve been given by LoFi Chill in how they’re edited together & used just like an instrument or another electro-sound in the song.  This entire experience flies by all too quickly.  I’d complain more if I didn’t have the ability to repeat the record over and over and OVER again, but I can…so even in the short less-than three-minute doses that each cut from LoFi Chill provides, I was cool with it.  There’s an exceptional cohesiveness in this entire album that is pretty much award-worthy…Isolation flows so perfectly that sending this record into repeat is a complete given and practically a necessity.  Ending it perfectly with one last electro-statement in “Don’t Care,” which likely sums up the entirety of the themes on Isolation and the mindset of its creator in just those two tiny words and single phrase; you get a glimpse into the attitude of LoFi Chill in the album’s final moments and realize that this dude is making the music he truly wants to make.  Like I mentioned at the beginning of this review – nothing about the description of this record in the quote from LoFi Chill said anything bad came from being in Isolation…and in fact, I think this record proves that much good can actually come from it.  There’s just the right amount of everything inside of every song…nothing too full, nothing too bare…it’s all about balance.  Dude can stay in Isolation as long as he wants to as long as he surfaces every once in a while to release something as perfect as this, that’s fine by me.  I’m completely thrilled about what I’ve heard from LoFi Chill from the beginning to the end of this record – I seriously believe this is a project with a great future and music that everyone out there would ultimately enjoy every bit as much as I did.

Find out more about LoFi Chill from the official pages below!