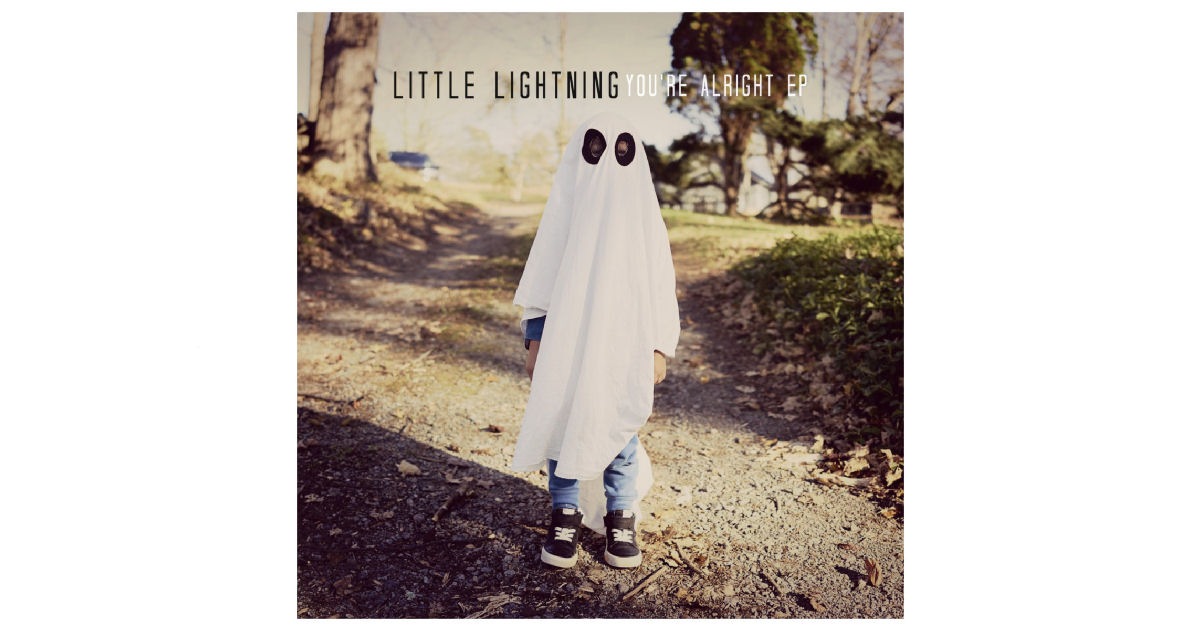 There are a couple age-old adages that apply to this record, and to Little Lightning as well.  One that refers to the material on the You’re Alright EP – which would be the whole “a good song is never finished, only abandoned” quote; and the other more in reference to the band itself – “if at first you don’t succeed, try, try again.”  Or we could just use Bowie’s “Ch-ch-ch-changes” and leave it at that.

Many of you artists & bands out there have fought the branding battle, and/or tried multiple names, lineups, studios, producers, mixes, masters…the list could go on & on…the bottom line is, sometimes it takes more than a minute to find the right ingredients to the ultimate recipe.  In this day & age, we’re often left with the task of figuring out if it’s better to continue on with a name that doesn’t quite suit the needs or sound of a band, or leave it all behind, no matter what may/may-not have been achieved yet.

For example…even pre-internet, Nirvana didn’t become Nirvana overnight; they went by multiple names from Ted Ed Fred, to Pen Chap Chew, Fecal Matter, Bliss, Skid Row, and probably a shitload of others before selecting their final moniker.  And yep, lineup switches & all that occurred as well; even for a band that seemed to come straight out of thin air by the time they hit it big, they had a massive history already behind them, filled with changes in a sincere attempt to get the right…well, the right everything.

Kyle Schepens of Little Lightning knows all about change – the dude has lived it and learned from it, ever since I met him way back at the beginning of the sleepingbagstudios days.  I’ve personally witnessed him go from a solo artist, to a full band, to an entirely different band called Aztec, to a new lineup once again, now being called Little Lightning.  I think I’ve got most of this story correct…the dude makes moves, that’s the point…he’s never been one to sit still and has consistently had a ton of music on the go at all times.  Some of his projects like Kyle Truelove & The Heavy Hearts came and went quickly – others like Aztec, I’d have assumed would be around forever, and was lucky enough to see both the beginning and end of that band before it officially dissolved…or morphed rather, into Little Lightning.

Not even kidding – I was among the first to see the roots of the first Aztec songs come to fruition, and even though SBS is on the east side of Canada these days, I still ended up going back home this past summer and had the opportunity to watch their final show and literally change to Little Lightning at the very end of the set.  It’s been an honor to be a small footnote in Kyle’s story somewhere…I’ve been a fan from day one, from the moment I met this dude and saw him bust out a track live with an acoustic guitar that had a freakin’ hole punched in the front of it.  Incidentally, he was nominated for a Vancouver Island music-award in that same year for a solo-song he put out called “The Swell” – as in, it’s not just me that’s a fan…he’s got a well-earned reputation for putting together quality cuts with a lot of heart.

And chances are, given the fact that he’s only gotten better & better from there, that he’ll go on to put out his best material in Little Lightning over these next years to come…I’d put money on it – and I was a giant fan of Aztec, clearly, as I’ve already indicated.  Ultimately…that’s probably why it’s so damn easy to love this first teaser EP from Little Lightning…Kyle and his cohorts might think they can fool me; but I only look foolish, my ears actually work fine.  They might have changed the titles, they might have beefed up the mix – but if you were a fan of Aztec, you’d know that Little Lightning’s You’re Alright EP is actually a re-working of the former band’s Black Art & Star Charts EP from late 2016!  What’d I tell ya at the very beginning – “a good song is never finished, only abandoned” – but they don’t have to be, and they certainly shouldn’t be if they’re as solid as what Kyle’s band had come up with back in the day.  Honestly, as a long-standing fan…I’m secretly hoping there’s just as much of a chance that some of the even earlier tunes from Aztec will find their way into the Little Lightning set-lists of the future to come – there’s a treasure trove of material that really shouldn’t be tossed.  Ain’t no harm in taking something old, shining it up, tossing on a new coat of paint, and making sure people noticed it as much as it should have been.  If music’s truly all about timing, as they say, then what on earth could be the harm in putting out a set of songs that perhaps didn’t get the recognition it deserved or the mix you wanted the first time around?  Get back in there, fix it all up, put it back out there.  Shove it into our speakers & screens until we all finally pay attention…to me, that’s completely fair game; if I had a dime for every record I can think of that didn’t get the full props it should have, I’d be a very rich man indeed.  Maybe one day.

But when I hear a track like “Tied Knot” – what else can I say other than that is NOT the kind of cut you could possibly toss?  That’s what you call a keeper dear readers, dear friends…and that’s the case for all these tunes when it comes right down to it.  I ain’t gonna lie to ya, I loved the songs back when I first heard them, I still love’em now.  Is the mix better now than it was before?  I’ll let you guys be the judge of that – I can understand the attraction to a bigger mix on the sound, let me put it that way – it’s the biggest modification you can hear between the previous versions of these songs and the new ones now.  Aside from the titles of course, each one of those got changed as well for the You’re Alright EP by Little Lightning, with “Take What You Need,” “Plans,” “Homemade Parts,” and their debut single “Heavy, Steady” rounding out the set.  Call the songs whatever you want Kyle – call your band whatever ya like too – as long as the music’s still being played in some way, shape, or form, I’m gonna be a happy man.

He’s made a smart move by taking some of the best of his past and bringing it into the present in Little Lightning…a solid nod to the fact that, sure there’s gonna be a whole lot of changes coming, but it’s still gonna be close to the signature sound of the artist we’ve come to know so well throughout the years.  The real key from this point, is making sure to push forward hard from here…for those of us that have been listening for years – we’re still looking for those new tunes!  The You’re Alright EP serves as a solid reminder of a set of songs we’ve already spent time loving, that is, if they weren’t still living on your playlist like they have been on mine.  You can read my previous thoughts & feelings about these songs by clicking here to visit the review from the past if you like…Kyle knows what I think about these cuts.

So here’s what I can tell ya post-EP.  I can tell you I’ve had the privilege of hearing some of the brand-new material that Little Lightning has been working on – and I’m fully confident that Kyle’s music is going to hit its most golden moments to come, based on what I’ve already heard so far.  I’m not going full-spoiler here on them…I don’t wanna give away the titles of the three songs I’ve checked out so far, cause good lord knows those could change at a moment’s notice – but I can certainly vouch for the awesomeness to come.  It’s great to have a set like what you’ll find on the You’re Alright EP not be abandoned and come along with this new incarnation of Kyle’s music in Little Lightning…but being the greedy fuck I am when it comes to music, having a full lineup of cuts I don’t know coming soon is incredibly exciting.  In terms of separating the past from the present as well, it’ll be the most defining moment of Little Lightning’s career as well…the real debut for existing fans of Kyle’s music out there, in this new band he’s in…the blueprint for the way forward, from here.  From all I’ve heard myself personally so far – Little Lightning is on a rock-solid path to victory with some great cuts locked down already…I’ve even been spinning the demos I have on repeat, and in theory, they’ll keep getting better.

Every reason to get yourself a copy of You’re Alright whether you’ve heard the songs already or not – they’re refreshed, restocked, loaded, and ready to rock.  As for what’s next for the band from here, there’s lots to look forward to from this band based outta humble Victoria, BC, Canada – be ready, cause Little Lightning is about to strike BIG when it comes to the not-too-distant future, mark my words.

Find out more about Little Lightning at their official website:  https://www.littlelightningband.com