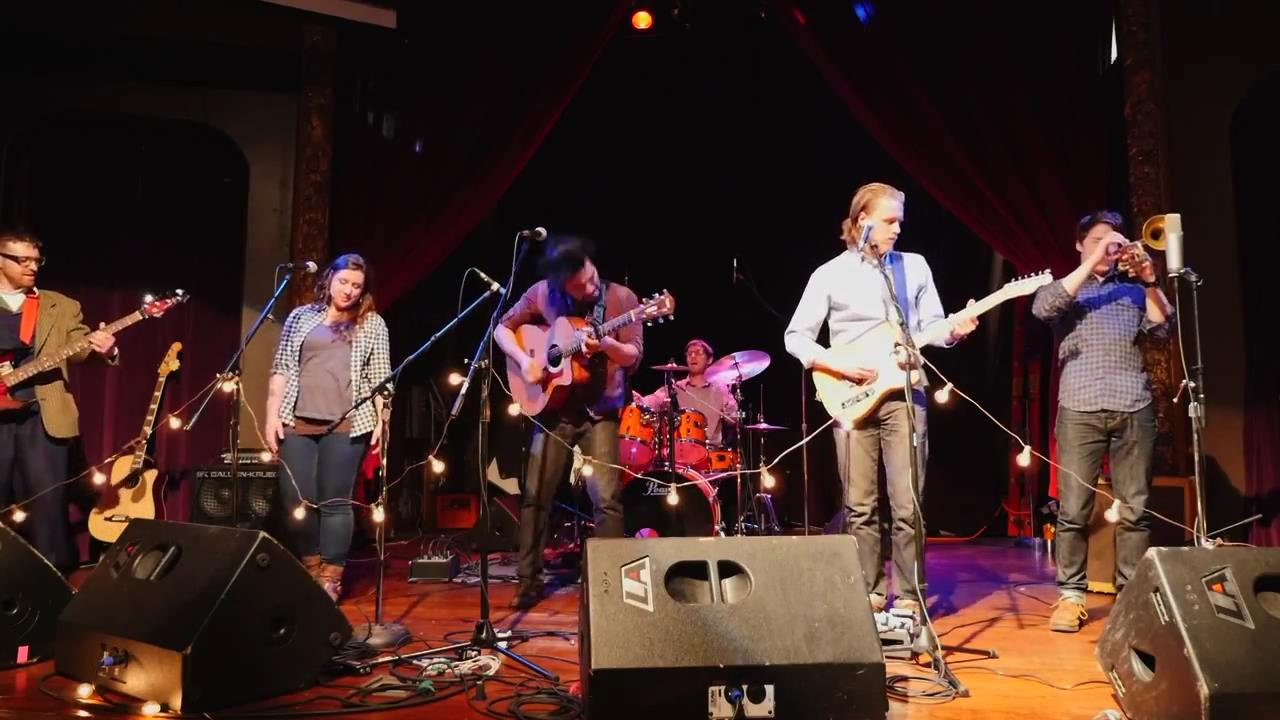 Recorded from a live performance at the end of April earlier this year – Lindstrom And The Limit caught themselves a magic moment to be proud of when playing one of their newest tunes, “Queen Anne.” Depending on the angle the filming captures guitarist/vocalist Aaron Lindstrom from, or wherever you might have been standing in the crowd…if you’re seeing him from any kind of a distance you’d almost swear it was Justin Long finding a second career as a musician. But Aaron’s clearly not on stage for the purpose of making you buy a Mac – and from what I’ve seen from the video/music for “Queen Anne” below, well…personally I’m thankful for that! In a performance that really represents a powerful unity between Lindstrom And The Limit, this video leaves little doubt that they all belong right where they are, up on stage & captivating an audience with their stunning sound.

Everything about this band comes across as refreshingly genuine, humble & appreciative – they’re all smiles and they should be; this is a wonderful song. Revealing itself slowly, Aaron leads the way through the opening verse before the rest climb aboard…then smooth-toned bass & awesome guitar harmonics back the strengthening melody of Lindstrom’s voice as the song begins to thicken. Keep in mind this is a LIVE performance dear readers…so give the guy an inch or two if the tone isn’t 100% solid in a couple of small spots – his deviation from perfect is both human and completely forgivable. Much like an acoustic Eddie Vedder, it’s often just a few dissonant tones that are freakin’ HARD to bend into the right sonic-shape every single time that grab him occasionally – but also like Eddie, it’s the charismatic and charming performance & the emotion in the melody/vocals that turn this performance into gold for Aaron. To see someone put themselves out there as earnestly and honestly as he is here on “Queen Anne” is honestly a real privilege; I can only imagine myself sitting there and taking this one in right in front of my eyes – what a moment this would be to see!

And wouldn’t ya know it – Lindstrom And The Limit is even based out of Seattle! It’d be impossible to live there I’d figure and NOT have a Vedder-esque accent at times – that’s what they speak in Seattle isn’t it? Pretty sure the entire city surrendered their Oxford dictionaries and voted on Vedder replacing boring ol’ English maybe a decade or so ago? I might need to check those ‘facts’…don’t quote me just yet…

“Queen Anne” finds itself even more emotion through the added backup vocals of Julia Stockton, who appears onstage around a minute-and-a-half in. She wastes no time in finding her way into the mix and perfectly compliments Aaron’s vocals…the beginning of this tune is so subtle and easy-going, acoustic-based, chilled-out and relaxed that you’d never fully be able to figure out where this tune will twist and turn to next!

Because wait – there’s more! Approaching throughout the third minute & towards the fourth, the drums come into play, additional harmonies have Julia rising just slightly above and it sounds beautiful. As they fully find their connection at the fifth minute, this acoustic song finds an entirely new life; the trumpet of Ray Larsen is something I could listen to on its own for an entire hour! Six players fully jamming it out on stage as Ray takes over the lead in a solo that you can literally SEE is taking everything he has. It’s honestly been some time since I’ve seen that amount of passion put into the brass – this man deserves some credit for a performance that leaves nothing behind – Ray has put it all on stage.

With everyone fully dancing, grooving & fully feeling the rhythm of “Queen Anne” – the payoff to the building is entirely there in this song and they truly make an impact with this ending. Aaron in particular finds his best set of vocals towards the end with a renewed energy and passion that’s entirely audible. Fantastic ending to a brilliant melody and song – and if this video/music are any kind of litmus test for us, I’d say they’ve passed with flying colours; I’d absolutely LOVE to see this band.

Hmmmm…that gets me thinking…if we were able to get Man Made Lake and the six of their players in here comfortably…maybe there’s a chance we can convince Lindstrom And The Limit to come up north of the border to spend some time with us for an interview in the studio…as I’ve mentioned many times, Seattle really isn’t far away at all! This was a fantastic introduction to a stunning band and I’m VERY excited to hear more of this excellent combination of talented musicians & passionate ideas.

Check out the video below and have a read through the press-release for “Queen Anne.” Links at the bottom for you to find out more too – check it all out!


Rarely does a musician have an excuse to take ownership of our ears for more than four minutes per song. There are a few artists who have the imagination to write beyond an enticing hook that becomes cacophony after a few turns on repeat. Enter Aaron Lindstrom’s ballad, “Queen Anne.” With an eight and a half minute duration, listening to this piece of music seems like a big commitment but wait a while, Give it the license to change your ears and your mind. This is a lyrical story traveling through time, space, and genres.

Written over the course of several years and miles logged, a few desperate heartbreaks and six too many shots of whiskey, “Queen Anne” begins as a folk love song, Sweet and subtle, acoustic and soulful. You’re transported to Seattle, gaze over the steam of fresh-brewed coffee upon the love of your life. A piece of electric guitar pulses through the cords to trace the beginnings of this phantom love story. Then… it pauses. It starts again. Lindstrom’s fresh vocals, fill the void with harmonies reminiscent of Paul Simon. Then… it breathes and begins again. And you’re transported into an entirely different venue of jam-band essence and an incendiary electric guitar solo that brings this ballad to a finish. By the end, this sweet love story is drenched in resentment and heartache, all dripping from the frets.

It’s a bold move. There are at least three songs embedded into these prolific eight and a half minutes melody. There are at least two musical genres threaded throughout. And putting in multiple pauses? Yeah, it’s not a safe move on the part of a musician. But it works.

Lindstrom is not a stranger to lyricism and he’s not afraid to use it. He bleeds the first 30 seconds of the song so prolifically that you won’t even notice the pauses or mind the time. It’s sweet and salty and complex. Its seduction is worthy of the time needed to be contemplated/understood.

There is a dearth of songs that are powerful enough to give you pause. Lindstrom forces you to pause. With rich and robust lyrics taking you across Montana, San Francisco and back to the Pacific Northwest. You need a fade to black to breathe it in, and here is a song with so much attention to detail in each note that Lindstrom gives the listener space to fade up and poised for more as he transitions between stylings and spaces.

Find out more about Aaron’s music & life in Lindstrom And The Limit at their official page:  http://www.aaronlindstrommusic.com/

And if you do the Instagram dealio, you can find him there too at:  https://instagram.com/lindstrommusic/