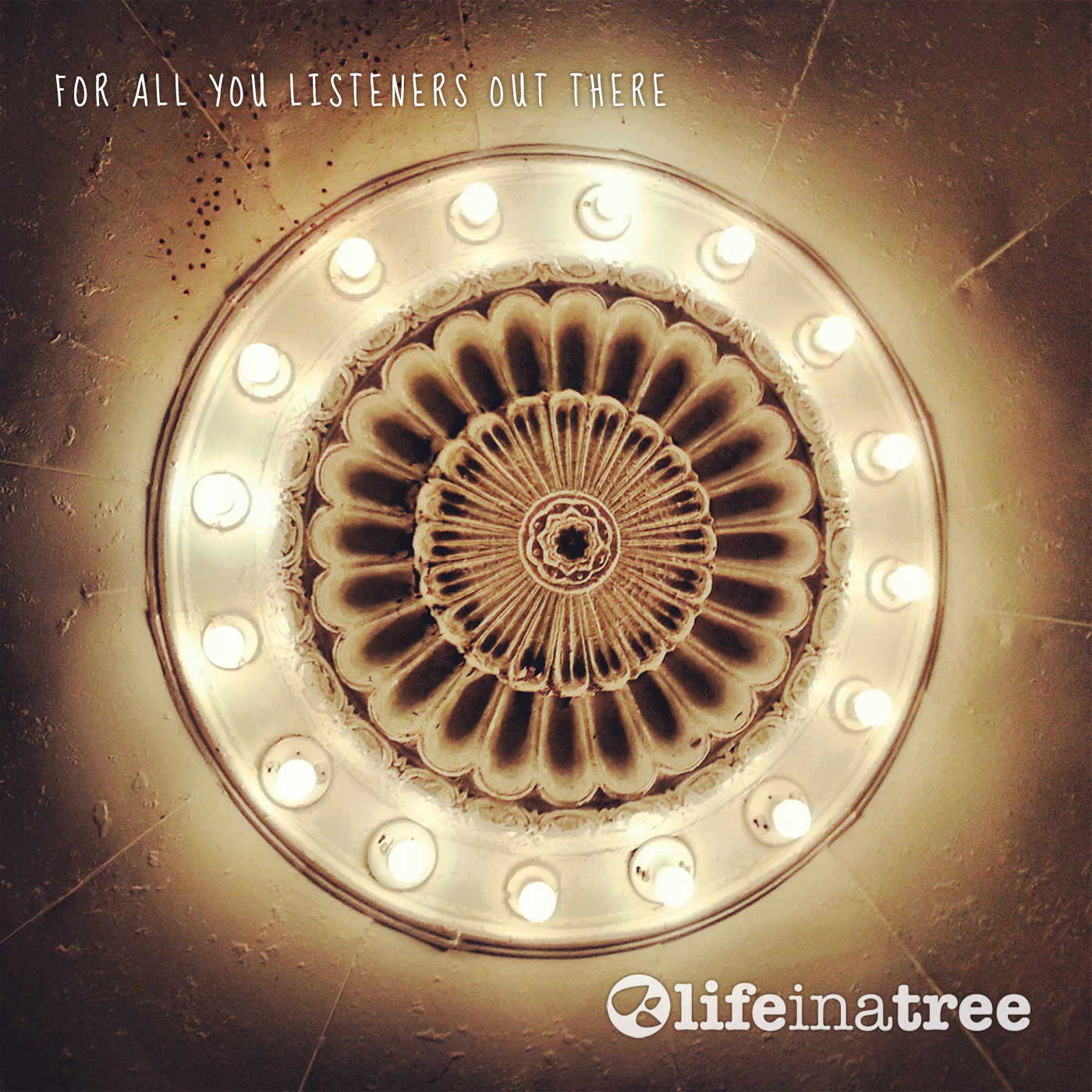 Today’s band in review, Life In A Tree is extremely interesting to me for a ton of reasons I can’t wait to talk about today. First off…if you pop open their social media pages, you’ll find that there’s an incredibly young band at work here; they’re all still finishing high-school. The next thing you’ll probably notice, is what an amazing amount of attention that gets throughout their social media…it would seem as if ‘the machine’ is already arm-in-arm with this band…there’s an immense amount of attention on the career of this band of future superstars.

My question after listening is – does this band NEED a gimmick? And my answer is a flat-out NO. Look, I get it – they’re young – but I don’t listen to music thinking about an age in mind. Surely, there’s zero doubt about the incredible talent that this band already houses at such an early stage in their lives & career…but don’t let that ever be what sells you on this music…or any music for that matter. That’s the marketing…’the machine’…and this band is doing much more incredible work than simply maintaining their youth, let that be said.

‘Cause honestly…some of you out there…some of you adults I suppose…are gonna straight-up CRY when you hear some of the ingenious songwriting on this album and look further into just how hard this band is outworking you NOW.

To be truthful…I’m not too sure exactly WHAT I was expecting here. I’ve already had an introduction to Life In A Tree’s music…briefly…I think around two months ago was when I was first turned in the direction of this new talent. I certainly remembered the name, but knew that I hadn’t heard many songs yet…that gets to change right away with thirteen tracks on For All You Listeners Out There. You’ll hear just WHY there’s a huge buzz about their music right away in the opening track “Reach.”

And guess what? I wanna talk about this. “Reach,” topically, is a beautiful track…but perhaps what it metaphorically symbolizes is something even greater than even they themselves would realize. In this track I hear EVERY key element of the independent spirit…I hear the extreme desire, commitment and unbreakable bonds of a band determined to make it…to “Reach,” for anything and everything, but to give it everything, every time, pass or fail. It’s an incredible song really, and delivered with vocals that leave an incredible lasting impact…in one song they’ve certainly convinced me already that they’re going to “Reach” for songs written smartly; these ‘kids’ are razor-sharp.

“If Only Trees Could Speak,” yeah….RIGHT? If they COULD and they were listening to this track they’d probably say ‘holy fuck dude, turn this UP!’ This low-end thumper again displays some excellent vocals, a really great combo from vocalists Tyler, DJ and Molly all coming together to deliver really thick, melodic, dark choruses. The track itself reminds me a lot of bands like Adema, or Trapt…with the exception that I’d already way rather be listening to Life In A Tree than either of those bands and the way they’ve approached this similar sound. Let’s give a huge shout out to Jimmy as well, who is absolutely kicking ass back there on the drumset. He’ll carry that in to the following track “Objects In The Mirror Are Closer Than They Appear,” this guy alone proves they’re so much more than just ‘kids;’ these drums are full-brunt MAN-thunder. That’s a completely undeniable talent sitting there on the drum throne, one that never lets them down at any point throughout the album.

I like the emphasis on powerful songwriting and great vocals here. “I Have A Problem Called ‘You Disorder’” is just an absolute powerhouse for vocalization and every confirmation that this band doesn’t just have ONE great singer; they audibly have THREE. And if anything is to impress you about the young-age factor, let it be the songwriting aspect of Life In A Tree; these songs are written so well-beyond their years and put together with the touch of a band established twenty-years into their career. Listen to the classic-rock feel that comes with the opening of “3 Hunna Thousand,” and how they transform it to something modern, relevant…and by the end, this track becomes a whirlwind of sonics you would never want to escape from.

And hey Tyler…or ummm….DJ….I gotta admit, I’m not sure which one of you that it is that has the good fortune of sounding a lot like Chester Bennington at his best moments in Linkin Park….but whichever of the two of you that IS…don’t shy away from that sound at all! In “Top Of The World” I can hear it the most…but yeah, Chester’s certainly a valid role-model in terms of incredible vocals.

“The Only Things That Have Been On My Mind Are The Thoughts That You Put There” is like, a paragraph of a title lol.  Aside from that, this is one of the more straight-ahead and furiously-paced tracks that you’ll find on this album.  In a way…at least to me, had this track not found a second-gear towards the two-minute mark, I might have almost accused them of writing something too easy for themselves!  It’s a good song in its own right…love the high-up vocal parts, and that switch to a melodically-infused ending was the choice in writing that separates the flat from the enticing.  All five of them are clearly well-versed music-fans as well, and they’ve written each song, and this album in such a way that a listener is never going to find themselves reaching for the phone-book to read out of pure boredom while this music is on.  It’s written in a clever way that attention is paid through your natural biological inclinations just as much as your growing WANT to.

Now…I’ve already been impressed here with the work of Life In A Tree…but it only goes up a notch when I hear a fantastic track like “Circles.” This might not be what the band would want to hear…most of this album explores an edgier sound throughout, and we all know I’m a super-sucker for beautiful melodies…but this track just works perfectly. After thorough listens…you can also really hear this particular track as a ‘break’ in the album, in the sense that they take it all to a slightly more pop-rock edge from that point towards the end. Going back to “Circles,” for a moment…again, there’s a real magic in the way these vocals come together at the chorus.

Molly shines through brightly on the following track, “Get The Best,” with hauntingly-melodic vocals that fit the mood of the song just perfectly. She’s also the bass-player for Life In A Tree, and with a rhythmically-plunky bass-line, she’s driving this song all the way through, stepping out just a bit further than the other tracks before. Gotta credit their keyboard player Andrew as well…he’s the glue in many of these tracks, no matter how subtle his parts come through at times.

Molly continues to the absolutely gorgeous beginning of “Oxygen.” Again – the diversity of sound on For All You Listeners Out There, the outstanding songwriting…these are the things that should impress you…there’s so much incredible ability and promise for the future here. “Oxygen,” would also be a standout for me…the instincts of Molly finding her way into this track-stripped-bare to only her and a playing guitar are immaculate; it seems no matter what the tempo, beat, or side of the genre that their songs fall on, the quality of their writing never drops and never fails to captivate and bring you in closer to listen.

You also have to remember…I grew up in the heyday of Kurt Cobain and the riot-grrrl movement…a powerful female lead to me, combined with incredible music always makes for an amazing overall sound if you were to ask me. Bringing me right back there is the track “Gravitate.” This is where you’re thankful that you have a Molly at all; the music itself starts out with an incredible indie-feel much more akin to something like Dinosaur Jr., and as much as I might love him as a singer – not everyone digs on the shaky vocal sounds of their lead singer J. Mascis. To have this confident female lead replace that sound, and have them take it to Paramore-like heights by the end is definitely a testament to the ability of Life In A Tree to take existing sounds and truly make them their own.

“Misoneism” features one of the most inventive vocal-flows on this album; it’s a fantastic verse that drives this track, delivered with absolutely perfect tone. It’s staggering really…I can’t help myself even from expecting nothing but constantly bigger and better things to come from these guys down the road. There’s a sense throughout this album that this is still ‘early work’ for Life In A Tree, but by no means does that mean they sound like rookies here…far, far from it. But we ALL start somewhere…and hopefully in most cases, we all progress to that next level.  I have no doubt at all, listening to the final track “A New Place To Be,” pound out its final beats, to its vocal-break, and screaming end…that this is a band that is capable of some extraordinary things still yet to come.

For now, we have this incredible effort For All You Listeners Out There…an album that really shows age means absolutely nothing if you put your heart and soul into everything you want to go after in life. This emotionally-charged and passionately-performed album certainly sets an immediate standard for independent music to rise to…perhaps some of those mainstreamers too…

Find out more at: https://www.facebook.com/lifein.atree

Tags: Album For All You Listeners Out There Life In A Tree sleepingbagstudios