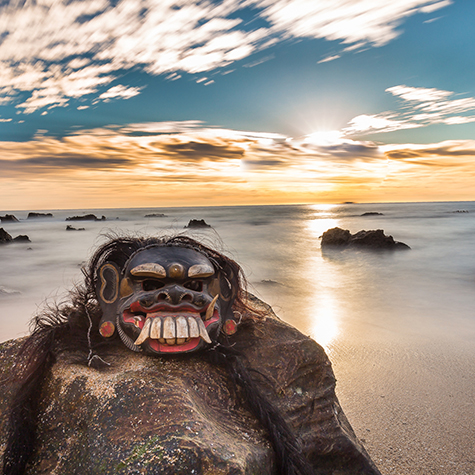 Heavy rock from Morocco (Pronounced MORE-ROCK-OH!) – Lazywall is back again with their powerfully punched-up sound supercharged & roaring on these songs from their latest record, The Hundredth Monkey.  Last time we checked them out…was actually around this time last year I believe…we had a chance to listen to a handful of singles…one of which (“Invincible”) goes on to make the final lineup of seventeen mammoth jams that make up the new album.  Everything I’ve got here today though…is all new to me…I’ve got four cuts from The Hundredth Monkey that we’ll get right into in review, right now.  I brought it up because I have the feeling, based on what I’ve now heard, that Lazywall didn’t feel the need to rely on including a whole bunch of songs from the past they knew already worked with the people out there when they could indeed, just write a whole bunch more and take it all even further.

Sure sounds like it to me – Lazywall comes out gunning, storming and stomping through the deadly pacing and explosive movements they make on “The Perfume” featuring the talents of Bashir Attar.  They sound BEASTLY as they slam into the beginning, hitting hard with Rage Against The Machine-esque inclinations through the behemoth guitar work from Youssef and thunderous beats from Monz as “The Perfume” begins.  Adding in the eastern-influence of Attar into the mix and melody shortly after, Lazywall lights this cut right the hell up as hard as they can…and I felt like you could instantly hear a further evolution to their approach and confidence surging like never before.  Vocally, lead-singer Nao continually attacks the mic with flavor, giving Lazywall part of their identifiable sound & style, never holding back and always driving the songs with the maximum gear he’s got.  Punching off the beat, mellowing out in the more melodic parts of the verse before Lazywall explodes into the inferno of the chorus, they get all kinds of crazy with the breakdown on “The Perfume” and I love it!  There’s no question that Lazywall brings a different dimension to the heavy-rock sound…this cut proves that.

I’ll say this…whomever it was that sent this package of songs out to sample the new record with knew what they were doing.  Usually, my experience is quite the opposite…I haven’t heard the rest of The Hundredth Monkey outside of these songs, so it’s hard to say 100% for sure if they got it completely ‘right’ as to what the best songs would be to pull us in…but I can certainly vouch for all four of these songs making me want to check out the rest.  They really sound like they’ve challenged themselves this time around…and their succeeding wildly in severe and savage conditions that quickly begin to morph and change with “Desert Flood.”  I think they’ve done an exceptional job creating a verse that’s got an insane amount of accessibility and catchiness to it…and that chorus…I’ll be damned if it didn’t just get cooler and cooler to me every single time I heard it.  No lie…Nao’s tones are somewhat bizarre and strange to get used to – at FIRST – but seriously, you give this band a chance and I bet you’ll be as hooked on their energy as I am.  That tangible uniqueness to Nao’s vocals ends up becoming such an incredible asset upon repeat listens and is sure to be one of the main reasons people continually come back to check out what Lazywall is up to next.  The whole band is kicking ass though…you really can’t take any points off these performances.  LOVE the breakdown before the final minute of “Desert Flood” – and I felt like overall, Lazywell created something really rad that’s a complete sum of hypnotic, psychedelic, rock, grooves and bold melodic parts all combined…it’s a seriously wicked listen.

Where things are going to get realllllllllllllly interstesting for Lazywall, is in the decisions they’ll have to make as a band coming up in their future.  From my own experience in listening, Lazywall has always rocked – and rocked hard…so what happens when you hear a track like “Time Girl” and things work out so incredibly well in a completely lighter style?  They HAVE to acknowledge just how well this song comes out – it’s a seriously single-worthy tune and so relentlessly catchy it could snag the whole planet.  It almost comes out with a Chili-Peppers-esque style of guitar tone & chords to start it up, then “Time Girl” shifts into something new that’s all their own.  Some of the best vocals from Nao exist here on this tune, also between the band as they lighten-up the mood in the music and lend a hand with the harmonies.  Honestly…it’s impressive to hear them succeed so strongly in such a different environment than we’d typically expect to find them in.  That CHORUS…is LOADED with goodness…and again, I think the more you listen to “Time Girl,” the more you love it…those are completely memorable hooks and this entire melody is truly noteworthy.  Subtle but gorgeous little guitar solo in there…complex and stunning guitar lines that sound completely effortless…and Lazywall pumps that extra energy into the chorus perfectly before letting it drift out into like…chorus part TWO, dripping with the pop-inclinations and sing-along factor that the people are guaranteed to love.  Of the four tracks here, without question, “Time Girl” is the most universally accessible song with the most widespread appeal & hit potential.  Like I was saying…it’ll be interesting to see how much a successful departure like this will influence their sound in the future to follow.

In a blend of both-worlds…”Brother” is still somewhat lighter-rock, but furiously played and performed with real intensity by all.  As far as accessibility in the hooks go, it’s much more like a complete adventure that’s laid out like a great story rather than something looking to be defined by its verse and chorus…something about “Brother” really just felt like one solid moment in time.  I think that’s Younes Fakhar opening up the track on the Oud…though I’m not entirely sure…it’s a highly unique instrument but definitely a factor in what gives the tone, mood and character in Lazywall’s music such depth.  “Brother” feels and sounds like a really open & personal song, diving deep into more emotional terrain and unafraid to expose both the light & dark within the situation and imagery described in the lyrics.  I really dig the structure, love the bass-lines and how they come alive in this song…loved the keyboards that come in towards the last two-minutes as the progression of “Brother” continues to twist and turn.  Smart harmonics in the final breakdown that ends the song in the spread-out atmosphere in which it all began, coming around full-circle in the music…and I suppose, at least in this particular setting of an album-sampler, makes a perfect moment to end it all on and really leave us wanting more.  I know I did – and like I said, there IS plenty more on The Hundredth Monkey…thirteen more songs on the official record for seventeen in total.  And if this sample is any indication of how that all came out – that’s going to be one seriously wild ride worth taking.

Find out more about Lazywall at their official page at:  http://www.lazywall.com/