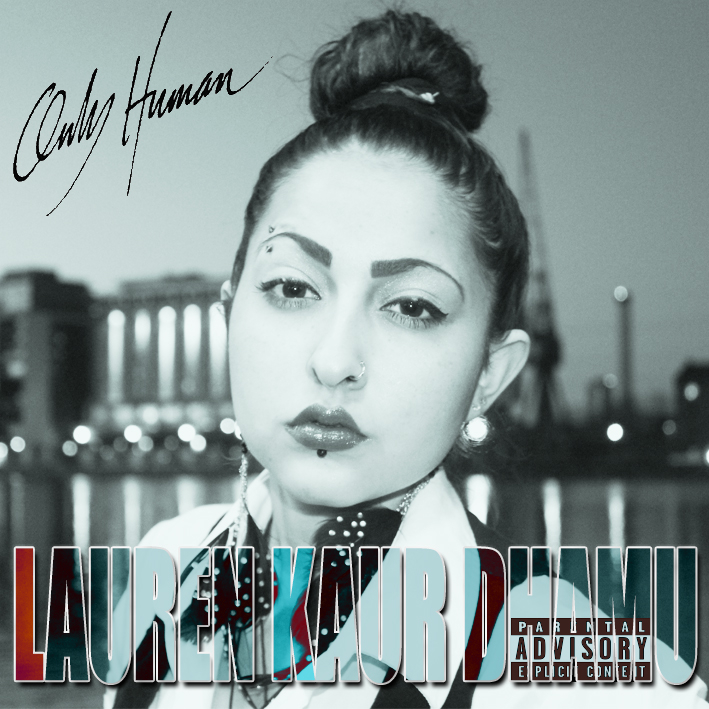 Let me tell ya all about what I wasn’t expecting to hear when I pushed play on Lauren Kaur Dhamu’s latest EP, it was the male-vocal sample that starts out the beginning of the title-track “Only Human.” At the time of, all I had to go on was the beautiful picture of Lauren staring back at me from the EP’s cover…hearing a man start this out just wasn’t what I had expected. But that’ll learn me…I’m not supposed to be expecting ANYTHING…I’m supposed to be sitting back and letting these sounds come at me as they are without any pre-conceived notions.

There’s a ton of sounds mixed in and coming at you quickly in this opening track. I suppose it’s danceable…if you don’t mind getting your robot-on. Much in the style of something that you’d hear from the popular giants of the genre right now like Iggy Azalea, it’s a complex beat that breaks way for the verse from Lauren Kaur Dhamu. She’s got a voice I love; just after a minute-and-a-half she really brings out the personality in the song with a wicked hint of attitude in her voice and the confidence of ten entertainers combined. With a UK accent coming through that fits the song perfectly…this beat grows so quickly on you it’s not even remotely a joke. I’ll admit…I thought it was late when I first started listening…like maybe I had past my proverbial bedtime…but upon repeat listens I found this is the exact song that keeps me awake and wanting to write a novel about just how inventive, innovative and creative this first cut from the EP really is. It’s a great start for Lauren Kaur Dhamu…blue skies ahead so far for the sounds on Only Human.

In a genuine bid to make me personally feel terrifically and irreversibly OLD…she launches into the following track “Kama;” which, I suppose I know now…is a slang-term for ‘karma.’ Or at the very least lyrically that’s what the song suggests. I think the opening verse is about the least confident you’ll hear Lauren sound at any point on the album…it quickly goes upwards towards the chorus. Always been a big fan of the UK rap & hip-hop style and there’s a great verse in this song around the second minute; there was a feature verse in the opening track as well…this one just hit home for me a little bit more in “Kama.” Lauren is smooth as silk throughout the chorus…it’s a slow-grind of a song but it works well with the themes in the lyrics.

“Nobodies Business,” starts out with the greatest…I don’t know what you want to call it three-songs in…maybe re-introduction of Lauren Kaur Dhamu? It’s awesome, playful and light-hearted…it’s a complete invitation to listen to this next complex beat. Excellent musical switch into a rap-verse that’s far too good on this particular cut; you’ve gotta listen to the words to really get how good this one truly is…there’s ummm…lots going on to say the least. Lauren is sweet driving the chorus around the music, great tones and a great hook that really do allow you a clear listen in to the specifics of all she does with her voice; she sings with complexity and skill. Especially throughout the verse of “Nobody’s Business;” you can hear audibly just how hard Lauren is going after it on the mic. It’s a clean, clear sound with great tone and audible-attitude, great music to go with it that pulses, bounces & clicks away with electro-mayhem from start to finish.

The final cut on this EP, “Sovereign,” puts out a much-more dreamlike quality through Lauren’s vocals in a very stripped-down club-beat that lives a very different life than the rest of these three tunes. This final tune almost feels like it’s done freestyle…or an afterthought somehow. It’s a lot more spread out sonically than the other tunes; an up-tempo but subtle electro-groove pulses out while Lauren does her beautiful thing over-top. It sounds good, no complaints production-wise here on this or any of the songs on Only Human…it’s a good job throughout; but in comparison perhaps to the other slowed-down tune “Kama” I think this last track sounds a little less focused overall. It serves a more trance-like purpose of course…one that lets Lauren and her music fade away right before it finds a new bounce in its step towards the fourth minute in; the beat rises up alongside her voice and provides a bit of energy as it speeds up towards the end. With a quick rap-verse repeated to end off the final bars…”Sovereign” was an interesting inclusion on this EP; this is definitely a lady with exceptional skill and I’m not so convinced that something like “Sovereign” might make the cut for a future album from Lauren…I think she’s got more to give than perhaps we hear on this final tune.

But with that being said…she’s provided us with an excellent time here with some really great ideas presented throughout the Only Human EP and definitely proven she has every right to be in front of a microphone. I think as time goes on this is absolutely an artist I can hear will simply get stronger and stronger, write hooks stuffed with even more addictive-qualities than they already are now and really deliver the power & confidence she in her vocals as she continues to rise up the charts. There’s a high-level of innovation here for the dance-genre and Lauren Kaur Dhamu definitely takes on a range of styles that make for a pretty damn versatile listening experience within four sweet electro-infused songs on Only Human.

You can get the brand-new 2015-release, Only Human EP from Lauren Kaur Dhamu right here from itunes: https://itunes.apple.com/gb/album/only-human-ep/id968235875