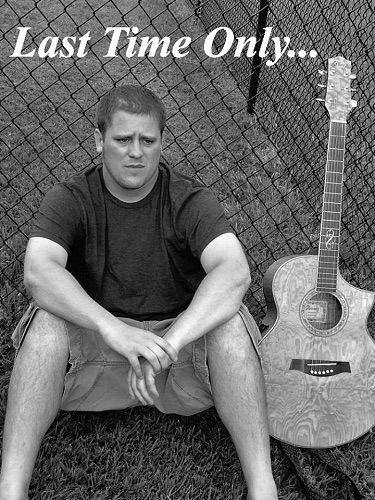 Sweet acoustic rhythms collected over the past several years by solo artist Jared Woodruff, who goes by Last Time Only in releasing his music. Technically around since the turn of the millennium, his music has that post-90’s emotional sound…pure acoustic entertainment that still retains the sentiment of the grunge era but was making its way to the mainstream through its clear pop-infusion. Like how bands like Dashboard Confessional and the Goo Goo Dolls reigned supreme for a while with their melodic-rock, Last Time Only has created infectiously genuine rhythms that capture both the heart & mind.

It starts out with pretty acoustic guitar plucked gently to supply the backbone for the vocal melody over top. Jared sings sweetly and clearly alongside the beautiful guitar in this low-key opening tune that largely depends on his vocals just as much as the music itself. He carries it confidently and delivers strongly & sincerely; it’s a melancholy opener but it also immediately turns off the rest of the world and allows you to hear a pin drop…it’s that kind of scenario in the opener…”The Things We Tell Ourselves” might be a tiny little intro somewhat; but the impact is huge through the way this has all been recorded.

One of my favourite rhythms and melodies comes early on into the album with the following cut, “South Jersey Romance.” This song is literally one big beautiful blend of everything that makes ‘indie’ music great; the emotion of the music matches the lyrics and the delivery perfectly. I absolutely love the guitar in this song, but it’s once again up to Woodruff to put out a strong enough vocal performance to truly carry the song – and “South Jersey Romance” becomes a very memorable recording quickly. The guitar coming out of the chorus is just incredible…it’s so awesomely emotional that it really acts as an echo to the sentiment of Woodruff’s words…and he plays it that way purposely I believe. Like a call & response of sorts between vocals and instruments – everything comes together perfectly in “South Jersey Romance.”

“Until I See You Again” almost starts out with that classic chord-strum of the massive-hit “Name” by the Goo Goo Dolls…but then when Woodruff adds his vocals takes a turn closer to something like a ballad from Blink 182 or Third Eye Blind. Very well constructed chorus on this song; they all have been – at this point this is simply more confirmation of Last Time Only’s ability to captivate through authentically displayed emotions at the front & center of the music. “Until I See You Again” is like the opened-vein of acoustic-rock songs…it’s as raw and exposed, real and bleeding as a song can be. The added emphasis and passion to his vocals at the end of this song seal the deal entirely – fantastically committed performance here and it came out perfectly on record.

Wasn’t a massive fan of “You’re The One I Want To Listen To Beautiful Music With,” at first…but it did manage to grow on me somewhat. The verse itself was something I feel like we hear many times in acoustic music and maybe not quite different enough to really help Last Time Only stand out like he has been. That being said, the chorus itself is certainly catchy and did a lot to pull me back in when my ears were trying to leave. The end becomes a blazing trade-off of vocals from Woodruff who playfully takes this song a-cappella to its final ending in an inspired idea come to life in the last moments of this cut.

The downtrodden melody of “Will She Ever Know” is another perfect match for the lyrics and sentiment in song from Last Time Only; and another bright chorus that sounds like tones filled with hope, potential and possibility. With many of these songs just being put out now after being locked in the vault for years…”Will She Ever Know” makes you kind of wonder why Woodruff isn’t spending a hell of a lot more time in the recording booth…he captures emotion in atmosphere in some truly amazing, entertaining and captivating ways. Yet another melodically-strong chorus on this second to last tune…it would seem that Jared can’t really miss more or less…unless there are another hundred songs in the vault recorded that we DON’T get to hear! 😉

Ending with a similar energy in “Past Mistakes,” this song combines elements of everything that has been going right for Last Time Only all throughout this EP in one last blast of acoustic that bursts brightly at the end with well-played & smart ideas on guitar and one of the most upfront & emotionally passionate performances on the vocals from Woodruff. Leaving the listener with the impression that these songs are coming from a real place of heart & honesty…there’s an authenticity in Jared that I really think shines through on his new EP Past+Present=No Future.

Let’s hope he doesn’t take another extended vacation and keeps on supplying great music like this throughout the years to come.