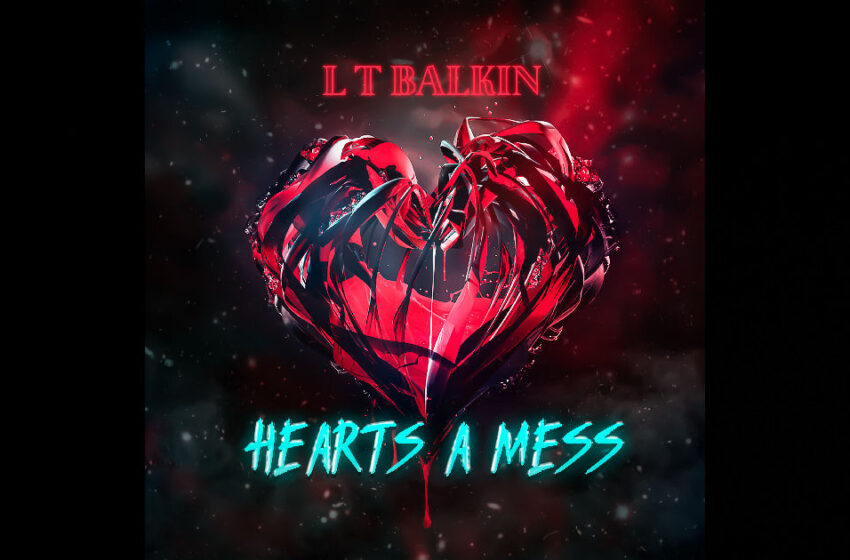 Back in February earlier this year, it certainly wasn’t lost on me that L T Balkin was rapidly surging into something genuinely special, and a real breakthrough year in his music.  For real y’all – if you haven’t checked out his last record called 7 Years Too Late, you’ve been missing out and you owe yourself a slap or two…but there’s still plenty of time to catch up, and L T’s already proven he’s not too late after all.  In my own personal experience in listening to that record, I felt like I could hear the inspiration running deep…and while I suspected Balkin would be back pretty quick soon enough, I gotta say, this new single came quicker than I thought, which pretty much confirmed my assumptions – this guy has the juice right now and he’s ready to make this moment seriously count.  The results have been more than exceptional already, and I was stoked to see that L T’s back on my playlist with another single-worthy cut to listen to.

Sometimes it takes a minute to figure out where the tie-ins exist within our music-scene…but just like there are only six degrees of separation between us all, those connections often exist.  I don’t usually question or dig too deep into how artists & bands out there find these pages of ours, but I’ll admit, I’m quite often curious when a new name does pop up.  You see that guest-star up top there?  That might very well be the key to this whole puzzle here and how we got turned onto the music of L T Balkin in the first place – we actually featured Alison Newman’s incredible voice on the SBS Podcast back in 2019 and hopefully introduced some of you out there to the music she makes when we played her single called “Here With Us Tonight.”  And now…now you’re telling me that these two amazing Aussies have joined forces for a brand-new tune?  C’mon folks…I might not be the brightest crayon in the box, but this is about as great of a recipe for the ingredients to a sensational collaboration as you’re ever bound to find; if you’re familiar with these talents, you can imagine how well suited they would be in working together.  These are two verifiable all-stars at the forefront of the independent scene over there in Australia, and by now I can only hope you’ve been paying attention to’em!  But if not…like I said, no worries – you’ve got plenty of time to catch up & this collaboration they’ve got will ensure that you really wanna do that – plus, they’ve got Nyukyung along with’em to bring his skills to the mic, which we last heard on “Free Your Mind” from L T’s album 7 Years Too Late.

“Hearts A Mess” is a flawless cut, that’s just the facts Jack…there’s really no other way to hear what’s being laid down here from the mic to the music.  I got so wrapped up in the version that I’m playing on the SBS Podcast tomorrow, that it honestly took me forever to realize this cut had a “V2” next to it, which admittedly, sent me scrambling over to L T Balkin’s page to see what I was missing out on, which of course, revealed the original version.  Truthfully, while a person can often get quite attached to the first mix of a song that they listen to no matter who the artist or band is, I felt like “Hearts A Mess” in both of its forms possessed strengths that had no problem at all rivaling each other in equal balance.  As in, I really didn’t end up with too much of a preference at all – it’s an awesome song, no matter which way you hear it…like I said – facts – not just a mere opinion.  From Nyukyung’s insightful lyricism & grip on the m-i-c, to Balkin’s impeccable DJ skills on the decks, & the stellar production of his overall sound, to the brilliantly bold, graceful, and enchanting vocals of Alison Newman providing the hooks – “Hearts A Mess” comes out gripping from start to finish as a result of performances everyone can be proud of.

In its original form, L T’s new single flexes a crisp beat and keeps the mix straightforward, dynamic, and crystal clear – and on “Hearts A Mess (Hi5 Remix)” their collaborative cut takes on a more cinematic flavor to it, with the additional strings heightening the background melody.  The bars are as solid as ever – Nyukyung’s got a genuine gift for spittin’ his thoughts, feelings, and emotions in ways that stick to us hard…as he details the complexities of life throughout his rhymes, you can always tell by the tone of his voice that he feels every word he’s written & rappin’ for ya as he continues to navigate his way from the bottom to the top.  The unbreakable spirit in Balkin’s music is undeniable, and it’s absolutely one of my favorite things about him AND this single right here – he’s just such a refuse-to-lose kinda guy, and that kind of true grit & determination combined with the talent he’s got is a verifiable force to be reckoned with.  He holds nothing back when it comes time to push record, and that makes the entire difference.  You can hear how Balkin has emancipated himself through his music and become the artist he was truly meant to be – it’s not even arguable – this is what it sounds like when determination meets opportunity.

As far as Alison Newman is concerned, WELCOME HOME m’lady – it’s been far too long since we’ve last had her up on our pages here at our site, and what a fantastic reminder of how spellbinding her vocals truly are!  Singing with swagger & style, Alison combines the sleek & the sensory as one as she glides into the main hooks of “Hearts A Mess” & brings an exquisitely classic vibe of her own to their new song.  It took a while for me to recall who it is she seemed to remind me of…and mind you, it’s just a hint here & there…most of the time I hear Alison & Alison alone – but there are significant moments where she would also sound similar to the remarkable beauty of singer Roberta Carter-Harrison of the Canadian band known as Wild Strawberries.  That’s aces in my books…Carter-Harrison would easily be right up there on my list of underrated & underappreciated voices from the mid-90s, and a comparison drawn to her vibrantly stylistic & understated jazzy vocal-style is definitely A-OK with me folks, that I can tell ya.  Newman delivers with spot-on professionalism and puts her heart into connecting with the emotional tone & vision L T Balkin had for the design of this single & the resounding results prove they’ve nailed it.

Find out more about the man, the myth, the legend – L T Balkin, from his official page at Instagram here:  https://www.instagram.com/l_t_balkin_music – and be sure to tune in tomorrow to the SBS Podcast when we spin the Hi5 Remix of his new single “Hearts A Mess” featuring Nyukyung and Alison Newman!