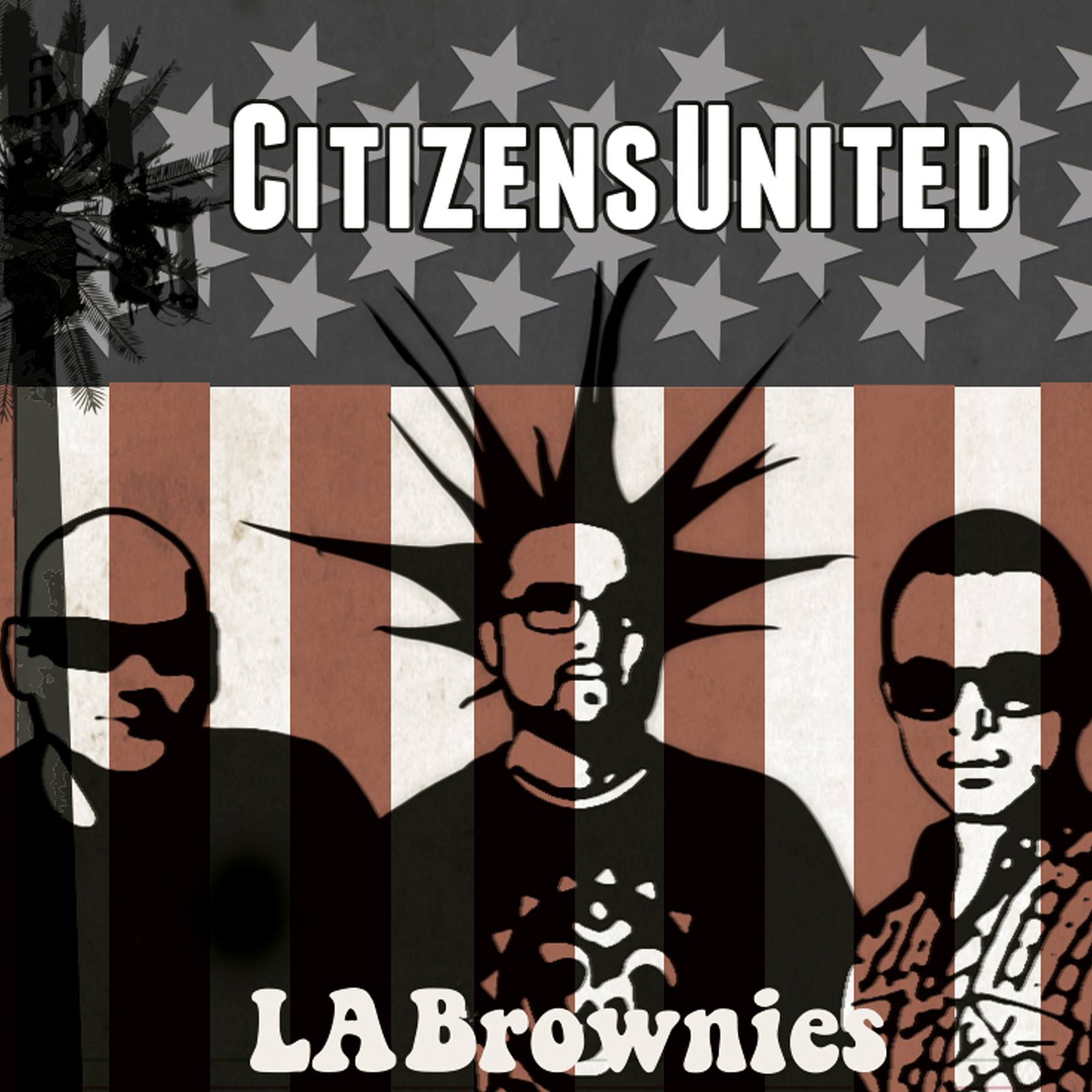 Let’s keep this party going shall we? Been reviewing music all day long, and these guys are making for the perfect cap on a great day here at sleepingbagstudios. And I’ll be sampling a great deal from these guys as we review this double-album-debut with the other half of the album-set coming up right after this when we review #Deuce from L.A. Brownies…keep an eye and an ear out as this three pieces brings an electrifying funk & good time to the table, and here to us at SBS.

How serious do we take it? That’s the question I kept asking myself. At times, this is like Rage Against The Machine LIGHT, done in a funk/reggae kind of vibe…at others, it’s got a completely sly sense of humour that pulses just underneath. Much like their funk brethren in the Red Hot Chili Peppers, that humour becomes as welcome of an element to the music as does the high level of social awareness that runs throughout this album, Citizens United.

“Where You At?” starts this all jumping with a simple, slow-funk groove that can’t be denied. It sounds like the beginning of a Friday night party and includes a bass-line that Flea himself would funk right out to. The vocals, and song really, all feel incredibly loose and relaxed…the L.A. Brownies sound at home – and they’re inviting you to come out to their place to party.

The explosive energetic rock within “She’s So Cool,” is contagious. Completely groovy, the guitars in this track are incredible in their tone and sound. Crunchy as hell, the distortion is perfect. Once again echoing sentiments of the Chili’s, this time from the older end of their catalog but more aggressive and nearly punk-funked…this track serves to get the energy up in the album right away.

My CONCERN would be…is “She’s So Cool” the right way to start this out when you’ve got more to say coming up just down the road? As the album progresses…it makes more sense and all becomes much more clear…the L.A. Brownies are only able to stay serious for so long before they jump back into humour, and the same goes for the opposite. Do I personally want them to be one way or the other? KINDA. But I don’t NEED them to be; this is what works for them. But when trying to communicate the serious issues that come into “Citizens United” or “Rise Up,” it does make me consider how all this is laid out in terms of getting their information and messages to us in an effective way. It’s a little tougher to take it all in amongst the humorous elements…but the music is often playful like that, so they’ve gotta lighten it up every once in a while right?

“Say What?” is a funk spectacle. The bassist/vocalist Krishna Katukota is such a necessary element to this brand of music, and thankfully this guy boasts all the incredible skills to pull off exciting funk. When combined with the perfect guitar work from Daniel Hernandez – check out his solo on “Say What?” – and the precision drums from Mike Delgado and you’ve got yourself a winning recipe for something that cooks with full flavour.

A track like “It Is What It Is,” comes on…and I’ve finally got it! I know where I know this sound from…these guys are the reincarnated version of the Fun Lovin’ Criminals! I mean, I’m assuming those guys died right? Or did they just vanish? Their issue could definitely be something for these L.A. Brownies to consider; the Fun Lovin Criminals died certainly crawling on their way to their next punchline…and without a ‘gimmick’ they began to flounder and fail, until they died. Or put themselves on a milk-carton…whatever. But when I hear a band as clearly talented as the L.A. Brownies ARE…it concerns me when I’m hearing elements that lead me to believe that they’re also searching for that gimmick in music to get them by. This method DID get the Fun Lovin Criminals to the next level…and more space in between themselves and the ground when they jumped to hang themselves. I think there’s a necessary aspect of the lyricism of L.A. Brownies…and I guess I just think it would be wasted on them not truly exploring that in search of a prop to hold up their tunes. “Dodger Blues,” would roughly land in that same category…there’s clearly enough skill and creativity here, and as much as they bring to this standard blues-rock riff…that’s still all it is by the end…somewhat standard.

Give me something like “Soon.” That’s a track with an interesting and innovative flow & beat…all unique to L.A. Brownies. RAISE YOUR HAND IF YOU’RE FEELING ME NOW?….says the smart-assed music-reviewer…

To me it’s a clear winner…a track like this is truly L.A. Brownies at their inventive best. A clever combination of rap/funk/rock – this song works massively well through the incredible bass tones and extremely wicked vocals that lead the way to this excellent, unique sound. A serious highlight, and right near the end of the album…gives this album a real memorable moment here towards the final cut.

“Don’t Sleep” has a lot that I love…great guitars right down to the scratching of the strings. For the first time as well, even though it’s only one vocal line in the verse, the L.A. Brownies bring a real element of melody into the music as well, which works so well you’ll wonder why they stay trapped in the isolation of the more monotone Fun-Lovin-ish rap tones. That being said, this track doesn’t contain those as much anyway…I’m actually a huge fan of the main lyrical hook here and the way it all sounds. The atmosphere in the background…is what truly makes this the final cut you want on an album like this; with its swirling dreamlike atmosphere, this final cut captivates and ends it all with a well-played stop-start groove.

I think there’s a lot for this band to give…if I sound hard on them at all, it’s only because I hear some real leadership potential here. The messages in “Don’t Sleep” are a perfect indication of that… They’re at the very least doing SOMETHING…this is far from a silenced opinion here, they are out there to help educate the masses to some extent…and with a little more focus, there’s a great chance that they’ll be able to communicate all their shared ideals with an even larger audience.

I’m stoked to be able to check out #Deuce right away and see what the funk is up with that album! Check back in soon to the homepage to see what the follow up thoughts are on this talented band.