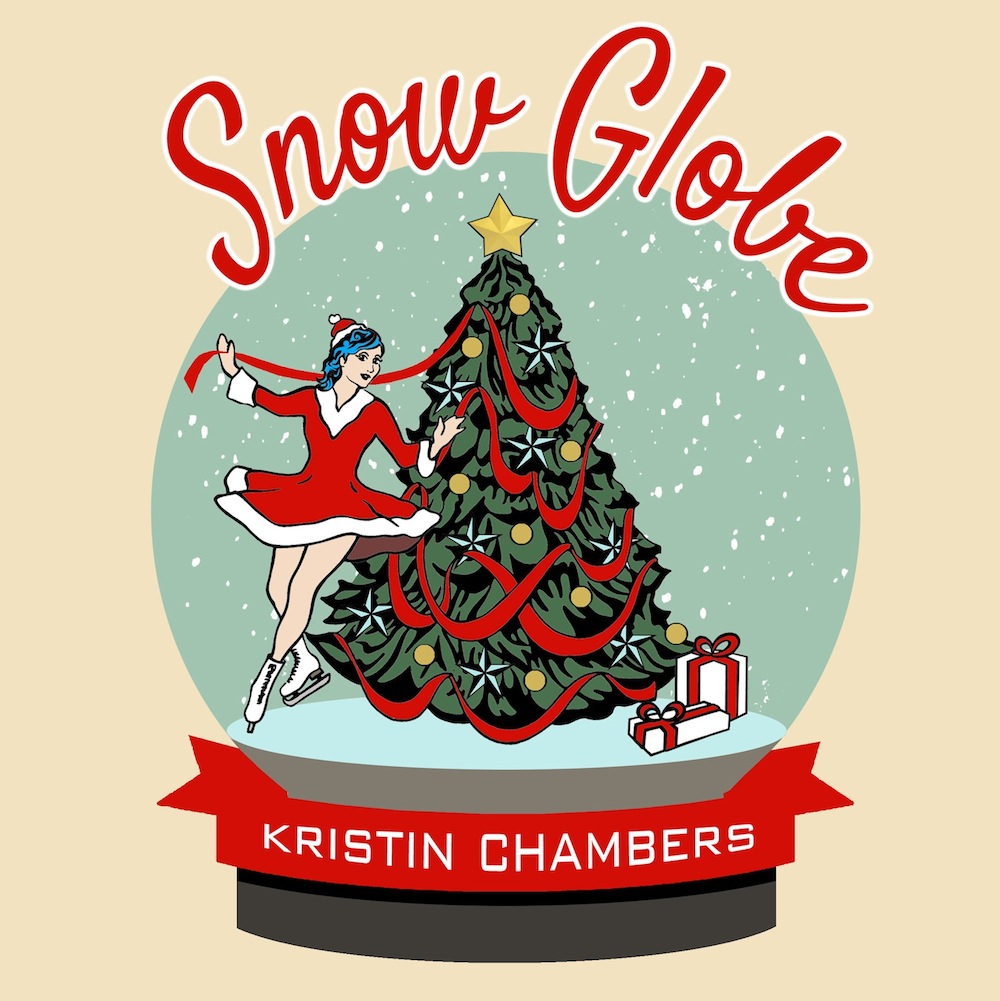 Thankfully…I know this is an artist we can rely on to deliver the goods – I just wasn’t expecting them pre-Halloween, or the rest of the Christmas-music that has already come our way this year for that matter. But I’ll save her the re-posting of the generic Xmas-music review that I wrote specially for the last one we did here in October with the intention of using each and every time this year for all the holiday music to come; with there being nothing generic whatsoever about the sweet & beautiful tones of Kristin’s voice…well…just doesn’t seem fair to ever lump her in with ‘the rest,’ ever. She impressed us greatly last time we reviewed her music from her album Everything Woman…but that was outside of the holiday-season…& now Kristin, here in October with your Christmas-tunes…you’re on the Grinch’s turf!

What I can tell you that I immediately liked about the potential of Snow Globe was that I recognized very few of the tunes by name. Those that I did recognize by their title…were admittedly some of my ‘favorite’ Christmas songs…you know, like…if I was forced to choose some in order to get presents…that kinda thing. There’s a solid mix of classic-covers and new original songs; and of course, as it played through Snow Globe, of course you start to hear the familiarity of songs you know by heart if not by name…and within the first sweet tune to start out Kristin’s new album…this Grinch’s heart began towards its 3x-expansion, just like in the fable.

Take the opening song, “Christmas Eve” for example…this is one I didn’t know by name – it’s an original from Kristin and what an incredibly beautiful opening it makes for this album! I’m honestly not quite sure of what it is that creates the music entirely…sounds like a gentle-guitar and perhaps something similar to like a synth-xylophone…but whatever it is…this is an astoundingly-gorgeous opening. If I had to hazard a guess at what the ‘true sound’ of Christmas would be…honestly, “Christmas Eve” has that magic; right now this is one of the few Xmas songs that I feel like I’ve ever wanted to hear on endless repeat – Kristin is already putting out one of her best performances that I’ve personally heard right here on track ONE.

Of course…where we all have our favourite Christmas songs…we also have the ones that we don’t look forward to – not much can be done about that aside from delivering the best of what you can do with it, which Kristin does for me on “The Little Drummer Boy.” First and foremost – it’s not her fault that I am 35-years-of-done with this particular song…believe me when I say she’s not the straw that broke the camel’s back on his way to Bethlehem. That being said…for a song I haven’t enjoyed in YEARS…Kristin actually HAS found a way for me to enjoy this Christmas-standard with an absolutely hypnotic rhythm and performance in the inspired-ending of “The Little Drummer Boy.” In a bizarre way…this tune almost has a lot in common with the slower-sounds in Psychedelic-Rock with the way it holds onto its groove at the end…”The Little Drummer Boy” was not a track I was assuming would get a pass from me, but I say onward Dancer, onward Prancer and the other lazier-ones in the back…we’re moving on, it’s all clear!

With a highlight-display of the sweetness in her voice that makes her sound & style as captivating to the ears as it truly is, “Last Christmas” delivers the holiday-spirit in full, bright & vibrant tones. Her take on the classic-tune is absolutely sparkling…and I think that this is the exact vibe that people are looking for on their Christmas-mornings around the tree with their family & loved-ones. Even though the jaded-attitude in the lyrics of the song do their best to hollow-out Kristin’s sweet-approach…they have no chance; she sounds spectacular here.

But for people like myself…I suppose those inward-pensive-thinker-types…Christmas is often a time of self-reflection and trying to wade through the commercials to what really matters in the holidays…and a song like “Home” is exactly what I’m personally looking for. From backup-vocals to her lead, Kristin puts on an audible-clinic of what beauty in song truly is. Angelic, innocent and with gorgeous-melody – I absolutely love what she’s done with this song…this wasn’t a Christmas song I was familiar with. Chambers really wraps an early-present for us all here on “Home” – this is exceptional by its very definition; a track that strikingly stands-out amongst the rest. Piano-led, solemn and featuring a perfectly-emotional performance from Kristin…”Home” was an absolute winner for me.

So much so, that it was a little tougher for me to get back into the more upbeat-vibe of Christmas-music as Kristin got into “It’s Not Christmas Without You Here.” Kind of a gentle, blues-rock-meets-R&B take on the tune…I’ve got no real complaints about its composition or the performances…it’s a bright & shiny-tune that’s extremely pleasant…I suppose it was just the jolt of switching from the isolated feeling of “Home” into the energy of “It’s Not Christmas Without You Here” and “A Magical Guy” and realizing that most Christmas music is about large-groups of people and opening-up & all that… Terrifying! “A Magical Guy” is certainly unique however…Kristin Chambers surrenders the microphone for this tune and Casey MacGill takes over to bring his signature-croon to the music. Definitely makes for an interesting departure from what you might have thought to expect coming next on Snow Globe…and you can certainly hear that MacGill is the authentic real-deal – he puts the recognizable ‘Christmassy-stuff’ into “A Magical Guy” as the violins lead the way with their stunning-tones and solos livening-up Santa’s workshop to get those Elves tappin’ those hammers to the beat. It’s no secret to employers that music being played in the office increases productivity…so if you get your presents on-time this year, just remember you have not just Santa, but more than likely MacGill and Chambers to thank for that as well.

“Silent Night” is a mixed-one for me…it really makes me appreciate just how ‘personal’ all Christmas-songs kind of are, in terms of how we like to hear them. I’d be hard-pressed to say that Chambers has turned “Silent Night” into a sunshiny day exactly…but the slightly brighter tone of this take on “Silent Night” took away a little of the melancholy-isolation I’ve always felt in this song. That being said, this also means she’s really opened-up this melody into a wider atmosphere of acceptance I think; she sings it with real grace and stunning-tone and does justice to the classic with a flawless performance once again…she’s really been amazing on this record and deserves a massive amount of credit for her work here.

It could be the ‘new-ness’ of the originals…but in my opinion, the magic of Snow Globe is really locked-in through the brilliance of her new songs. “Frozen Heart” is like…hmmm…what’s the word for beyond-gorgeous again? Exquisite! We’ll go with that…that works for me; that’s what “Frozen Heart” is. The piano melody is as chilling as a fresh snowfall…with just enough brightness to captivate like watching out the window as snowflakes fall through the lights on your street, descending towards the ground through the gentle breeze. The combination of violin/piano sounds perfect with Kristin’s sweetness…”Frozen Heart” will melt yours.

Here’s what I’ll say about a song like “Auld Lang Syne,” in general…before getting into this specific version on Snow Globe. I think it’s a song written so extraordinarily-well that it cannot possibly be screwed up; whether you weep through the song and barely get through it due to emotions or raise another glass and sing it in celebration – this song is one of the best ever to have been written with one of the world’s most timeless and cherished melodies. Kristin’s version is a solid-one…she almost puts a take on this tune akin to what Sheryl Crow might have done with it…and though it’s still a little more upbeat than I might prefer my “Auld Lang Syne” to be…I can’t deny that it’s another golden performance from Seattle’s own Kristin Chambers.

Ending on the piano, with a slow-tempo and jazzy version of “The Christmas Song,” I can’t help but feel like I certainly identified more strongly with the more melodic, isolated and darkly-sweet tunes on Snow Globe that were just like this one. “The Christmas Song” would absolutely be my favourite of her covered-classics on Snow Globe and really ends this album full-circle into the sweetness of where it began. The classics are bound to resonate with some and become a discussion point for others around the Christmas trees this year as we talk about what makes the holidays special for each of us – but there’s not a moment you can take away from the sparkling beauty Kristin has put onto this record at any given second or minute that ticks by. Her original tunes on Snow Globe are truly destined to become classic-tunes akin to the timeless-nature the covers on the album currently hold – she’s an amazing song-writer and a performer that fully brings the snow-filled magic of Christmas to this record; it’s a wonderful listening experience that even puts the Grinchiest-of Grinches in the mood for Xmas.