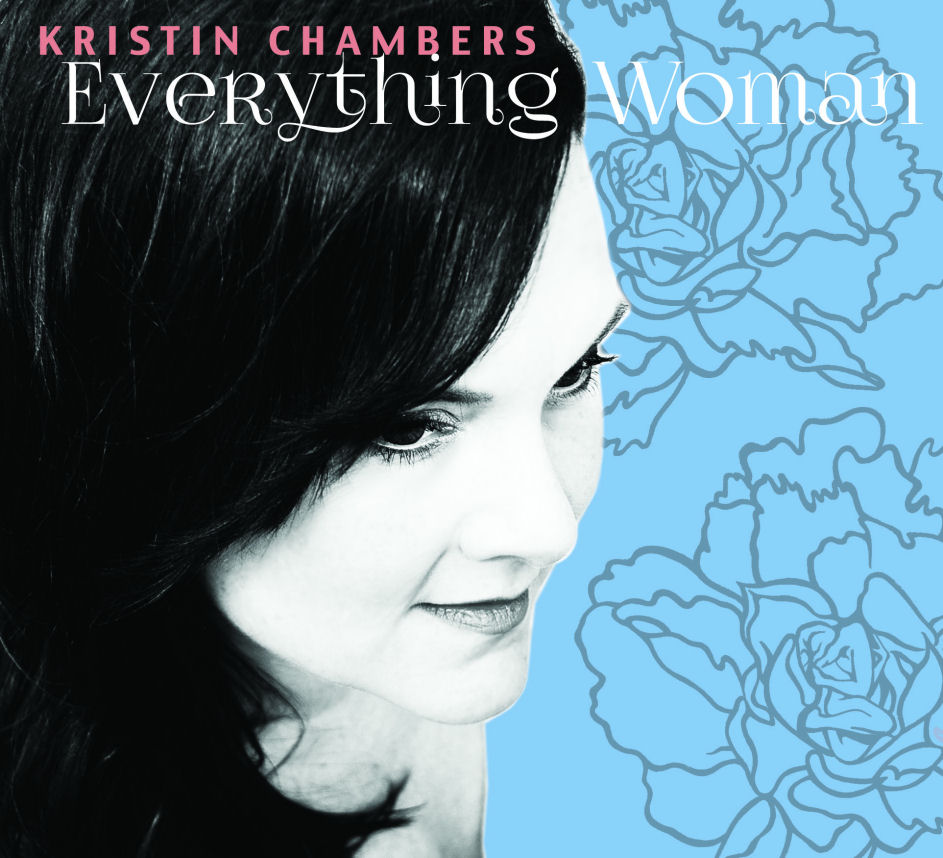 Everything Woman you say… Am I technically able to review this? I hope I’m not disqualified…I’ve decided to risk it anyway…I’m going to get out some nice candles and just sit here to review this from the sensitive feminine-side of myself. Figure as long as no burly Paul Bunyon-lumberjacks walk in here while I’m playing this new album from Kristin Chambers that I’m safe. No one can see me…and I’ve tucked my beard into my shirt just in case someone does. Maybe they won’t notice I’m a dude…

All B.S. aside, Kristin’s doing really well here on this album. Seattle has recently reclaimed her after years spent in New York; and though this is my own first time having a listen to her work & her music – I’d have to assume that perhaps she’s back and better than ever?

From the singer/song-writer aspect of it all, she lives up to the reputation I could find online with the excellent & harmonious opener of “Can’t Let Me Down.” It has an inspirational tone through both the music and through Kristin’s melodic vocals; the song itself actually sits right on the edge of country-music without going full into it…but there are definitely trace elements. Slipping into a more involved and more pop/rock style, Kristin quickly slips into something that would have just as easily made The Cardigans or Sheryl Crow ecstatic to have written themselves with the excellent “Eyes That Say I Love You.” The way she starts this track is excellent as well…she’d love our good friend Laura Kelsey; very similar vocal styles.

Game on Kristin. I’m ten times the woman you thought I’d be – I fit right in here!

What can I say? I’ve long declared what a fan of beautiful melodies I am on these pages. Listen to a track like “Before The Light Of Day” and how it starts, how it kicks in, and how it becomes smooth again; this kind of assembly and dynamics should be all the convincing that you need to know that Kristin understands the insides & outs of creating a big, big song. Just towards the third minute, this song reaches straight into the atmosphere with all its energy – enough to give the sun a full-body-planet-hug.

The title-track…”Everything Woman,” is a good song…it’s so low-key after the energy of “Before The Light Of Day” that it does drop the pulse of the music quite a bit by the tempo as Chambers delivers what becomes the centerpiece of her album. I’m a big fan of the horn section that comes along with “Everything Woman;” it’s a theatrical number and pretty dynamic for how slowly this track rolls along. Sometimes…as I’ve mentioned recently in reviews here…sometimes those epic pieces we write, our most personal songs can be the toughest to get right. I’m far from saying that Kristin got it wrong here – there’s just as much nothing wrong with “Everything Woman” as there isn’t with everything else….but…

…when “A Little Time” started up, I felt like this almost immediately outshined its predecessor. This quaint little isolated tune has a very sweet sound to it, it has a melodic-pulse that runs deep – and Chambers herself is at her very best right here on this song. Great subtle guitar work in these past couple tracks through the verse and again, just fantastic horns…trumpets…they come through sparkling on “A Little Time.”

Perhaps if anything…there are some really great tracks followed by some really good ones…the album as a whole includes nearly everything in the musical-kitchen sink, but it can often feel like cohesion is missing from track to track. I found I had a similar reaction to the following two songs where “One Less,” was more of a debatable inclusion to the album and “Bettering,” was an absolute must-include! Kristin gets more inventive, free & innovative on the latter and really moves through a powerful performance in one of the more diverse tunes you’ll hear on Everything Woman.

Both “I’m Yours,” and “Andrew” have aspects of that theatre-experience that Kristin has gained throughout her career on stage. “I’m Yours,” is sung sweetly with a ton of confidence and fantastic harmonies…stellar, bright melodies here on this song. She continues to make intelligent choices in song-writing and really plays to the strengths in her voice on “Andrew.” It bends a little towards the country-side in her tone of voice, but she pulls out solid tone and solid note on this song and throughout the album. That’s called confidence people…it’s something you can easily hear; Kristin believes in her abilities as a song-writer and she belts these out knowing she’s gonna hit the mark perfectly.

A song like “Guarantee” makes it truly sound like she was raised on the ‘ol’ family ranch deep out in the heart of Kentucky’; it has that old-timey, old-fashioned sound. “Wishful Thinking” is right where I’m at…that’s an absolutely fantastic melody-line from Kristin here. Audibly singing this one as sweetly as humanly possible, she shines a light on one of her brightest & most beautiful tones here. It’s the shortest song on the album by a mile…one that you’ll instantly wish was twice the length; it drips audio-sunshine and happy-faces and could easily calm a whole marine-corps-worth of nightmares away.

“A Thousand Skies” has an opening that reminds me of “Somewhere Only We Know” by Keane, but different enough by far to be completely and thoroughly Kristin Chambers. It’s got a great piano-line working with guitar, drums…and I think some synth-keys acting as a flute…maybe a flute itself…not sure…sounds good though! Kristin sounds similar to Kate Bush in this track, strings come in beautifully through the middle and until the end…this is just about the most beautiful ending to an album as you could ask for. If “A Thousand Skies” doesn’t convince you here at the end…there’s just no helping you.

With a completely gorgeous & memorable ending such as this…if the concept behind Everything Woman the album wasn’t so thoroughly strong…I’d have to imagine that this incredible final cut would have been the debatable title for this beautiful new set of songs. Everything Woman is definitely an excellent effort all the way through from Chambers and definitely a highlight candidate so far this year to be the album that fills up the soft-side of your speakers.

That, my friends…is one man’s opinion.

Find out more from her official page at: http://www.kristinchambers.com