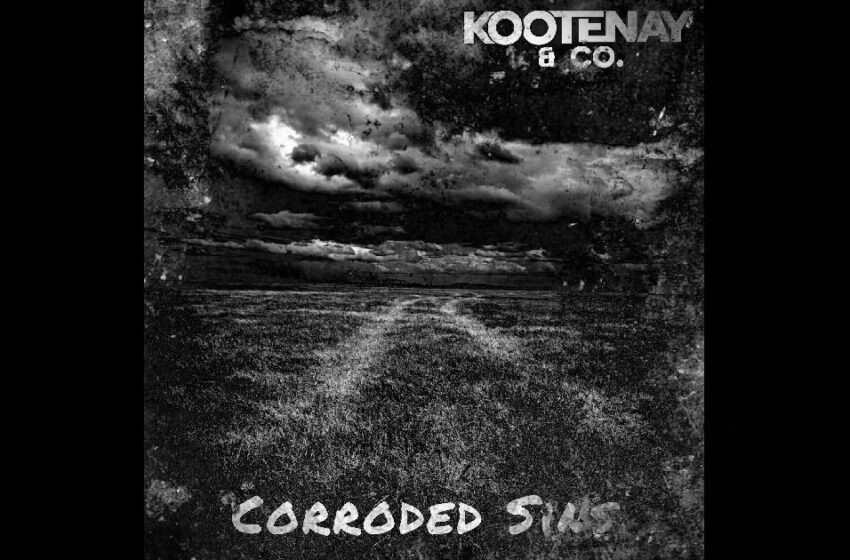 You know, when I first saw the title, I was convinced this cut would be on the Metal side of Kootenay & Co.’s sound right away.  Then I sat back and thought about it for a while…and really, I suppose it COULD have been one of their Country tunes too…I guess I associate the word “Corroded” a bit more with the Metal genre…”Sins” could go either way.  Anyhow…it won’t take ya more than a mere second to push play and know which side of the sonic fence this band has landed on this time around – we’ve got a wild & extreme hybrid of punishing Metal, Punk, and Hardcore rolled into one on this new single right here.

I know exactly how much effort they put into their music, given that I’ve interviewed the leader of this collaborative crew, Jordan Kootenay a couple of times…and I’m fully aware of his attention to the smallest of details.  So do I expect a quality tune when it comes to Kootenay & Co. – our Canadian brothers, from way over on the western side of the country?  Yes.  Yes in fact I do.  I try not to have any expectations of anyone really…ever – but there are some artists out there that you occasionally run into that are essentially synonymous with quality.  Doesn’t always mean I’m gonna like or love a song, but when it comes to the core fundamentals of production, performance, and tangible skills…that’s the kind of stuff we’re talking about – and Kootenay & Co. keeps their standards up in these departments to the nth degree – no issues there.  I’m not the world’s biggest Country fan and have never pretended to be – and when it comes to Metal, essentially the other side of the massive range of sound we know in genres – I’ve really only got a half a foot in that world too; I like some of it, but it’s not really my main diet, you dig?  Kootenay & Co. has consistently beaten the odds and had me listening, not because this is my job and what I do, but because the quality is always there – they’re reliable as fuck when it comes right down to it…and I maintain, I’ll listen to anything if you put authentic passion and serious effort into what you create, whether or not it’s something I’d normally choose to add to my playlist – sound-wise.  On this playlist over here, I keep an entire spectrum of high-quality cuts from all over the map in all kinds of different styles – because listening to music outside of what you normally would, is what helps you grow & understand the art & craft in new ways from different perspectives and unique points of view found on inside of each separate experience.  Kootenay & Co. has enriched my own life just by listening – truly.

As to whether or not everyone’s going to want to get screamed at so damn hard it’ll pull the skin from your FACE as you listen…that might be another story.  Let’s just say, vocally, sonically, and thematically – Kootenay & Co. are pulling absolutely zero punches here – and it’s three main assets, are likely to be its equal three disadvantages for the squeamish & punk-ass; we’re talkin’ about scorching Metal music, 100% ungodly vocals, and a powerful look at the history Canada has tried so very hard to keep buried for far too long.  And if you can’t HANDLE facing any of that shit – then move along; this ain’t gonna be for you.

“Corroded Sins” deals directly, brutally, openly, and honestly with the horrors surrounding indigenous Native Canadians being forced into residential schools run by Christian churches.  And here’s where the rubber meets the road folks – you might not WANT to be screamed at – but there IS a time TO scream and there are things worth screaming ABOUT – and this issue, is certainly one of them.  As an everyday average white guy, I am not going to even pretend I know half of all the truly grim details and horrors our Native brothers and sisters have experienced – but I am certainly aware of them – and I would only hope that the world has been paying attention to just how wronged their entire culture was by what this country allowed to happen to them.  This past couple years have been spent digging up countless unmarked graves…each one representing both a tragic life lost, and a stain that Canada will never be able to ever wash off.  As Kootenay & Co. will detail within “Corroded Sins” – “it all ended around ’97 / the truth remains the same.”  That’s verifiable history folks…and the sad state of affairs as they are still now – this whole issue is far from resolved, even now.  The last functioning residential school was officially closed in 1996 according to what I’ve read, with the final one running with residential history closed down the year after in 1997, putting an end to that particular chapter of one seriously long and horrific entry into Canadian history.  Think about that for a second though…especially if you’re reading this from outside of Canada right now – I claim to be older than dirt, but I’m not at all really – in this context on the timeline of things, I hadn’t even graduated high-school and this residential BULLSHIT and brutality was STILL going on.  So do I blame Kootenay & Co. for screaming on “Corroded Sins?”  Not one fucking bit – I support it – there’s almost no other way that these things can be said without screaming.  “Fuck the churches and their corroded sins” is every bit as pain-filled, powerful, and forceful as it’s intended to be – and after all our Native Canadians have endured, the least you can do is sit, and listen.

There’s a REASON that a song like this is screamed and not sung.  Several.  Several unmarked reasons.

Kootenay & Co. play “Corroded Sins” fueled with purpose, and fired-up passion in everything you hear.  From the roar of the vocals, to the scathing guitars and solos, to the beastly rumble & stomp of the rhythm section – “Corroded Sins” is unapologetically direct – because it shouldn’t NEED to apologize for single damn thing.  This is the sound of what reality IS – this single is a gripping reflection on both the past and the present combined, played with serious intention, and without question some of the best songwriting I’ve heard from Kootenay & Co. to-date.  It’s an important song, released at a crucial time, designed to shed much needed light on one of the darkest corners of Canadian history that can’t stay hidden any longer – nor should it be allowed to anymore; nor should it have ever been to begin with.

Find out more about Kootenay & Co. from this here multi-link:  https://linktr.ee/kootenayco_