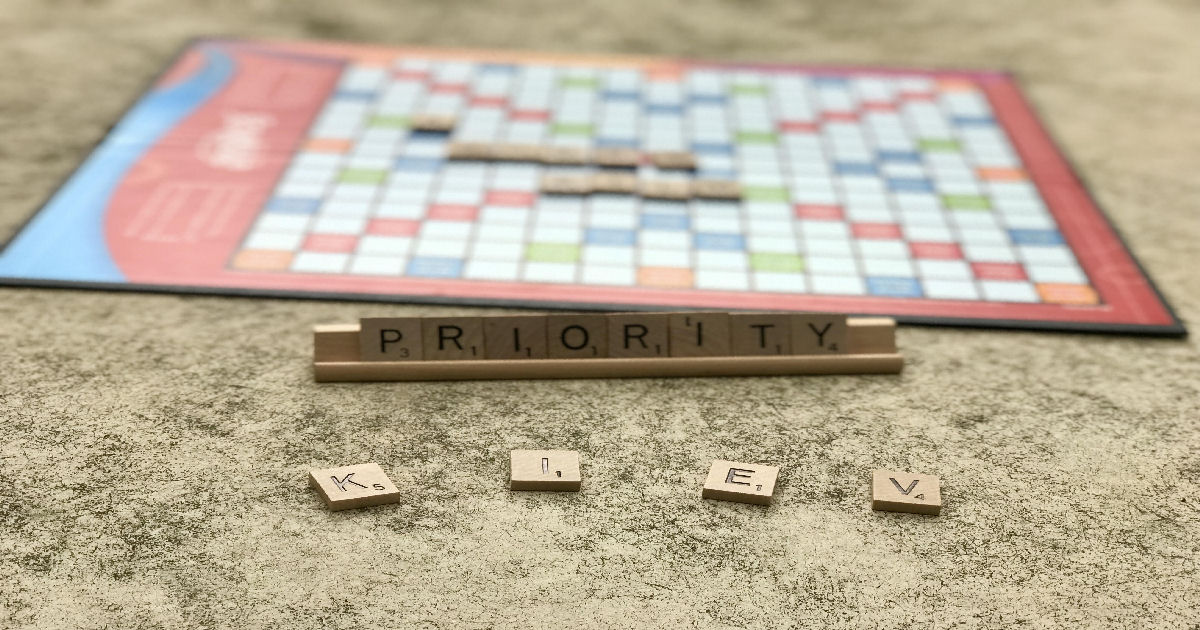 After a three-record year in 2017 including the Infinite Positivity EP and full-albums Swish & Half Man Half Amazing – these past nearly ten months have actually been the longest stretch without rapper Kiev’s music on our pages since we started listening.  Of course, the good news being that, we’re back right here & now to announce that the chef has been hard at work back in the kitchen y’all – he’s got a solid new set of cuts that sound real sharp coming through the speakers on his latest album, Priority.

Dude starts out this latest effort with a magnificently atmospheric sound on “Can You Tell Me” – and lyrically, Kiev comes out of the gate stronger than ever right from the drop as Priority begins.  Questioning the ways of the world and the current social climate…he makes multiple insightful points and observations…REAL talk…not just stylistically cool, but words that have REAL weight and meaning behind them.  THIS is how you set the table though homies – I wanna eat here.  “Can You Tell Me” is a perfect mix of intelligence and atmosphere at work in a subtle Hip-Hop groove that has a jazzy tint to the beat that works wonders.  It’s all about the words on this opening cut though – Kiev comes out completely crushing it with amazing insight and incredible flow to give life to the lyrics.  When the background vocals show up, you get another high-dose of magic injected into this vibe.  And that final verse from Kiev?  Straight-up award-worthy.  Listen to how he weaves and winds the words through these final bars and creates a massively innovative and highly skilled ending to “Can You Tell Me” – that’s 100% verbal badassery right there and a wild display of an emcee with serious capabilities.  Time after time spinning through this album, I continually came back to this track as one of my absolute favorites…I love the way the atmosphere works to support the thoughts being spit into the bars of this opening tune…”Can You Tell Me” is built on subtle strengths…and it’s absolutely bulletproof by the end.

“I know, y’all probably thinking I was just a Soundcloud rapper” – ayyyyy for the record, we’ve always been hearing ya here on this side of the screen Kiev.  “Aye Yo Rich” puts the man right in the spotlight – if “Can You Tell Me” eases you in gently to Priority, then a track like this thumps & bumps with bold social commentary & personal insight by comparison.  The longest cut on Kiev’s new record, “Aye Yo Rich” gets deep into politics and the mechanics of the machine that’s got us all working overtime; masterfully weaving thoughts together, asking questions, providing insight…I like that Kiev’s gone far beyond just creating a record full of great beats & genuinely putting his opinions & thoughts into these bars.  The hooks on this cut are beefy yo!  The bass-line grooves that run through the music and synth-sounds on the surface are a perfect combination and controlled with an expert hand.  Excellent imagery in the lyricism, decisive hooks that have that old-school mic-pass feel in the chorus in that call & answer style where each line plays off the energy of the one before it.  As far as knowledge bombs are concerned – you can duck & cover all you like, but if you’re listening to “Can You Tell Me” – you ARE gonna get hit with a few…and I can only hope that would be the case.  There’s a ton of valid points and important insight being laid down in the verses of this cut…and if even just 10% of it somehow got through to each person, believe me, this world would be one hell of a better – or at least more informed – place.  Either way it’d be a win, and I certainly appreciate the effort that’s being put in on the lyrical front – a track like “Aye Yo Rich” is designed for the people to hear…and I truly hope they do.

“Overdose” is all-out ILL.  To start with, I think that Kiev’s made a great choice in keeping this record short, to the point, full of highlight material and the lineup stocked with entertainment that never drops in quality or focus.  Priority is only seven cuts long – and spoiler alert, Kiev’s bringing his A-game all over the place.  “Overdose” is a fairly minimalist track at the end of the day, it’s the beat and the vocal-flow you’ll remember…and this cut makes sure that both come out sounding tighter-than-tight.  But it’s tracks like this where the emcee sets himself apart from the rest…a moment for Kiev to really shine a light on his flow and what makes it unique from the other rappers you’ll hear out there.  “Overdose” rests on his shoulders – and he rises to the occasion; there’s a hint of melody & low-end to provide some rhythm in the music to follow…but we’re talkin’ real minimal here – it’s really the bars & beats, meat & potatoes ingredients of what makes Hip-Hop timeless…and he nails this vibe as hard as possible.  That snare sound alone is worth the price of admission…but overall, it’s that’s combination of swagger & skill that really makes “Overdose” enticing to listen to at all times…Kiev’s in the zone right here.

Where personality makes even more of a difference is on a song like “Ballin’” – cause this one’s probably about as close to on the fence as I got when it came to the whole should/shouldn’t it be on this record thang.  It’s the character and style of the main man on the mic that ends up taking what could have been ordinary – even straight-up kinda WEIRD – and turns in a powerful performance that’ll change your opinion on the rest.  Because beat-wise…we are talking split hairs away from downright questioning why he would have pursued this particular cut until that swagger starts coming through the mic…and then magically, it fits.  I’m not gonna go screaming from the rooftops about the composition of the music on “Ballin’” – on that front, I really think this entire track is saved by the charisma you’ll find in the hazy vibe Kiev creates in his rhythm & flow.  I do have the feeling that this is likely the most John Stockton has ever been shouted out in a Hip-Hop or Rap track…which is…well…I mean, why not, the dude could ball.  It’s all about the verbal-skills on this track though…a real case of not just what’s being said, but how – it’s the stylistic performance that Kiev puts into “Ballin’” that makes it worth your time, no question.

“I’ma give’em hell but the music’s still heavenly.”  Kiev homie…I’m sure I’ve said it before bro, but you really come up with some killer lines.  I mean, I’ve quoted a few of them here in this review, but the facts are that his records always have TONS to listen to in that respect.  “That Work” is a badass track that details life as an artist and warns of the thieves lurking in the suits’n’ties that wanna come along to take advantage.  Can’t say I disagree with what he’s saying here…can’t say you’ll disagree either – the man is spittin’ out truth & facts that put a lot of hard realities on display for sure – but still, words that young artists out there could learn from.  He goes direct here – and it works brilliantly; he’s attacking labels, the education system, the traditional work-force…the importance of keeping your game sharp with your head on straight, and pursuing what’s really meant for you no matter the cost.  He doesn’t glamorize the life of an independent artist, he details the hardships and many of the situations that realistically come up along the way throughout “That Work” – he’s on-point here big time and pulling no punches.  It’s gritty, raw, & realistic…you gotta defend “That Work” of yours at all times & Kiev knows it.

When it comes to highlights on this album, “Highlights” is like a neon-sign arrow pointing to this particular track – and Kiev rips up the bars on this track like he’s a man possessed.  He’s given you plenty of versatility & style throughout this album, and then when it comes time for “Highlights” he takes his flow to the next-level by proving he’s got tempo in his arsenal just as much as complex emotions, thought-provoking rhymes, and strong lyricism under his belt.  He’s a well-rounded emcee – this whole record speaks to that on many levels…but between “Highlights” and “Family Close” and the widespread difference in their style/sound at the end of Priority, he really drives home what an asset that is to be.  Excellent music running through “Highlights” – it’s got like, that old-TV theme or late-night jazz in the background of the vibe…whatever you want to call it, I love hearing it and it sounds fantastic on this second to last cut.  Definitely hard to ignore The Chef cuttin’ it up in the kitchen though – Kiev lights up the mic on “Highlights” and really lets the flow rip at full speed with impressive results.  Probably one of the most balanced cuts between the supercharged charisma in the verse & memorable chorus hooks – “Highlights” is a track I’d definitely point to as a potential single from this record…widespread appeal on this cut for sure that I can imagine many people out there wanting in on.

Leaving us with a genuine Hip-Hop vibe to finish off the Priority experience, “Family Close” gives the record a smooth exit on positive messages.  Detailing the love & support around him – despite the fact that some of them owe him a few dollars – Kiev relates how important it is to keep the “Family Close.”  He keeps the verbal highlights coming fast & rhythmically, rolling with the flow on this final tune, keeping it short & sweet, wasting no time with gettin’ in everything he wants to say right at the end here.  Kiev’s made multiple insightful points across the distance of his latest record – but if you’re looking for the real…if you want the most revealing personal details on the man behind the music and what he’s REALLY all about – “Family Close” will supply that more than any other track.  He ain’t complaining here, he ain’t pointing out the flaws in our society – he’s dreaming out loud on this final cut and letting us in on the life he’s lookin’ to live one day.  Music is perfect on this last tune as well…hi-hats tickin’ along before the beat kicks-in…and you just can’t help but feel the uplifting energy in this final vibe…it’s comforting, inviting, and welcoming at all times…and while Kiev’s relating his own dreams, you’ll likely drift off into some of your own as you chill with “Family Close” gently rockin’ your system.

Priority is a really focused and tight record from Kiev…he always manages to put out something impressive to listen to and has since I started listening back at the beginning of last year, four records ago – but I felt like this album really kept the corners sharp and on-point at all times.  The attention to detail is perfect…I felt like Kiev has multiple highlights on the mic that shine a bright light on some of his best flows & bars to-date…and lyrically, this record felt like he made massive strides to embrace the platform he has and spit important truths, personal details, socially conscious messages, and undeniable facts of life that we can all relate to.  There are no signs of Kiev slowing down and continual moments where you realize he’s still getting better & better – no doubt he’s got some of his most killer material on Priority in his catalog so far and remains one of the emcees you can rely on for real entertainment.

Find the Priority record from Kiev at Spotify here:  https://open.spotify.com/artist/3gY4AXKmt61qPI1WwjonZn