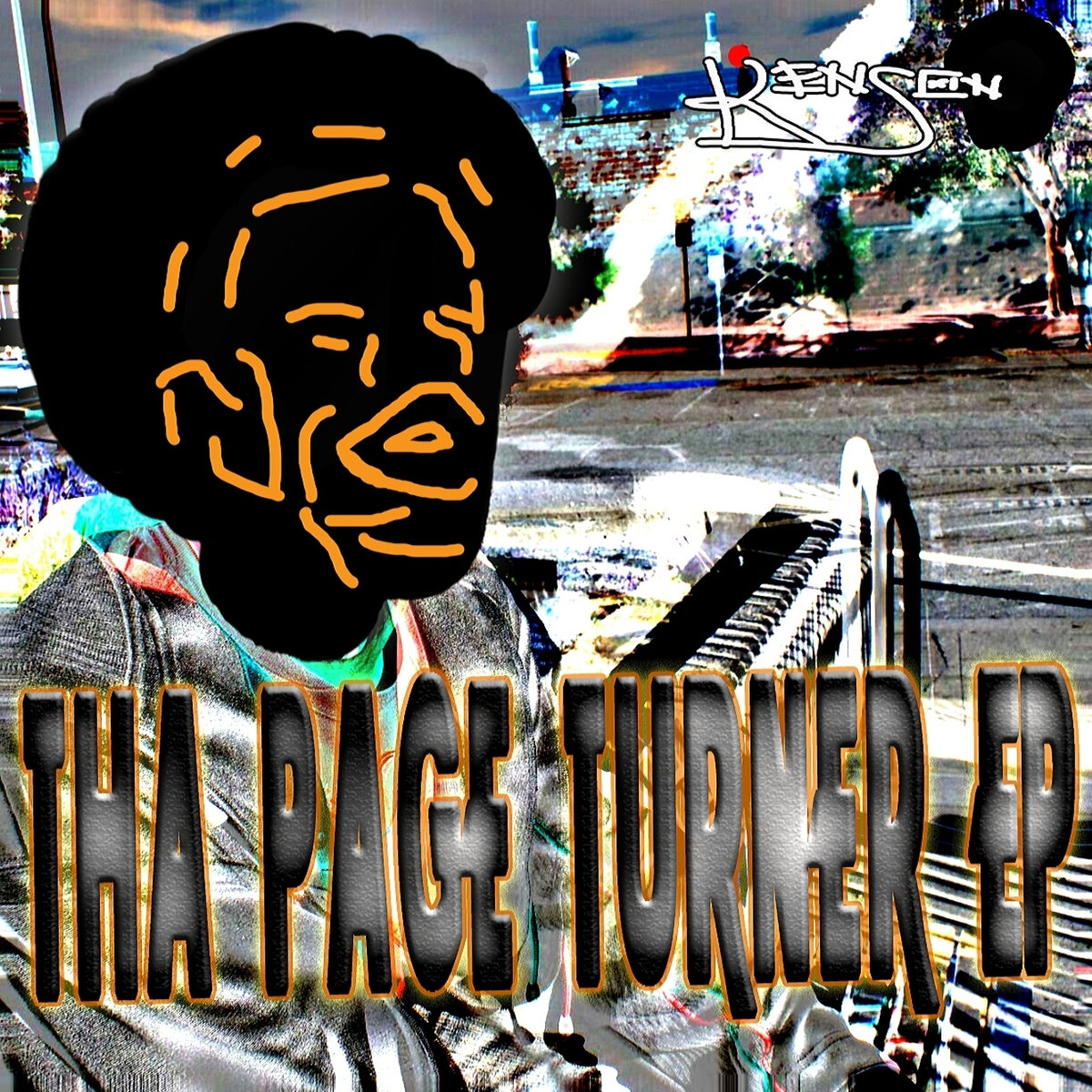 KenSon Williams quickly puts the vibe strongly into the day with the opening cut “Fasholy” from Tha Page Turner.  Am I digging this?  “Fasholy” yo!  Not only has Williams instantly demonstrated killer instincts on the mic and absolutely flawless metering & pace – the energy he’s putting into the words has serious intensity, aggression and attitude you can truly appreciate.  The passion is clearly here – there’s zero doubt about it.

The way “Fasholy” works will bring a smile to your face.  I read the write-up at Bandcamp and I was promised some real BOOM BAP RAP…and the large beat that starts the track lets you know that’s exactly what you’re about to be in for.  Within the first twenty-seconds…even though the beat is tight…your first impression will no doubt leave you wondering which direction this project will head and how much further the beat will develop.  And then the magic happens…I’m talking like, within the next FIVE seconds, KenSon Williams will have you beyond convinced you’re about to take a highly-skilled verbal-vacation into audio-awesomeness.  “Fasholy” is the song you want while you got the top-down rollin’ on the strip…it’s got massive party-atmosphere and roars with lyrical talent.  The precision movements on the microphone, the confidence and the straight-up skill make itself known – KenSon Williams comes out swinging on “Fasholy” and fully connects.

Proving that the bars KenSon rhymes on come in all shapes & sizes – the innovative ideas in the music of “River” are probably going to be a bit strange to the ears at first…the combination of violin & beat will eventually find a way to make sense to you, so just hang on for a moment will ya?  Williams heads into much more artistic territory in hip-hop with the combination he’s chosen on “River” – but the vocal-hooks are so strong alongside the beat that I’d be willing to argue this is still incredibly accessible to many people out there.  The pacing and approach he’s taken to these bars is professionally impressive- he definitely displays all the makings of a true star with is slick lyrical style confidently kicking all the ass.  If I’m being as truthful as I always am…I would have slightly brought the violin or cello sample down a bit in the mix…it does tend to dominate the mix.  Do I like the sound of it?  Yes actually…I do quite a bit and I certainly appreciate the idea – BUT…if I’m asking myself what’s the main element of what I want to hear in this particular track, it’s the vocals 100% because the ideas are so strong; as a result of the mix on “River” they’re a bit hard to focus on at times.  I like the hypnotic aspect that those string sounds bring to the cut but I found them pretty easy to get lost in and I kept feeling like I had to concentrate that much harder to stick with the rhymes that drive the track underneath.

Tha Page Turner continues to twist strange sound & tight beats into something creative, unique & highly entertaining.  I’ll say this…I hear a lot of rap…I hear a lot of hip-hop…it all comes through our pages at a steady pace – but there’s not really that many people out there I can think of or point to that really sound like KenSon Williams…and I think that’s really going to pay off for this emcee in the end.  There is SO MUCH personality in the rhymes he creates and an incredible amount of passion in the way he approaches each cut.  “Star” is as pure as entertainment & good-times can get…the ideas in this track are wickedly vibrant and superbly executed.  The verse itself is as outstanding as we’ve already now come to expect from Williams – but the chorus takes the energy of “Star” straight-up through the roof.  I’m impressed with the amount of innovative sound in the selection of what KenSon Williams chooses to rhyme to – and I think others will be too.  Everything I’ve heard on this EP packs massive value in entertainment for your face with vibrant, unique ideas that give a nod & respect to the old-school while boldly pushing the quality of the genre straight-up here in the modern-day.

The Berkeley, California rapper ends Tha Page Turner on a softer set of tones in the music but with every bit of the energy and passion he’s brought to the mic throughout his entire record on the final track “Go.”  There’s an awesome uplifting & inspiring sound that spills sweetly into the atmosphere of “Go” – it might have those off-kilter vocal-hooks in the chorus…but those are the same kind that have been tried, tested & true throughout the genre’s history all the way back to the legendary Biz Markie and even further.  One minute you’re not sure if you dig the approach – the next minute has you repeating and digging the hook and realizing it packs a memorably sweet punch.  Inarguably, there’s a bit more of ‘loose’ feeling to this final tune…but everything you’ll hear is still tight AF and the overall vibe takes on a higher degree of accessibility in its brighter attitude and inviting atmosphere.

Really impressed though…this whole EP really has a fresh energy to it that can’t be ignored; it’s experimental in all the right ways without going so far as to affect just how accessible and inviting these rhymes are to listen to.  Shout-out to Tai The 13th for the fantastic job on the mix & mastering…it’s a job really well done all around and highly vibrant to the ears.  KenSon Williams has put just the right amount of everything into these four cuts – I’d be willing to bet on this emcee being a truly endless well of creativity, innovation and quality ideas.