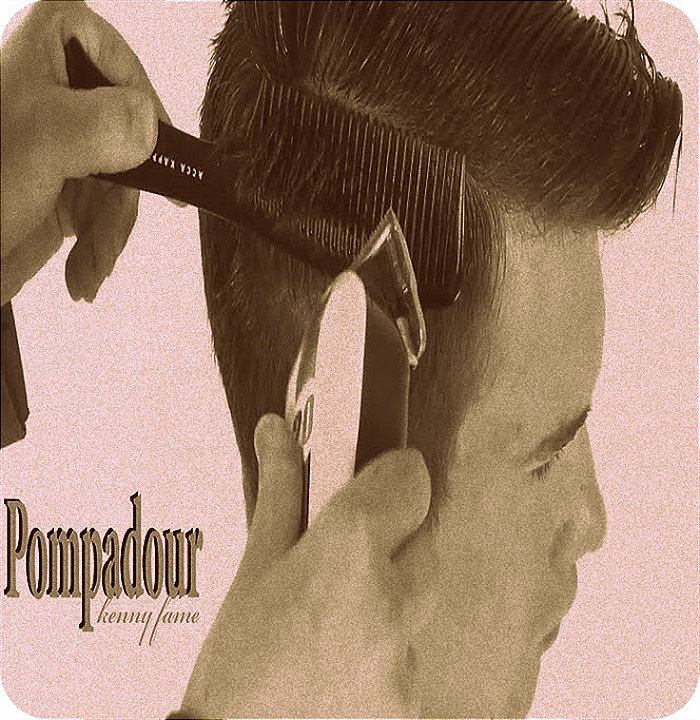 Kenny…you’re a heartbreaker man. You know I’ve been honest with you from day one when we’ve reviewed your music in the past…and you know there have been ups and downs through our expressed opinion on the previous records. You know I’ve been in your corner, as a guy that has wanted to see you evolve and grow as an artist – and also as a guy that’s truly heard that evolution in the past review we did on the Soul Of A Man EP. So…I know this isn’t an interview here…but my first question Kenny, is why are you making that support I want to lay on ya tougher for me this time around? You were on a roll! I like the ideas more than I ended up connecting to the performances on Pompadour, which does take his music in a different direction than it has in the past.

But the issues present themselves early within the mouthful of words that the opening tune “Oh What A Night” becomes with a few spots of timing & tone slipping out far enough to take away from the captivating song this could become. “Oh What A Night” has its moments of greatness…not his strongest lyrically and a little surprising as the lead-off tune for its truly stripped-down nature of just Kenny’s voice and the guitar. Some of those words are a little lost as he rolls through them quickly…the additional backups were a little short of the mark in their tone; as much as I dig this guy as a human being…I can’t help but think that Kenny is rushing himself somewhat. He’s made an extraordinary amount of music over these past three years…but with his display of ability to be more than capable in so many past-instances…again I can’t help but wonder what the man might achieve if he took a breath or two between albums!

A tune like “City Lights” hits the mark a lot closer. Much brighter and made in a truly feel-good style that echoes the music of our past with a 50’s vibe running through it. I’ll say this about it – he’s done a great job in writing the song & hooks and all that…the verse connects to the bridge/chorus very well in this song – as far as the chorus is concerned…my ears tell me it’s just a little wide of the goal for tone – but my brain tells me that this works somehow…it’s a bizarre vibe, but a happy one…I dig it overall. Guitar work is exceptionally good…really like what’s happening there on “City Lights.”

“Friends” is a tougher one. There are some beautifully executed ideas in the guitar throughout this entire song; its melancholy feel & tone make for a powerful atmosphere. Kenny is in-behind the music by a considerable distance in the mix on this one…and when he does breakthrough to the top, it’s hit & miss throughout much of the vocals. Bear in mind, a song like this is much more akin to a performance or art piece than a commercialized song…and I do dig that. There are many points where Fame gets the emotion across exactly as I’d imagine he’d want to…but others where I believe he’d have to admit could have benefitted from one or two more attempts on the microphone to get it all perfected. Kenny my man…where’s the fire & what’s got you rushing your art my man? A song with potential like “Friends” has deserves that extra attention.

As does “Hometown Glory,” which is another tune that has strong potential, but drops a little focus in towards the middle of the song and begins to slip around a bit in tone. Musically, I think this track has a really quaint, innocent and small vibe to it that actually makes it really pull you in close to listen. Kenny starts out singing quietly, but also at his best as “Hometown Glory” starts out…he’s nailed his melody in the low-tones…they’re quiet but they’re completely formed and wonderfully performed in the verses of “Hometown Glory.” The chorus struggles a little tone-wise, but I think Kenny redeems himself on this track through the additional creativity he flexes in the inspired-end of this tune.

Perhaps the toughest one to get my head around though…was the final tune, “Stay (For Jazz).” So…okay…I put my jazz-helmet on…and I mean, it’s JAZZ right? So anything is acceptable…I get that…by far and away the genre with the least amount of rules. What I don’t get…is why it would be the promoted single from the album as it’s very sound, structure and style are all well-outside of the typically-accessible sounds out there in music-land. Had the overall EP been a little closer to the vibe in “Stay (For Jazz)” then it would make more sense; but this final tune is unique unto its own, and the other four…well…they sound closer to the other four. I’m a jazz-fan…I don’t listen to it on the regular, I can admit that – but I am a fan of jazz and the freedom that comes with it…and again, I can appreciate that this is more of an art-performance than a radio-hit…but I still think there’s more time needed to be spent on making this an art that people’s ears will readily accept without passing judgement.

So…it’s a tough one for me truthfully…again, I really do respect Fame’s desire to grow and evolve…and I do like that he’s got the passion, inspiration and creativity to be constantly making music. True evolution of course, takes time…that’s not something that happens overnight; plus you add in the twist of direction that Fame has put into these songs from what he’s done in the past…and it creates a whole new set of challenges to go with the slow-pace to evolution as an artist. It’s not back to square-one for Fame…but more time was definitely necessary here to perfect his art on the Pompadour EP.

Find out more about what’s up with Kenny Fame at his Facebook page: https://www.facebook.com/LeviMusicHD