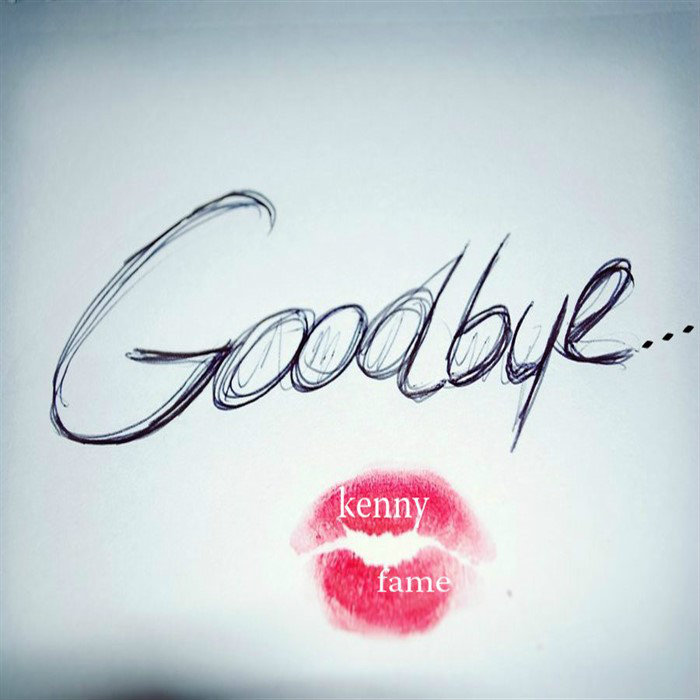 Kenny Fame! WHAT sir…is your excuse? I have been expecting you since the moment the clocks & calendars turned over to 2016…like, 12:01 new Kenny Fame instantly kinda-thing…you’re LATE Kenny!

For those of you that aren’t familiar with our consistent reviews on this one-man-music-factory…you’ll have to catch-up quickly…there’s a lot of history, music and evolution that’s been happening in the backstory between sleepingbagstudios and Kenny that has already been established. I will say this before getting right into his latest EP Goodbye… – I honestly don’t know which one of the two of us actually works harder or writes more often when it comes to Kenny Fame. Considering I don’t feel like even Stephen King himself could take me on in a battle of word-counts these days – that’s saying quite a bit.

Much like Kenny…I’ve learned a lot along the way of this journey in music. While he was still testing the waters and refining his sound – I was still finding my own voice here on the pages of SBS and the various other projects we’ve taken on; mistakes were made and learned over the course of the time & process for both of us…and I like to think after what I’m hearing here on the Goodbye… EP that I can speak for both of us in saying we’re doing much of our best work right in the here & now.

Of course this review isn’t about me or for me to pat myself on the back…but Kenny’s ridden out a lot of ups and downs and always provided a strong desire to learn and truly has evolved…suppose I’m saying I can appreciate what he’s gone through on a similar level through a different medium doing what I do. What I have always appreciated about Kenny is that he never quits – he may stumble but he never gets knocked right out to the point where he doesn’t come back swinging twice as hard.

With the exception of reviewing this EP’s title-track a couple months back…last time we heard him was on the Pompadour EP – a record that saw this experimental artist trying out new things that didn’t play to his strengths as well as music he had made in the past. Immediately releasing “Goodbye” as a single straight afterwards was a truly brilliant move; Kenny is literally and audibly ALWAYS working on something and with that single he provided much hope that all his experimenting and challenging himself once again to discover new terrain and styles for his writing was indeed going to lead to something. Considering the roll he was on for his Soul Of A Man EP…I was already stoked to see this guy immediately had more material at the ready…stronger material in that one single than what I felt like I had listened to on Pompadour. Keep in mind…full props to Kenny…each of these records have their own style and sound…he’s really done a lot to put himself out there and tried more things in music than you’ve tried vegetables at your grandmother’s insistence.

Not to jump ahead…but the overall conclusion of the story of the past of Kenny Fame to this point is that the last single we reviewed, “Goodbye,” was strong enough to take that next step further and build an EP full of winning tracks for Kenny’s ideas and performances. That always says something…when an artist brings back a song into another part of their career or catalogue it’s usually for one of two reasons – either it’s a really damn good song showing up on greatest-hits albums…or the song has never been written or recorded exactly as the artist or band envisioned, and through endless remixes you see the perils of a band in turmoil twenty-mixes deep trying to still get it right. You can consider Kenny’s track “Goodbye” to fall on the positive side of that scenario – it was a great idea to continue that song’s lifespan…but now he really needed to make sure the material he’s going to put along with it is of equal-quality…and that’s honestly not an easy challenge as “Goodbye” was a truly stunning song. You can read about it here in the past review on the title-track and I’ll concentrate on the new stuff today for ya.

“Set It On Fire” opens-up the new record for Kenny…and I gotta say – this was already immediately a pleasant surprise. He already knows my mathematical theory on his music…Kenny knows I’m expecting this record to hold many great songs for him…and from what I hear at the outset of Goodbye…, he’s found yet another ‘something’ that works extremely well for him. It’s almost like an electro-reggae/island track in the chorus, which at first listen I thought was so-so…on subsequent listens, this hook becomes sharper and sharper as it buries itself into you. It’s a danceable rhythm…and really has that hypnotic/captivating quality in the vocals that really pulls you in; it’s a good start – but after listening I can tell you there’s even greater to come immediately around the corner.

Ironically, this blissful breakthrough comes through the second-track, “beautiful DISASTER.” Easily the most powerful chorus that Fame has designed in the time I’ve spent listening to his music from the very beginning – in two words alone, he’s conquered the art of the hook here on this powerful song. He’s always written from an impressively personal place…”beautiful DISASTER” isn’t exactly the happiest song in a sense, but really examining the lyrics reveals a song that ambitiously takes on the subject of appreciating the beauty in even the most personally tragic events and affairs of the heart, love & life. The verse is solid, Fame sings it well…but the magic is really the pacing and melody in that chorus along with the song finding a powerfully-thick low-end that envelops your mind, adding to the thought-provoking nature of “beautiful DISASTER.”

Heading into “Come On Over” he brings-up the energy and lightens the atmosphere in his brightest melody so far, taking us out from the dark and into the light as the record makes a highly catchy transition. “Come On Over” would definitely make a solid argument for one of, if not the strongest verses that Kenny has written and assembled…this thang FLOWS! Loved the groove, the pulse to the music and energy in the verse…fantastic! The glitched-out chorus…not so much my favourite…not really sure what it was that it was entirely…I think by comparison with the verse, the two-parts felt a little disconnected from each other. Know what I mean? I felt like I’d appreciate both parts more on their own as opposed to finding them here together…but the sheer STRENGTH in which Kenny is beginning to write with is ever more-so impressive overall, no doubt about it.

Case in point – “I Need U.” Kenny delivers this song flawlessly from the verse to the chorus. “I Need U” starts instantly with gigantic, feel-good hooks…there’s no denying a song like this that just makes you want to move. And for me personally…I just want to freakin’ celebrate WITH my man Kenny when I hear him this confident, comfortable and right in the flow and groove of his music like this. “I Need U” is a perfect dose of massive ideas that swirl together like the brightest of colours in your entire set of paints. Doesn’t quite matter which angle you look at this song from…Kenny has found himself what could certainly become a huge hit in my opinion – this is the kind of song people truly love to put on all the time just to bring-up their day and brighten their mood.

Again…check my thoughts out about “Goodbye,” the EP’s final tune here…but let’s just say that it makes for a completely strong ending even after being the beginning of where this entire EP began and branched out from. A song that truly holds-up over time…I wanted to hear “Goodbye” just as much as the brand-new tracks this time around…a real testament to Kenny Fame really pulling this new record off with some of the best songs and music of his career and the strength of the material he wrote to accompany his title-worthy tune.