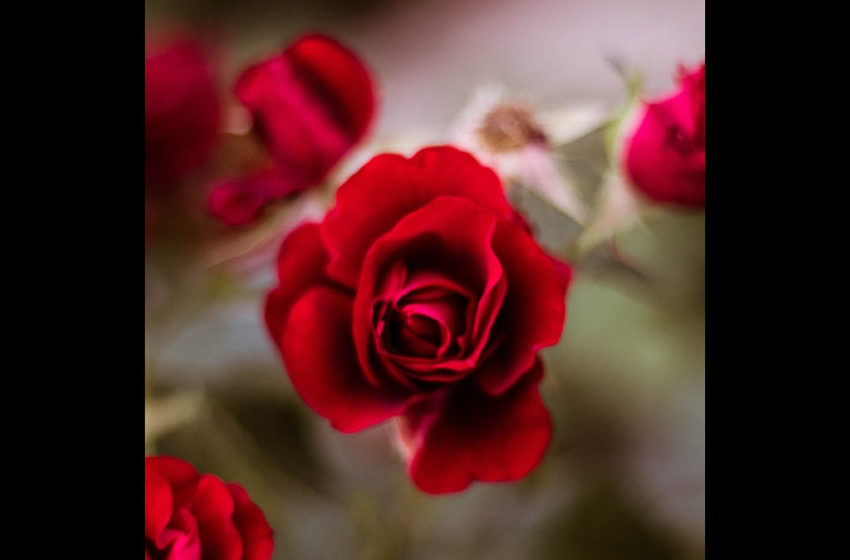 The different approaches to the m-i-c, styles, and sounds from Keh Wolf are more than flexible – they’re like altogether separate parts of his personality.  I’ve got a handful of singles here to check out in review – and upon first impression, it certainly seems as if it might be best to expect the unexpected from this artist.  Trust me…even between the first two tracks that I checked out, “Not Sry” & “FLEXING!” – it was like hearing two completely different dudes altogether…I mean…it IS, isn’t it?  The third track ”No Friends” ends up being a lot more similar in style & sound to one of’em than the other, but you get the idea…when you’re listening to something for the first time and trying to get that overall impression of what an artist/band is all about, you’re trying to find those tangible threads of cohesion that tie it all together.  Keh Wolf achieves that on a 2/1 ratio here…that one outside track is a curious move…like I said at the beginning, he might just be checking my pulse to see if I’m awake here…

So we’ll start with that track…that outlier in what seems to be the sound/style of Keh Wolf, because I am awake, and the words of “Not Sry” definitely had me raising an eyebrow or two.  Laced with sexual innuendo all throughout the words, some of it subtle, some of it nuanced, some of it…well…let’s just say there are several moments on “Not Sry” where you can’t possibly miss what Keh Wolf is gettin’ at or mistake what he’s sayin’ – ya feel me?  You can read in the credits that this single is produced by Kid Ocean…but beyond that, we’re left to assume that’s Keh Wolf on the mic, even after we hear what’s happening in “FLEXING!” and “No Friends” to follow – that’s how different & widespread the sound of these cuts really are!  So credit to the star of the show…on a first time experience like it is for me right now, hella confusing, but at the same time, props to trying out completely different ideas with such commitment that these songs come out sounding like they’re from two totally different artists.  “Not Sry” is exactly what the title implies – Keh Wolf ain’t apologizing for switching up his vibe here, nor is he looking to take back anything he’s sayin’ in the words of this cut…the man is “Not Sry” and he makes that much plenty clear.  Best way I can put it…is that while there’s still a modern-day relevance here that could have the viral ways of the internet latching onto the uniqueness you’ll find on this cut…but I’d be banking on the skills, instincts, & direction in sound that he flexes with finesse in the following singles “FLEXING!” and “No Friends” if I were Keh Wolf.  I wouldn’t go as far as to say that “Not Sry” is a novelty cut or any kind of gimmick to trick you into listening in that sense, but there is definitely a looseness to this particular vibe that you just won’t find at all on the other two, arguably more serious, singles.  All that being said though…if you know the power & potential for songs like I’m describing, you’ll know that a track like “Not Sry” is bound to be the kind of song that’s gonna get stuck in your head for days & days.  Well produced though, props to Kid Ocean on that, everything is sounding on-point in the mix and Keh Wolf gets bonus points for personality when it comes to what he brings to the mic on “Not Sry.”

I mentioned all this stuff for a reason of course.  Like, if you were to take the same path & course of listening to Keh Wolf’s singles that I did, then the impact of how EVERYTHING changes on “FLEXING!” after hearing “Not Sry” – I mean…it’s the kind of head-shaking moment of clarity where you’re like, ‘ohhhhh – THAT is what this guy’s really all about.’  Of course it’s impossible to pin anyone down in just three of their songs, but the confident way that Keh Wolf stylistically flows through “FLEXING!” sounds like he’s right in the exact spot where he belongs, right behind that microphone & rockin’ it.  And I ain’t gonna lie, there are additional advantages here too…the lyric-video for “Not Sry” is a lot of fun & really well put together, but the visuals that come with the official video for “FLEXING!” that put Keh Wolf right there onscreen for ya, definitely help in pushing this track over the top in all the right ways.  Dude’s entertaining in the vid & you can see he’s got what it takes to connect with an audience, the shots of him out in the snow overlooking the city & surrounding scenery all looks absolutely killer – so I mean, what I’m getting at is that Keh Wolf is “FLEXING!” both verbally & visually here – this single comes out with zero flaws and a highly relevant sound for what’s happening out there right in the here & now.  Not that I need to tell this guy that…he’s already racking up thousands-upon-thousands of hits on the video & single since its release in January, so clearly the people out there are diggin’ on what he’s layin’ down.  Can’t say I’d blame them at all – Keh Wolf makes mad moves on the mic and shows he’s got the skills, swagger, and sound to compete with the best on your playlists out there.  Don’t think that the ladies have left his thoughts though…he’ll make sure to cover that once again in the conclusion of “FLEXING!” – I ain’t sayin’ he’s got a one track mind, he’ll take you through several adventures through his thought process…but you know…suppose all I’m sayin’ is that this guy FUCKS.  And he’s proud of that – word up.

“No Friends” ain’t exactly gonna be the happiest song that you’re going to hear this year, but it’s a good one too.  Not sure what’s got KW’s mood swinging from the upbeat vibes we found on “Not Sry” and “FLEXING!” – but he’s definitely not in the greatest frame of mind on “No Friends.”  That being said – whether or not it’s 100% true or not, I think just about everybody out there can relate to feeling like they’re without support from their friends, or alone when it comes to how they gotta soldier through this world.  And while that might be the case at times, even for Keh Wolf, I think the best thing to remember is that individually, there’s still a ton worth conquering on this planet, friends or no friends.  Like for example, as he’ll tell ya on this cut, he’s in the studio with “No Friends,” doin’ the lone-wolf thing…but like…I mean damn homie…if you got skills like this, who the hell cares?  I’d just keep my head down & do what I do if I was Keh Wolf…friends come & go, but the music lasts forever, you feel me?  Besides – he’s already comin’ at it all the right way…you take these real feelings and situations, and ya turn’em into art…it can be just as cathartic as entertaining.  He’s diggin’ in to the differences between an acquaintance or fair-weather friend as opposed to a real homie that’s got your back 100% – and many of you out there, you know the difference all too well, it’s huge.  There are times where there ain’t “No Friends” around…that’s facts, that’s reality…Keh Wolf might be stuck in that moment here, but at least he’s found a way to use that energy and turn it into something more by making a track like this to vent it out.  No question it’s the most serious & melancholy vibe that you’ll find in this set of three songs – but it’s also one of the best in the set as well; Keh Wolf works the modern-day R&B/Club/Trap vibes well – even on “No Friends” when he’s at his lowest, he’s still flexing skills that’ll shine right through the heavy atmosphere & downtrodden feelings he’s singing about here.  While the sadness found throughout “No Friends” might end this particular first-time experience with Keh Wolf’s music on a bit of a down-note thematically, it’s another highlight on how relevant his style & sound is for today.