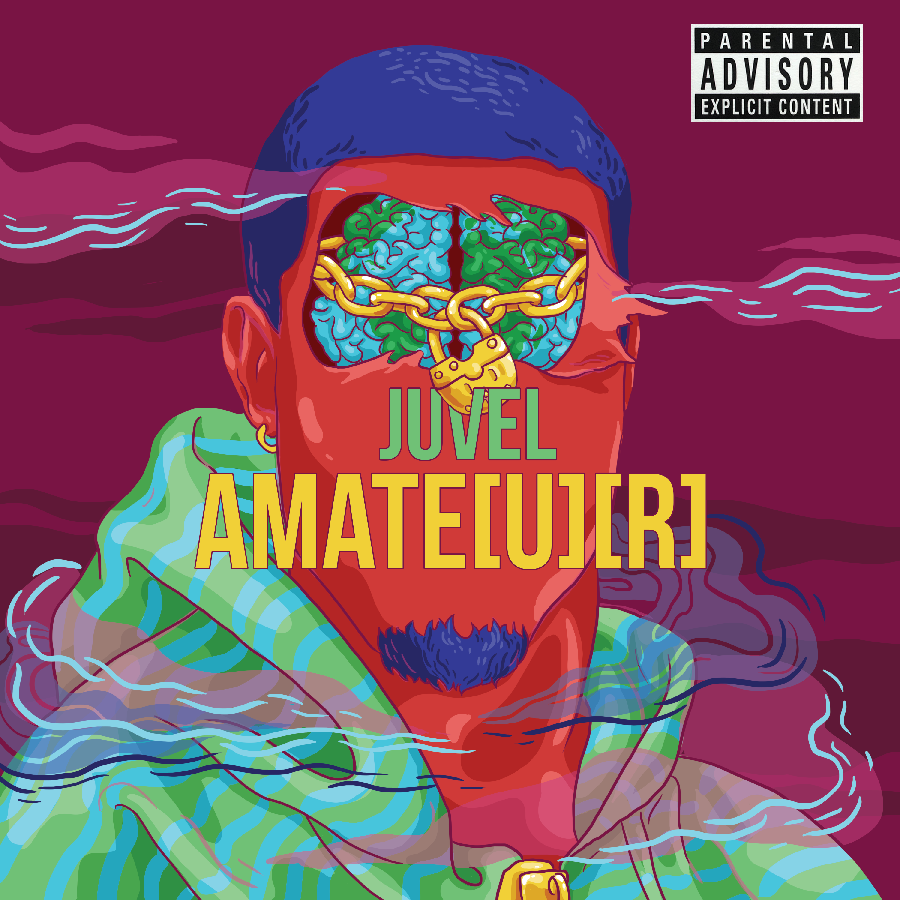 Let me put it this way…after my last 24 hours…believe me when I say it’s a million times better dealing with an Amate[U][R] artist than an amateur management team!  Juvel’s our kind of people…he’s patient…a solid communicator in his correspondence behind the scenes just as much as he is in the music he’s creating…he might still be fairly new on the scene but he could certainly already teach other people out there in the industry a lesson or two about how to properly represent an artist.  Seems like a standup guy if you ask me…Juvel’s done a great job of keeping his music & words on a professional level.

Listening to “Stack$” – it becomes pretty clear what you’re likely to hear from Juvel content-wise.  We’re likely talking bitches, cash, drugs etc…the standard for much of the rap/trap you’re familiar with.  Juvel sounds young still…give him some time to recognize there’s not much left to be said in these subjects that hasn’t already been said a million-times over by those that have paved the way for him to be where he’s at today.  That being said – who can blame a guy for dreaming about “Stack$” right?  I might feel like this has all been said in one way or the other throughout my time listening to all the rap-genres and sub-genres…BUT…what Juvel’s really got working in his favor, is the flow itself.  I don’t really mind hearing a story or two that sounds familiar as long as it’s told in a new & exciting way – you feel me?  It’s like when people bag on movies being redone…I’m not one of those people…I actually have a lot of love for re-examining a concept, story or style and trying to bring something more to it – and I felt like that’s where Juvel comes in.  Dude sounds extremely confident while rhyming on “Stack$” – I mean…Juvel is so seriously locked into the rhythm and flow on his bars that he barely comes up for air!  When you string sets of words together like this…and you add in the unique tone he’s got to his own sound & style on the mic…it actually comes out sounding really impressive, fresh and new.  So I’ll give the man some credit here…he’s out there living his dream as he says in the song…and he’s clearly putting everything he’s got into make that dream one that he never has to wake up from.  A career is certainly a possibility here…I hear no reasons as to why people wouldn’t be seriously entertained by the vibrant flow of words coming at you on the constant; Juvel’s sounding big, bold…and most importantly – ready for that next-level awaiting.

When you listen to “YEEZY” – it becomes clear just how much talent this wordsmith really has.  Bar after bar, Juvel brings a lot of character and personality into the mic…the stories he writes into his songs, the insight he has and the genuine way he approaches his material really highlight the skills of an emcee in full-control.  That can count for a lot!  On “YEEZY” he takes his softer tones into more gentle terrain…paces himself out, allowing himself even a couple breaths during his roll through this cut.  Dig the flow again, dig the subtle beat he’s working with and I dig the effects he’s choosing for his vocal sound…everything seems to stack up pretty much in his favor – and the result of that, is of course, entertainment for you.  He’s written a solid hook for the chorus, delivers strongly in the verse, and works really well within the confines of the bars & the beat, maximizing each moment with highly-stylistic rhymes that move with a slow-burning intensity.  Right around the 1:30-2:00 mark…LISTEN to the groove this guy finds…he’s feeling the flow and completely into the moment – again, it makes all the difference in the world to be this prepared, professional and confident.  You could probably even argue that “YEEZY” is somewhat of a love-song…there’ll definitely be some ladies out there that pick up on his vibe and dig his approach.  According to the lyrics from Juvel, he’s ‘five-star fucking’ – so there you have it ladies, he’s laid it all on the line and makes a strong case for himself…the next move is yours!

The smooth beat he’s chosen for “Genius” really works.  Musically, it’s one of my favorite beats that he works with on the entire Amate[U][R] record…this is seriously great stuff.  It might not be exactly the most humble track you’ll ever hear in your life – but not much rap-anything has a humbleness to it…you’d be looking for some dedicated hip-hop if that’s what you’re after.  “Genius” flexes Juvel’s most confident rhymes and outlines the pressure he’s under that he’s rising-up to challenge.  Discussing his own personal life and taking a moment to hit on the realities of education and whether or not they’ll lead him to the life he’s looking for.  At the end of the day…it sounds like it’s the music that’s got the most pull over Juvel…”Genius” is a detailed rhyme all about how he’s finding the place where he belongs by pursuing his dreams with confidence and the knowledge that you either put everything into it, or it’s best to pack up your bags and go home.  Again, effects play a strong role in his sound, particularly in the main hooks of “Genius” – it’s all working strongly in his favor here from the beats to the rhymes; he’s got ‘all aces in his hand’ and he’s certainly showing the strength of his cards by laying them all out on the table for all to see on what sounds like it becomes a much more personal track than some of the rest on Amate[U][R] by comparison.  I’m usually into something a lot more humble than this…but I understand that humble ain’t ever been what rap is all about…Juvel marks his territory on “Genius” and other emcees would be smart to take notice…because he’s clearly not going to let anything, anyone or any obstacle stand in his way.  He does MENTION that he’s humble in the flow of the lyrics of “Genius” – but that’s a pretty hard case to make at the same time as rhyming about being a “Genius” – but there IS smart contrast hidden within the meanings of the words that reveals his more humble nature…you’ve just gotta pay attention and dig past the surface-level of the words to understand that, and him.

Where I think that you DO experience that humbleness from Juvel, also goes a long way to reinforcing the points I’ve been making all along on what connects to people – because “Who Says?” is clearly the best of the tracks I’ve experienced in this set of four.  I’ve enjoyed what I’ve heard all along the way…but undeniably, this song sounds much more like the sound of a Juvel that’s got his head on straight and able to reach out to the people in ways that’ll impress them even more.  Hitting up a combination of jazz/soul/rap combined – you get a really smooth, chill beat and an insightful set of revealing words that shine a light much brighter on the real heart & soul of this emcee and what he’s all about.  “Stack$” are a great thing to have…but they’d mean nothing at all without some love in your life; Juvel clearly knows that…”Who Says?” speaks to the more sentimental-side of this rapper’s personality.  Personally, in my opinion…any time you put a little more of the real ‘you’ into a track, you get stellar results like this – I’m a huge fan of the ideas he’s put into the words of “Who Says?”  There’s one lower-toned set of vocals that jars a bit with the smoothness in the overall sound…but nothing so rough that it would make you want to turn this one down…this is a track to turn up, no doubt.

And for what it’s worth…I’ve checked out the rest of the set on Amate[U][R] and I think you really DO end up exploring all the realms of Juvel’s personality throughout the course of the full record.  “Stack$” gave me a bit of a different first impression of this emcee, whereas the official album starts out with the self-titled cut “J U V E L” – which really makes all the difference in the world in regards to how you’d first perceive this artist and what he’s all about.  It’s honestly one of the strongest cuts on the record; the questioning of himself and what he can bring to life and the mic really sounds authentic, honest and REAL in comparison to what sounds like it’s intended to be flashy, where we started with “Stack$.”  Let it always be said – that first impression can really count for a whole lot when it comes to who listens…and like generally ALL the album-samples that come my way, it’s extremely rare that an artist/band really understands what might connect best to the people out there.  I think songs like “J U V E L” really speak strongly on his behalf, or the guest-star/hooks/music of a cut like “1 Night” – both tracks I’d have likely recommended over “YEEZY” or “Stack$” personally.  “Reason” & “Why Love” maybe not so much…decent tracks, but once again dipping into similar territory as “YEEZY” and “Stack$” – fans of these subjects will always be fans of that stuff…so there’s that; definitely no shortage of people out there that would argue against a whole lot of what I’ve said here in this review and feel like those are the tracks that really resonate.  Bottom line is Juvel finds an entertaining way to deliver his rhymes each track that comes up on the playlist of Amate[U][R] that’ll unite people through the dynamic approach and passion he puts into every song…his flow is always on-point and his delivery is seriously pro from performance to production.  The more he allows himself to find those most expressive, real, honest & humble connections to the words & music, I think the better he’ll get.  Could just be me…but that’s how I’m hearing this emcee & his rhymes; definite skills on display and even more potential still in the tank.

Find more music from Juvel at his official page at Soundcloud:  https://soundcloud.com/juvelmusic