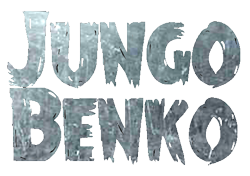 Very interesting assembly of tracks here from Tel Aviv’s Jungo Benko! Gotta admit, I’m not too familiar with the Israel music scene right now, but if this is any indication of what’s happening there, I might just pack up and move there for a bit. Jungo Benko’s latest self-titled EP reminds me of some of the best releases from the Sub Pop-era of the grunge-music heyday. That’s not to say Jungo Benko is making grunge-music per say; it’s more a reflection on the style of production, songwriting, and a magical time period in music much like today where a little more digging and effort to find unknown bands paid off with a maximum result.

Right off the drop, you’d almost be more apt to label them as a psychedelic-rock band. The first two tracks reminded me of a band I STILL love and listen to, despite the fact that they never ‘caught-on,’ a band called Dandelion. Much like that thrash-grunge band, it sounded like a gritty mix of alternative guitar & bass lashing out against some incredible pop-minded instincts that drive the hooks of these songs. “Edgar,” is a perfect start for me…it’s like Dandelion met the Beatles and they decided to fucking rock the place to the ground. Excellent groove, absolutely fantastic changes in this dynamic track, and excellent vocals and flow to go with it. This…is the way to start an experience.

“Drunken Mother,” again reminds me much of another band from that same time period…anyone remember King Missile? If you do, it’s probably for the track “Detachable Penis,” but if you were one of the few people brave enough to look past that track, you’ll hear the similarities here in performance and again in production. Chances are, this EP could be a DIY effort, sure, it has that potential through the sound; but it could just as easily be produced by a studio-dude that truly knows his shit. Jungo Benko’s music BELONGS with a little bit of grit & mischief to it.

And MAN…the guitar-solo in “Drunken Mother,” should easily sell you on this band having both incredible skills and copious amounts of musical integrity as this song comes crashing to an end.

“Voices,” is a track with sounds and ideas that might remind you of something more modern like Flobots. Thankfully…well hopefully, this shouldn’t remind you of rap/rock combos like Limp Bizkit. There’s a much more hip-hop inclined mind at work here on this cut, and much more natural ability and skill on the mic than Durst could ever hope to have. In a sense, it’s nearly talked-out rather than rapped, but it’s truly spit into the mic with passion. The bass and guitars, again, just completely stand out while they kick ass all over the funked-out grooves & rhythms in this track. Personally, I think this works for them; it’s a twist from the sound we’ve already heard on this EP and shows that Jungo Benko has much more than a single arrow in their musical-quiver.

“Mr. Banko” is another excellent example of the post-grunge effect. This again, sounds like a psychedelic version of Oasis…maybe what would have come out if they had as much access to the ‘good stuff’ as The Beatles were drawn to immediately. There’s definitely a British influence on much of this music, presumably coming from Jason Specter’s experience and time spent at his original hometown of Manchester. When you hear how it combines with the American grunge influence in a track like “Slide Away,” you realize that this worldly band has truly taken some of the very best influences from continents spread far and wide, and brought them together here in one explosive combination.

Drummer Erik Rutzick, originally from the USA brings it up another notch as he pounds out the beats on this final epic cut, “Slide Away.” With more furious guitar from Specter, and an incredible low-end groove courtesy of Alon Rosenfeld on the bass; this track leaves an impactful and memorable impression upon listening ears.

You should have already been convinced up to that point in the EP, there’s plenty here to hear…if you’re really listening. I think this could be the start of a truly inventive and innovative sound that rock music really needs right now and I am definitely looking forward to hearing more from Jungo Benko in the years to come. It’s real, it’s raw, it’s gritty and menacing as fuck at times…what a wicked & necessary break from the plastique of the mainstream.

Find out more at their official page at: http://www.jungobenko.com/