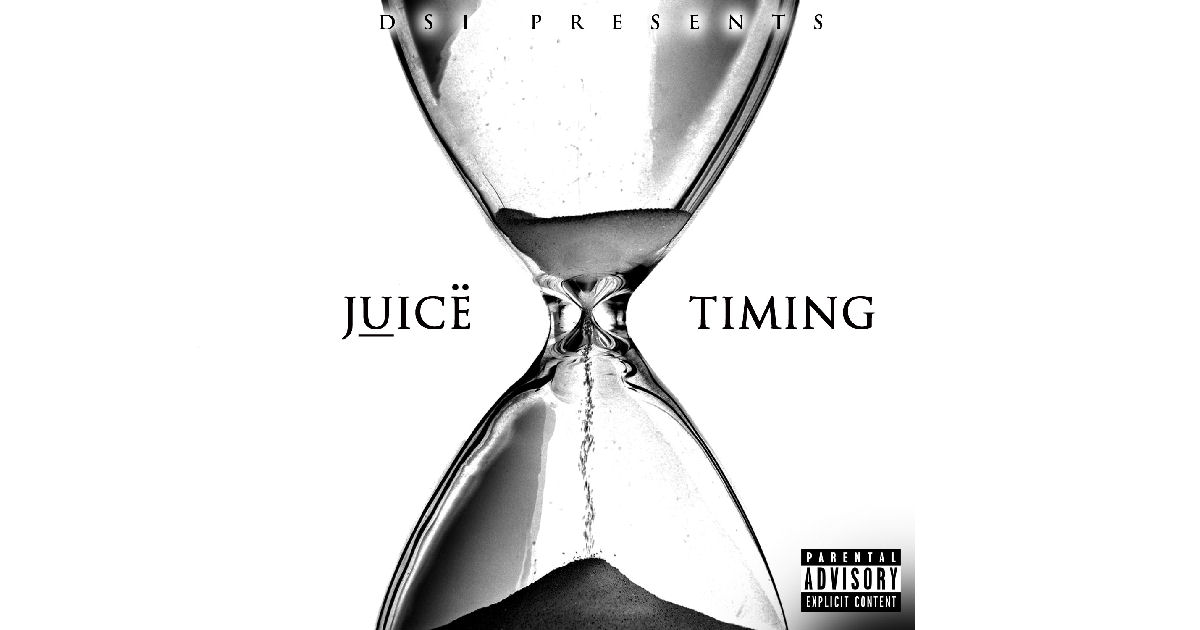 Juice is having himself a damn good year…new cuts, new releases, new record that just got put out called Timing officially on July 19th – he’s heatin’ up the summer with a solid selection of cuts for your playlist.  We got ourselves a preview of what you’ll find on Timing – plus we’ve got another track that from back in the day called “What It’s Gone Be” that’s not on the record, released back in the day in 2017 – let’s find out what’s up.

“Gunshots” was the first cut I heard from Juice…and there’s just no way you can experience this cut the way it’s intended unless you turn that volume right up to the rafters loud’n’proud to get that good-good low-end vibe fillin’ up the whole space you’re in.  Loved the way it starts out with the news sample & how it sets the stage for the drama-filled scenarios that the lyrics contain afterwards – definitely an enticing way to pull us in to “Gunshots” right from the drop.  As far as the main chorus-hooks are concerned to follow…I’m probably more split on that; sometimes it’s got the metering I’m looking for, other times we’ve got an extra syllable or two that make it a bit more jagged.  That being said, I’m a firm believer that when it comes to Rap/Hip-Hop music, the main star of the show should always be the verses anyhow – think of how many words you find in both parts of any song by comparison!  The bulk of what’s being laid down & the writing is always in the verses of a Rap song – and that’s where Juice makes the most of his magic happen without question.  I ain’t gonna say the hooks don’t work – they work fine – I’m just much more impressed hearing him handle his business on the bars, that’s all.  What I like is that you can hear the definition between each part in his delivery as well; regardless of whether or not you feel the hooks work or don’t – you can hear that Juice shifts his sound to make each part stand out as it should.  After the more whispered approach to the hooks starting out the song, it ends up making those initial bars & verses from Juice come out sounding completely large & in-charge – that low-key approach to the hooks ends up setting up this emcee to make a huge impact through his words as the song continues on.  The confidence is right where you want it on the mic when it comes to his delivery on the verses of “Gunshots,” ain’t no doubt about it – all-in-all, I ain’t complaining – it’s solidly produced by trb feddy and Juice makes the most of the menace & mayhem you’ll find on this track.

Splashing a bit of soul into the vibes of “The Plugz Daughter” with an excellent assist from Hottub T – together they amp-up the antics on this second single from Timing, which actually occurs earlier on in the official lineup of songs on Juice’s new record that “Gunshots” does.  Definitely no question about how Juice feels about low-end in his music – the bass on “The Plugz Daughter” is massive – it was on “Gunshots” as well, leaving you to assume that this dude demands his cuts provide you with a back massage as well with the rumble they all come with.  In the case of “The Plugz Daughter,” I feel like we get a better dose of hooks that make a memorable impact and music that really stands out for all the right reasons.  I mean…look…that ENORMOUS infusion of low-end is going to get noticed by one & all – that’s just how damn LARRRRRRRRGE it is – but make sure you listen to the other incredible elements in the music surrounding it that all stack up to a solid W for Juice and Hottub T on “The Plugz Daughter” as well – tons of rad melody floating through the atmosphere of this tune that can’t be slept on people.  So wake up & pay attention will ya?  Not like anyone out there has a chance of sleepin’ with the low-end rumbling away like it does on this single from Timing – and you’d miss out on extremely solid bars from these two emcees as they carve up this cut and split duties on the mic.  Juice holds it down perfectly with the first set of bars, and Hottub T lights up the latter half of this track with added supercharged presence & personality – together they fire more shots here than you’ll find on “Gunshots” previously, emptying out their clips verbally & metaphorically as they bring their A-game to this single-worthy cut.

SURPRISE!  Juice was addicted to low-end vibes back in the day as well – it’s the first thang that’ll hit ya on “What Its Gone Be” – a cut that proves he’s always had a massive presence on the mic from day one.  Detailing the struggle, the grind, the hustle, and the ladies that end up between the sheets with him as he weaves his way through the bars of “What Its Gone Be” – were it not for the fact that the time-stamp on this tune online shows it came out a couple years back, I’d assume this was still fresh out the box and built for this new record he’s got.  Given that it’s from ’17, I get it…you can only reach back so far when it comes to what you’d wanna put on a brand-new record two years down the road – but facts are facts, the production on this cut is extremely slick and it’s still a highlight cut in the catalog of Juice’s tracks overall.  He’s keeping it real while kickin’ it stylistically on the mic as well throughout the verses & bars on “What Its Gone Be” – and for what it’s worth, I think it’s Juice’s best run through the hooks of the chorus as well – it’s a tight single from start to finish that flexes flash, finesse, and a seriously vibrant sound that’ll leap from your speakers from the music to the microphone.  Definitely a track that reveals this homie has always had what it takes to grip the mic with confidence and spit rhymes that are relevant for what’s up in the scene in the right here & now of 2019, even back when he was rockin in 2017!  That’s what it’s all about though y’all…you gotta think at least two steps ahead of the rest if you wanna make it in this business…and clearly, Juice has always had his head in the game, ready to battle.