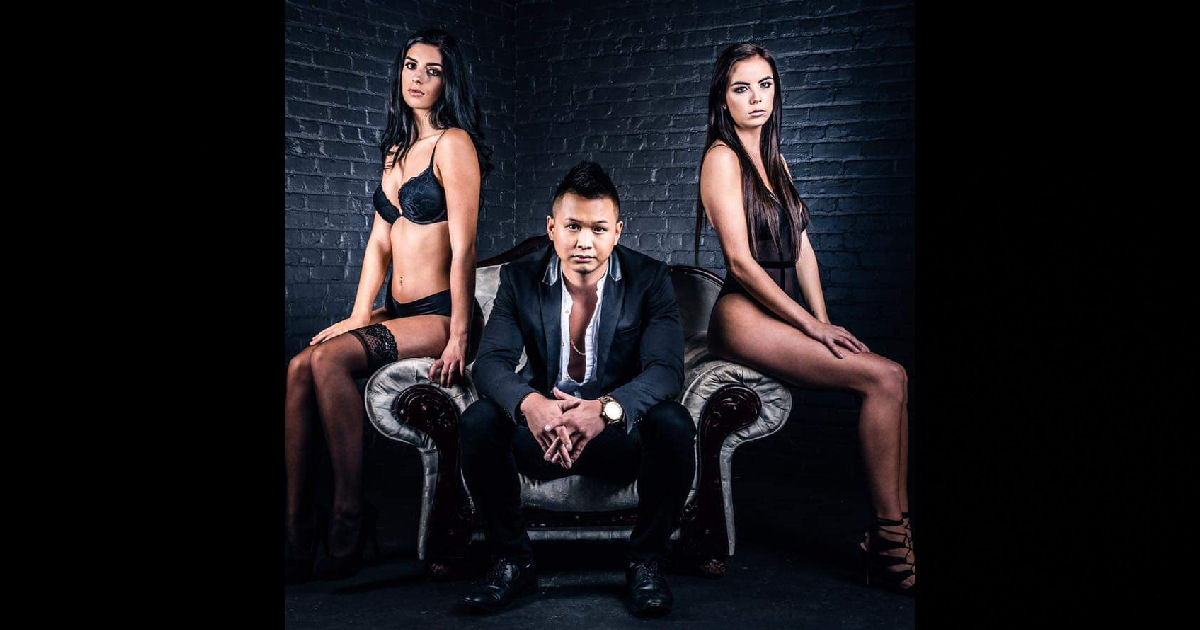 Alrighty…we got some modern-day R&B/Club in the house today with the music of JSY in the mix here at our pages.  In a handful of tracks, we’ve got a great sample of what the man is capable of; there’s two cuts from his 2017 album Love Drug and two of his latest singles from 2018 – let’s check these out.

Like all artists, you can hear the evolution of JSY in this short sample due to the fact these songs are coming from different points in time.  Quality, sound, & performance-wise – everything is remarkably consistent; whether it comes from his past record or the right here & now of 2018, JSY sings with confidence and excellent rhythm & tone – but I also think you can hear that growth between the two songs from last year & this one.  Taking these on chronologically time-wise, you can hear that club influence on the cuts from the Love Drug record right away on “Wuw” – and I gotta admit, this whole track is jammin’ in all the right ways.  What’s really impressive is what an impact JSY can make in all of less than two-minutes total!  “Wuw” has that vibe your ears are cravin,’ the entire mix on this track is freakin’ badass to listen to – it’s got an absolutely deadly sound that works the low-end bass rhythm for all the magic it’s worth & more.  JSY presents himself as a lover, not a fighter, right from the drop, keepin’ his eyes locked firmly on the ladies as he sings the words of “Wuw,” delivering a short & sexy cut that’s bound to raise an eyebrow or two for the content in the same direction as the volume knob heads – which is UP for the record homies, as it should be.  A track like “Wuw” is fully designed to be bumped loud & proud – and you’ll find that’s a staple of the JSY sound when it comes to his music overall as well.

Arguably, “Wuw” is probably the most surface-level cut of the four we’ve got; each of these other tracks continue to dig deeper into the heart of what this artist is really all about and further the story at work here in JSY.  Love Drug, as an album, obviously dives right into the mixed metaphor of its title and shows that relationship between the two elements, ‘love’ and ‘drugs’ in many ways both separately and how they also blend together pretty damn quickly in the haze of some really wild times described.  Earlier on in the record’s lineup, you’ll find “Beautiful Goodbye” – which is…generally speaking…an apology of sorts on wax, right there in the open for all to hear…a possible furture, or at least damn near what you’d call really close to an audible red flag whereby you wanna call someone out there to help JSY out, you feel me?  Rather than the uplifting vibe you’ll find in “Wuw,” “Beautiful Goodbye” goes fully dark into the downside of love and the effects it can have on a person’s mind, and ultimately their well-being as well.  Best way I can put it is…I mean…you almost HOPE that a song like “Beautiful Goodbye” isn’t based too much on personal experience, but at the same time, the depth of the emotions and raw feelings exposed here imply that there’s no way that it couldn’t be.  The main saving grace…that tip-off or hint that tells ya the main star of the show actually IS okay, is the professional level of control and the high standards of execution JSY has when it comes to his performance.  He might have to dig down into the pain to get the right energy & vibe out of himself on “Beautiful Goodbye,” but he’s also DOING all that with the focus of a real artist that knows exactly what he wants to get out of this moment.  So…I mean…that’s a GOOD thing…because with how dark “Beautiful Goodbye” gets, we need some sort of clue or direct message that the man behind the music IS actually alright after taking in an experience like this – and it’s those professional moves he makes on the mic that show you he’s completely in control, thankfully.  Facts are facts – some artists out there are capable of detailing the pain of love much more graphically than others – JSY proves he’s one of them here with this powerful track.  For those that have ever experienced the harshness of life without the love you want or when you want it – and many of you out there certainly have – the thoughts spit & sung by JSY are definitely all-too relatable & real; in many ways I felt like I’ve heard a lot of what he’s saying in “Beautiful Goodbye” bouncing around my own skull in relation to past loves of my own and I’m sure that effect is universal.  One way or the other, you’ll FEEL this track; it’d be impossible not to.  I ain’t gonna lie to ya – it’s literally so personal and dark that it’s straight-up scary…but I’ll take music that is this unafraid, bold, and expressive over any set of catchy hooks every day of the week and twice here on Sundays.  And that ain’t to say that “Beautiful Goodbye” doesn’t have great hooks, they’re subtle but highly effective here & they work for sure – all I’m saying is that compared to the average Pop song out there, you get so much more from JSY here on a personal level.  I think it’s always a good move to get this real in your music – “Beautiful Goodbye” is as bold as a song & theme can be inside of such a chill sound & slick performance on the vocals.  Loved the backing vocals that JSY supplied around the 3:20 mark as well…seems like a small & trivial comment after everything I’ve already said about this tune, but it was another highlight moment in the mix for sure.  And good lord…I mean, the guy’s got me searching for rainbows or sunshine of ANY kind after how deep & dark he’s willing to go and successfully does on “Beautiful Goodbye.”  Scary good.

That break in the clouds came through in the sweetness & sincerity of his latest material.  A track like “Styll” reveals that JSY is still struggling with love and the bottle, but that he’s indeed finding his way through it to the other side…or at least communicating the intentions of being that better man.  “Styll” deals with the push/pull of relationships & love…how things can seem to be over in one moment and the realization of just how long those feelings can last in the aftermath…how that can make you wonder if things are really even over at all.  Maybe you “Styll” feel something and you just had a bad run for a while or maybe it wasn’t the right time before somehow – this new single from JSY explores what could be; the theory that maybe that right time is now and starting over is what this particular love deserves.  Dude’s got a really excellent approach to his vocals that I really like a lot; he’s flashy for sure when it comes to the stylized sound & moves he makes – but he also proves that he can still get the sincerity across on a catchy song like “Styll” – and for me, that’s important as a listener.  In a track like “Beautiful Goodbye,” when he’s locked right into that moment and diving deep into the darkness…coming up with those gripping insights & real feelings can almost be a more natural process, at least in my opinion.  Finding that sincerity in more uplifting sounds & songs like he does on “Styll” is more of a challenge as an artist; essentially, JSY is making music that truly embraces the ability to connect to listeners on multiple levels.  The end result becomes a spirited, catchy, and hopeful energy in the atmosphere of “Styll” – like the audible sound of chance & possibility…the very idea that the love he’s seeking is still there on both sides and could potentially thrive like it never had the opportunity to do before.  All I can say is that I wish the guy good luck – I’ve done the make-up/break-up thing before and it definitely didn’t work out for me – hopefully it does for him and keeps him from coming to the ultimate conclusion of “Beautiful Goodbye” instead.  Compared to that, starting over would be a mighty fine idea, just sayin.’

Bottom line is we can start to hear that change in his mindset in between the album he’s released and the new singles he’s got out…or at least that’s my impression based on what I’m hearing here.  “Styll” opens that door of hope & possibility, and JSY will take those concepts into even brighter territory in the sound of “Worth It” to follow, which in many ways, might be the most accessible cut of the four.  It’s sweet piano-led vibe and subtle beat kickin’ with the surrounding melody in the music really works well and sets the mood for a lights-down-low moment on “Worth It.”  What I liked about this single is that, with the dialed-back energy & pace of the music here, you’d find many singers out there would have shrunk in the spotlight along with the sound – but JSY ends up going much bolder here, allowing his technique & tone to really jump right into the forefront and lead the way through this song.  He’s not timid here…that’s what I’m saying…he goes after this gentle melody with real power in his voice – some might call that the conviction of meaning and connection to the words he’s singing; I’d be one of them.  You can tell he believes in the words he’s singing – and again, as a listener, it’s things like this that matter most…above all things, that’s always what’s going to sell me on any song, whether or not you can hear that passion and straight-up desire to do this music thang tangibly in some way.  You can hear that JSY’s music means something to him…that these messages & words he writes are a reflection of the genuine thoughts in his head & heart, for better or for worse along the way, keeping it REAL like that.  I think the inviting melody of “Worth It” opens more doors for JSY…there’s great crossover potential in this cut that’ll appeal to a whole other side of his potential audience out there.  Vocally, he undoubtedly has highlights all over this final cut, because he’s going after this one with a decidedly different approach that really goes after some big moments.  And believe me, they are big…there’s a couple times where JSY ends up more on the fence for his tone around the three-minute mark where you’ll probably feel like they’ve gotten the better of him or at least challenged his vocals more than the previous cuts did.  So there is a bit of a trade-off when it comes to mixing a bold approach into such delicate territory – overall, I think JSY does a great job & delivers on the sweetness this song needed to reach its potential.

Dude puts a TON of thought and effort into these tunes he creates – and I’ve got a lot of respect for that; it can be flashy & catchy on the surface & in the hooks, but whenever you dig further into what’s being sung & said throughout these soulful songs, you’ll find those deeper meanings, feelings, and emotions that make JSY stand apart from the rest in all the right ways.