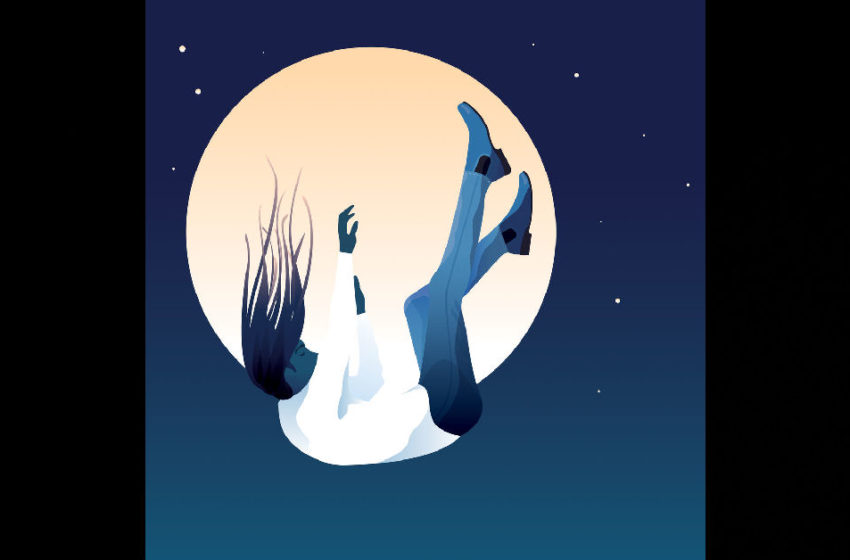 I really owe this man a beer.

That’s really the way 2019 went for me here at SBS, I ain’t gonna lie to ya, and I ain’t lyin’ to artist Jordan Paul either.  Believe it or not, when I’m behind on something it nags at me daily, even if I don’t get around to whatever it is for…*gulp…months.  So while it’s been way too long and I’m behind on reviewing his debut EP called Night Moon, and behind on personally apologizing for being so out of touch over the summer this year…you’ll all just have to take my word for it, I’ve thought about getting this out there pretty much daily.  He never got lost in the shuffle at all really – just so happened he had reached out when both my personal life & my beloved website all went to hell at the same damn time.

And for nearly…hmmm…six months, he’s sat on the backburner of my mind.  Part of the reason is because I knew he’d understand that I had to fix all the chaos before I could move forward, and the other part of it is because that’s what I was actually doing…it was all-hands on deck in 2019 to even keep SBS alive, & outside of the studio/website – just about everything else was equally crazy beyond normal.

Anyhow.  I’ll tell him the whole story one day over that beer I owe him.  Until that day JP, just know that you’re a champion for being as patient as you have, and that it’s been greatly appreciated my brother.  Especially considering he put out one of the most incredible singles of the year back in 2015 when I first heard him and reviewed his song “Archetype X” – and also considering he’s recently been interviewed by my own fam over there at Pacific Northwest Radio as well earlier this year.  I might be late to the party on Night Moon dear readers, dear friends…but I’ve finally arrived & I’m stoked to be here finally.

The point in telling you all any of this, is simply to say, that YES – I’ve actually been looking forward to hearing new music from Jordan Paul for quite some time now.  After a entire summer & fall of putting this place back together and finally now offering our services directly from our own site, I’ve got no excuses now…nor would I want any more holdups given JP’s level of awesomeness.  Let’s do this.

The absolutely smooth and intriguing opening of the EP’s title-track “Night Moon” is pretty much everything I was hoping to hear from Jordan Paul’s return right off the bat.  Don’t get me wrong – I went into this review knowing full well that topping my feelings about his previous single “Archetype X” would be a nearly impossible task, but I’m certainly enthusiastic about what I’m already hearing in the very first moments of “Night Moon.”  Not only is the man flexing brilliant ideas and impressive musicianship, tons of melody and engaging tones, but the hooks are strong as well.  I like that it has the distant sound in the vocals you’d find in say like, Alt-J or Beta Band’s music…tones and finesse in the guitars have the depth of Jonny Greenwood too – and that’s the kind of company you definitely wanna be compared to in my opinion.  I’d wager a guess that “Night Moon” would easily win the people listening over as the most all-around accessible track from this EP…there’s ultimately a whole bunch of reasons to dig on this cut.  The energy is there, the writing is solid, the performance from JP is bold, confident, & compelling – and you’ll find that the switch & transition between the verse and chorus of this track really pushes the degree of enticing sound to the next level you always hope to hear…that mythical second gear we always hope we’ll hear happen when a song makes its most serious shift in energy & direction.

Where “Night Moon” might stick more towards a script employed in what the people out there would certainly consider accessible, it’s the more artistically-inclined and innovative tracks that I know Paul is capable of that I was definitely hoping to hear – and that’s where a tune like “Rain” really shines.  Rooted in a combination of Indie/Blues…you could probably add Gospel/Folk/Rock into the whole assessment of what this hybrid song includes and you’d get no argument from me whatsoever.  “Rain” exposes the depth you’ll find in an artist like Jordan Paul and gives you a much better understanding of his overall capabilities when it comes to his creativity.  I have no doubt that the masses would more easily latch onto the hooks of “Night Moon” overall, but hopefully there are just as many people listening that appreciate the dimension and depth the different directions he takes on “Rain” and in “Gentle One” to follow.  I’m not always a massive fan of the one-word chorus…but I’ll admit, when it’s done right like this is, it works – JP puts a distinct amount of style & melody into the way he twists the title as he sings it, and that’s what makes “Rain” an engaging listen.  Smart moves like hearing the way it strips back to reveal the piano, how the vocals swell to become even bigger through the harmonies, or even the more noticeably theatrical style the music plays with overall…all these elements stack up to a fully impressive experience that you can clearly hear Jordan puts remarkable passion and soul into.

For myself personally, I think “Gentle One” takes the cake on this EP…it’s kind of like the best of both worlds presented in the strengths of the first two songs, yet once again revealed in a whole different style & sound.  Essentially, not only will you find the innovation and clever ideas in composition and structure that you’ll get from a song like “Rain,” but arguably, you’ll find the strongest hooks on the entire record when he wanders confidently into the chorus of “Gentle One.”  I mean…c’mon now people – that’s the kind of melody you’re always hoping to discover when you get out of bed in the morning and listen to something new, wouldn’t you say?  I know I would.  I also think that the poetic aspect of his lyricism reaches its most impressive heights here within the mellow confines of “Gentle One” as well; it’s a great mix of contrasting emotions that range from realistically objective to devastatingly heartbreaking – call me crazy if you like, but that’s the kind of clever combination that certainly grabs my attention.  I also think there’s a case to be made for “Gentle One” having the most versatile and charismatic sound of the three tunes in this set when it comes to the music, vocals, writing, structure, flow, and execution.  I can certainly recognize that in many ways, “Gentle One” is anti-typical in terms of what you’ll find out there in music today – but not when it comes to the underground scene and what’s bubbling up just below the surface of the mainstream…songs like this one show you just how much he’s got to contribute to the scene as an artist that has the confidence & capability to create songs that are genuinely unique.

So while I’m not 100% sure that these tunes are quite what “Archetype X” was for me personally at the end of the day – the songs of the Night Moon EP are far from any kind of step backwards either.  It’s a shift in direction, style, and sound…and ultimately one that works well in his favor; the songs are strong and the versatility you’ll find adds a whole lot more to his overall resume & catalog.  In my opinion, this record gets better and better as it plays through the set, with each cut topping what the last one offered by a noticeable degree or two, while still proving that each idea & song JP takes on has merit and a verifiable reason to exist – it’s all music well worth listening to.  The man writes and executes on a truly professional level – and the care & commitment he brings to his craft, and to his music, is radiantly abundant and entirely clear throughout the impressive moves he makes on the Night Moon EP.

Incidentally – Jordan Paul’s also got a single that’s come out since this release as well – it came out in October this year and it’s called “Ward’s Island” – in fact, on his main site, it’s connected right to the Night Moon EP.   Whether it’s a part of the official lineup or not, what I can tell ya, is that “Ward’s Island” is yet another solid cut from JP that highlights his Alt/Folk sound brilliantly.  It’s a track full of stunning imagery that’s as beautifully written as it is thought-provoking – and musically, at its most subtle moments, “Ward’s Island” makes its biggest impact on us.  The gentle sway and swing through the most delicate parts of this tune likely even outshine its more energetic parts – but make no mistake, JP’s got another well-constructed and unique idea crafted here that will pull you right into it.  The harmonies that become more present as the song plays on are highly effective – I love that we get an absolutely killer solo in this cut as well…astonishing tones really…wild and untamed in many ways, but in others, perfectly straddles the fringe of its bold ingenuity and what everyday listeners will be able to stick it out with.  In essence, he’s got a track in “Ward’s Island” that’s almost certain to please the musically-inclined, but one that’ll equally entertain the masses properly without leaving them behind.

Make sure to keep your eyes and ears on this guy – he’s clearly getting the momentum going strong, his material highlights his relentless creativity, and I’m willing to bet that he’s about to enter the best years of his career…you might even say that they’re already upon us right now.  Great job JP.

Find out more about Jordan Paul from his official homepage at:  https://www.jordanpaul.ca