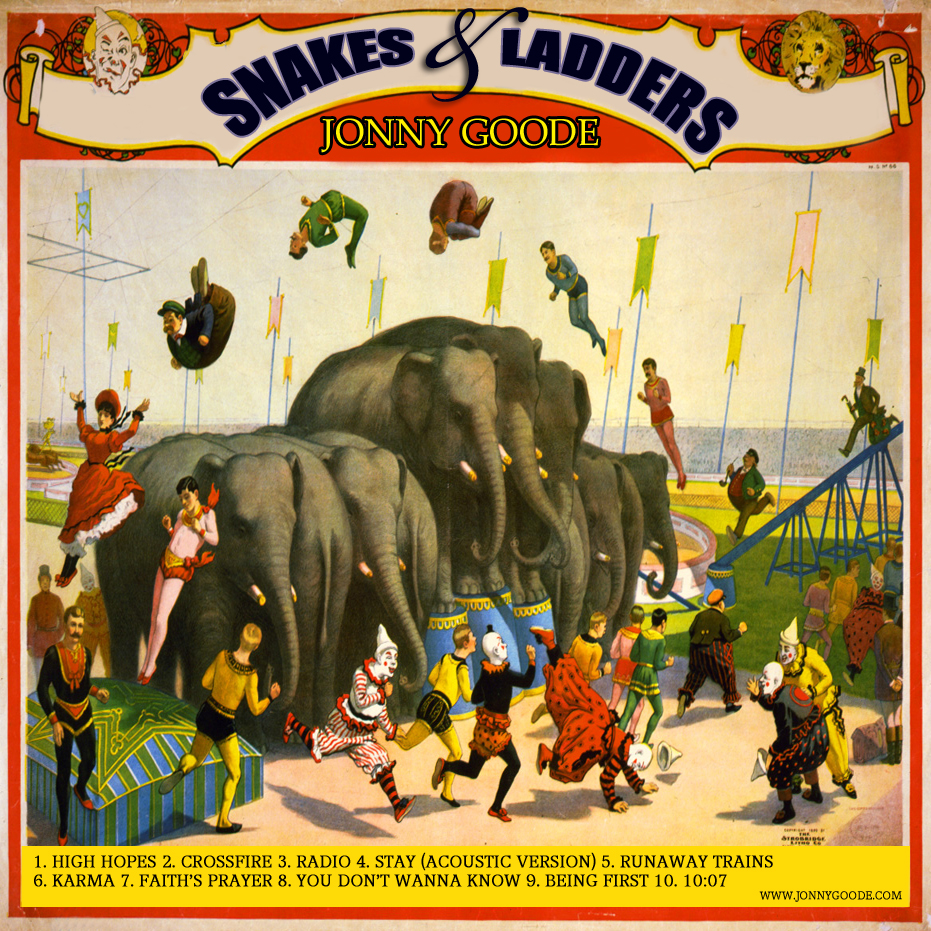 Like…seriously! Who put the sticker on this album? I’m definitely assuming this didn’t come from one of our people – not even one of our readers would have done this; but I’m actually looking at instructions that are more or less leading me towards certain songs – not the album as a whole! NOT gonna happen lol…though I certainly can’t blame the person in question for providing more direction to the indie-music journalism crowd out there – they certainly need the help!

So let’s talk about Snakes & Ladders by Jonny Goode…in its ENTIRETY. 🙂

There was definitely one piece of information in this note that caught my eye; it mentions that the music of Goode would appeal to fans of Ryan Adams, Gerry Rafferty and David Gray. Though I’ve often found Adams to be entirely overrated and under-accomplished and I’d profess to not have listened to nearly enough Rafferty in my lifetime, it’s definitely no secret on these pages that I love the music of David Gray…so let’s see if I can hear this in the music myself!

Snakes & Ladders opens with a tiny & delicate track called “High Hopes,” which, if you’re hearing this track like I am…you’ll end up with high hopes of your own for the rest of the album to follow as this is a tremendously fantastic way to open up this album. Goode reveals the signature style of which he’ll deliver his vocals; a mixture of sweetness & rasp that come out gorgeously on this first track and throughout the album to come. This for certain…is where the comparison to Adams is most likely coming from…and I’m cool to accept that as pretty damn accurate. It’s a clear tone and confident style that is projected with strong emotion and Goode provides it flawlessly track after track.

So to Goode…I say please…PLEASE – do NOT let all these kind words I expect you’ll receive go to your head like Adams has over his short career. Were it not for his overwhelming sense of entitlement – I’d be a much bigger fan…so I’m hoping that Goode can remain the humble & creative songwriter he is now for many, many years to come!

“Crossfire” is an excellent tune and really brings up the energy quickly into this album. That sweetness & rasp combo drips all over this tune and frequently reminds me of one of my own favorite singers in the UK band called Feeder. As he shifts into the dark & slow-groovin’ track called “Radio,” and sweetens up the chorus with his vibrant vocal-chords…I’m liking that comparison more and more as the track plays on. Feeder always had an imaginative way to find the pulse in a slower jam, and those were often my favorites on their albums; Goode displays that same mastery right here early on into the album in this track, the atmosphere is thick, rich and perfectly full. This track, despite already loving the two to play before it, moved Goode beyond possibly just getting lucky on the two beautiful opening tracks and into the ‘no, this guy is the real-deal’ category.

Gorgeous…there’s a word I’ve possibly overused myself…BUT…in case you’re wondering EXACTLY what I mean by that term, simply reference “Stay (Acoustic)” by Jonny Goode. That’s what I mean by gorgeous. What a song! It’s completely heartbreaking through the lyrics…the narrative tells the story of a man that is truly in love and watching the love of his life spend their time with another. But what makes it beautiful…is the emotional way he’s described his plight; the lyrics are fantastic. If there’s a person that this song is directed to…and they’ve heard it…and they HAVEN’T left their current partner to be by the side of Jonny Goode…well, I’m just saying if these words don’t convince this certain someone of just how devoted & unwavering his love really IS…then it’s just not meant to be! This feels like an amazingly personal song and story…there’s an authenticity in this track that makes me certain this is drawn from a real-life experience. I feel for the character presented in the story of this bittersweet song; again, this is a real heartbreaker, but what a fantastic song.

“Runaway Trains” shows the energetic pop-side of Goode’s style in this pumped up tune that has already been making waves as the lead single and video from Snakes & Ladders. It has a broad appeal and a quick & easy feel to the music with a beautiful vocal-melody. It’s a big song and certainly worthy of the attention it is continuing to garner from music fans in all corners of the globe.

It’s followed by a much-more niche-sounding track in “Karma,” whereas Goode leaves by the electric-energy of “Runaway Trains” in favor of a track led in interesting & creative directions through some intense musical-prowess. There’s some completely excellent guitar work in this subtle and slow-burning track that rises to its full-potential midway through into a tiny but excellent solo/break before descending into its melodious ending.

By contrast, the song to follow, “Faith’s Prayer,” is a piano-led, drum-intensive and absolutely incredible track. At this point, you have to tip your hat to Goode – he has certainly found a way to be impressive through the vocals in each and every track. But the way this track starts into its final minute…WOW. Just freakin WOW. Like, really – it can’t get any more emotionally convincing than his performance on this song…it’s incredible. If anything has had you doubting…you’ll stop all that noise right here and now in the explosive ending of this song, pick your jaw up off the floor…and apologize out loud.

You’ll get a bit more of the rock-side of Goode in the final three tracks in “You Don’t Wanna Know,” before heading into “Being First,” which I think is actually played entirely on a ukulele? Whatever that instrument is…it’s not only perfect for this quaint little tune – but Goode’s performance in this song will flat-out make you SMILE with your whole face. There are a few squeaks – good ones – that occur within the playful-rasp of his voice on this track that, if you’ve ever been in the studio-headset listening to a vocalist record…well…there’s no way you’d let him try again to outdo what clearly came out so perfectly genuine here on this song.

The final cut – “10:07,” is certainly unique, and extremely short…BUT…for those of you that would want to go further and really get into your music…something tells me you might be interested in trying to play this song in reverse as well…

What can I say? This album FLEW by, in all the greatest of ways. There’s energy, there’s melody, there’s style, confidence and tremendously respectable songwriting on Snakes & Ladders. Jonny Goode has put forth a veritable piece of pop-rock gold here on his new album with an entire set of heartfelt tunes that couldn’t possibly be ignored.

Find out more about Jonny Goode by checking out his official site at: www.jonnygoode.com