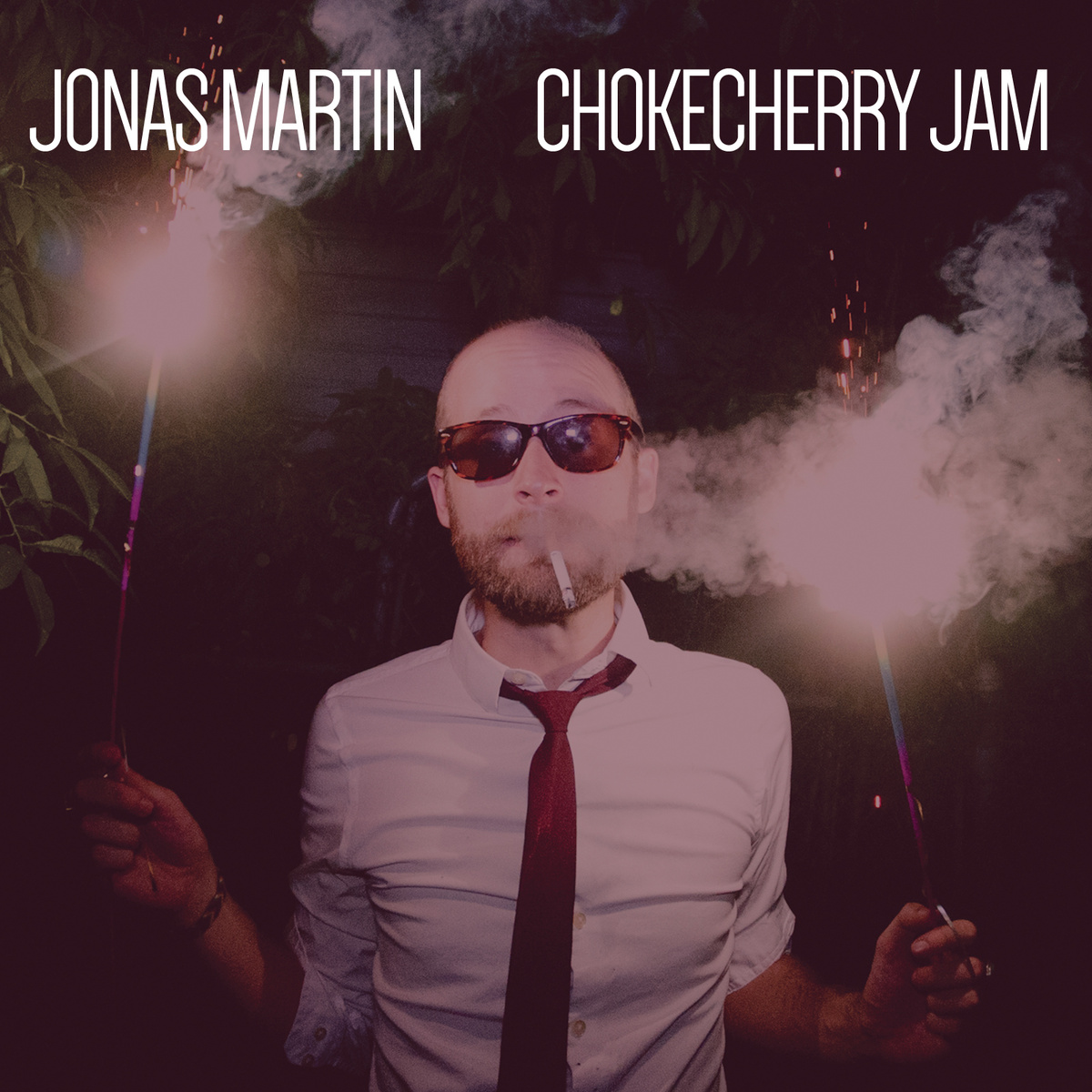 Jonas Martin has found a home here at sleepingbagstudios, his new album Chokecherry Jam is chockfull of precise musicianship played with real style & skill, innovation and undeniable passion for the craft. From everything I’ve read about Martin, he’d never be content to simply walk the path of others before him without leaving his own unmistakable footprints in the sand to let you know he’d been there in his own, ummm…’special’ way.

We’re not talking about ‘short-bus-special’ for the record…Jonas Martin is absolutely killing it on his first solo record. From moment one, this innovative artist starts out Chokecherry Jam with the bizarre sounds that make up the short “Preamble” intro into the album which, strange as it is, flows righteously smooth into the first full-song, “You’re So Blues.” This first track plays like a Jack White take on Colin James or the Brian Setzer Orchestra…you can hear the classic touch & feel that Martin has for his writing and his ability to modernize these sounds into his own style is nothing short of perfection.

From lyrics to music, this guy proves to be an exceptional talent as the album plays on. “You’re So Blues” is the first look & listen you get to experience the sarcastic nature of the lyrics of Jonas Martin as he riffs on love & life in this opening tune. Love the way this song opens with playful electro sounds and harmonies to break into the guitar & White-ish style ranting vocals…but…I mean…well…it’s well-known that I respect White more than I actually LIKE his music…and I kinda think when you hear an artist like Martin it becomes all the more clear to why that is…

Hey listen. When White gets it RIGHT, he’s a straight-up genius…but I don’t understand exactly WHY someone that skilled can take just as many shots extremely wide of the mark. You pick a band he’s been in or album he’s put out and I’ll show you an album that contains within: a handful of songs you’d never want to live without, a smattering of ideas gone wrong and a couple tracks that someone might even call LAZY. When you listen to the effort, precision and execution from the independent scene with Jonas Martin has made this album with, in a somewhat similar style…it kind of has to make a guy scratch his bearded chin and ponder why someone like White hasn’t been able to get it 100% right, despite what Rolling Stone might have thought back in the day.

Sorry Jonas…I know…I’m here to talk about you. But of course, you’ve mentioned on your pages that he’s an influence, and the comparisons can certainly be made in various spots throughout the album for sure…I’m not trying to bag on a hero of yours so much as trying to communicate I’d much rather listen to what you’re creating due to the captivating song-writing coupled with the flawless execution of it all.

Some people give their blood, sweat & tears to their music careers. With the excellent rhythm of “Autumn Love,” you can almost hear that Jonas has found a way to bring in the spirit of the actual BAND Blood, Sweat & Tears as well as his relentless dedication to his art. It starts out playfully, with a melody that’s reminiscent of “What Goes Up Must Come Down,” by the classic band before departing into a smart set of twists and turns, catchy rhythms and clever song-writing. Kind of like Blood, Sweat & Tears combined with Panic At The Disco!’s more Beatles-esque tunes off their second record. However your ears take this one in, no matter what you hear or what it reminds you of…I can guarantee they’ll be happy that you chose to stuff this sound into them.

If you made it this far through the album, you’ve already got great taste in music…but if you make it to “Wake Up,” it’s game-over for you or any set of ears that hear it. This…hmm…how do I say it…

This is as good as rock can possibly get isn’t it?

Explosive when it needs to be, spacious when it’s not – “Wake Up” is an absolutely perfected rock-song. By far some of my favourite lyrics on the album, everything about this song works massively well for Jonas Martin and the tremendous team of talented musicians that surround him on Chokecherry Jam. The distortion on the main vocals is nothing short of audio-GOLD, but it’s truly his confidence & style in his performance that draws you in. I mean, that’s official SWAGGER in this song…it has that loose-feel to it all but man – this album is so well-executed & well-played that it will curly-cue your pubes in excitement! “Wake Up” is pretty much everything I dig in real-rock and accompanied by instrumentation that truly makes itself known as each player takes a real turn in the spotlight to shine.

That’s who it is! Jeez I had to fish out that name from the back of my mind…but the singer Jonas is reminding me of most on the following cut “Gabby Gasoline” is actually Damon Johnson…some of you will remember him from the band Brother Cane, or perhaps his later work in Slave To The System. Supremely talented guitarist and singer – Jonas Martin is already conjuring up comparisons to some of the best of the best out there…people like Jack White of course already mentioned and The Black Keys will certainly also spring to mind at times throughout Chokecherry Jam. This guy is keeping great company…and if Jonas continues to play his cards this well, he’ll not only be compared to fantastic mainstreamers – he’ll be sitting on the same late-night couches and hitting the same stages. I dig the slow-groove of “Gabby Gasoline” and its stylistic approach to vocals…excellent keyboard support, great bass & drums as well…and of course, a super-rad-ass guitar solo. Simple…I get the idea that Martin could easily take this all for an epic showboat ride, and you’ll hear more of a challenging solo as this song plays to the end – but the point is that he never overdoes it. Not to bring up White only to beat on him slightly once more…but again I think the difference in Jonas Martin’s music makes itself known; he pushes right to the borders of ideas, sounds and innovation…and it might have a casual, loose, relentless rock-based attitude…but the control and precision are completely masterful.

This album does get a little lighter with “Gabby Gasoline” and “Jodie Lever” taking place after the rock perfection of “Wake Up,” but it proves to be cool in different ways. “Jodie Lever” again shows the excellent aspect of the lyrics from Martin…this is an incredible story told extremely well. I’m not one to usually pull quotes out direct, but the line “But when I ask her, ‘Jodie, tell me a tale.’ She says, ‘Son, why don’t you just go out and make one yourself?’” – I mean…it’s pure genius and the line itself is delivered with impact right before heading back into the catchy chorus of “Jodie Lever.” The piano-solo is chaotic jazz-genius and the additional saxophone sounds are just freakin’ GOLDEN…it’s a massive song by the time it finds its ending.

That jazzy vibe finds a classic funk groove and marries itself together solidly in “Fishy Man.” I love the added sonic-textures to this song…it’s almost like a tune underwater! The chorus is completely awesome…waaaaaaaaay too short but impossible not to love. Once again, standout bass performance and incredible guitar solos…by the end of “Fishy Man,” you’re caught up in the net of one incredible jam that really encapsulates great aspects of classic psychedelic-rock & funk. It ends with a smart assembly of static & chaotic-melody…and breaks way perfectly for “Apple Peelings.”

Brace yourselves…because this album started strongly…but the end of the Chokecherry Jam album from Jonas Martin absolutely continues to raise its game towards the end. With a clever layout, his new set of solo-songs really does a great job of mixing up his sound subtly from track to track and plays smoothly throughout its transitions from song to song. “Apple Peelings,” is perhaps one of the lower-key tunes on the album in terms of energy…but as you head into the third-and-a-half minute, you’ll realize that this guy never puts in anything less than 100%. The emotion, power & passion in Martin’s performances will always reflect the true raw connection he has to his art; music is a powerful entity inside him not to be contained, and creativity probably keeps him awake at night.

What “Apple Peelings” does best, as much as I might like the song…is set up the following track “No Wonder” to make the dramatic impact that this song deserves. I’d honestly put “No Wonder” in the top-ten songs I’ve heard so far this year…this is an absolute vision in music brought flawlessly to life. The guitar sounds are unbelievable; massive crashing waves of distorted sounds play alongside the huge drums and drift into incomparable melodies. Martin’s vocals are at an absolute high-point here on “No Wonder,” with an unforgettably emotional performance and completely catchy flow. Hands down, it’s one of the best songs on what is already an unforgettable album…I could listen to this song for the rest of the year. It’s audibly hypnotic with its vocal rhythms; melancholy, self-reflective…it’s just superb.

It’s true entertainment…that’s exactly what Chokecherry Jam really is. From beginning to end, this album provides highlight moment after highlight moment, and the final cut “Where Did It Go” simply confirms the cohesion in Martin’s work once again as it subtly shifts, twists and morphs into absolute rock-chaos by the end of its five-minute run. It’s kind of like when you go to a restaurant and you love the menu but can’t decide what to eat so you get that awesome sampler thingy that has a bit of everything you love on it…that’s what “Where Did It Go” is. And…AND…he brought back the FAKE ENDING! Oh man! It’s been YEARS! But who doesn’t love one of music’s best twists on the album itself when you hear more sound come out after you thought it was all said & done? That’s right – we ALL love it…and with one epic final burst of music and modern-day-meets-old-school-innovation, Jonas Martin ends Chokecherry Jam in true style.

I’d go as far as to say this album would be pretty much impossible to resist. The depth of skill from Martin himself in addition to the incredible supporting cast of talent playing on the songs and assisting in its production is such an immaculate assembly it makes you want to stand up and cheer. There’s a truly gifted musician and song-writer in Jonas Martin…but more importantly an artist that truly knows exactly how to bring his songs screaming vibrantly to bright & beautiful rock-infused reality.

Find out more about Jonas Martin at: 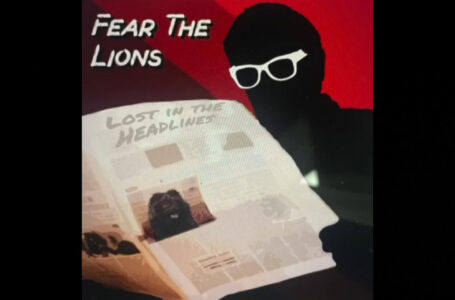