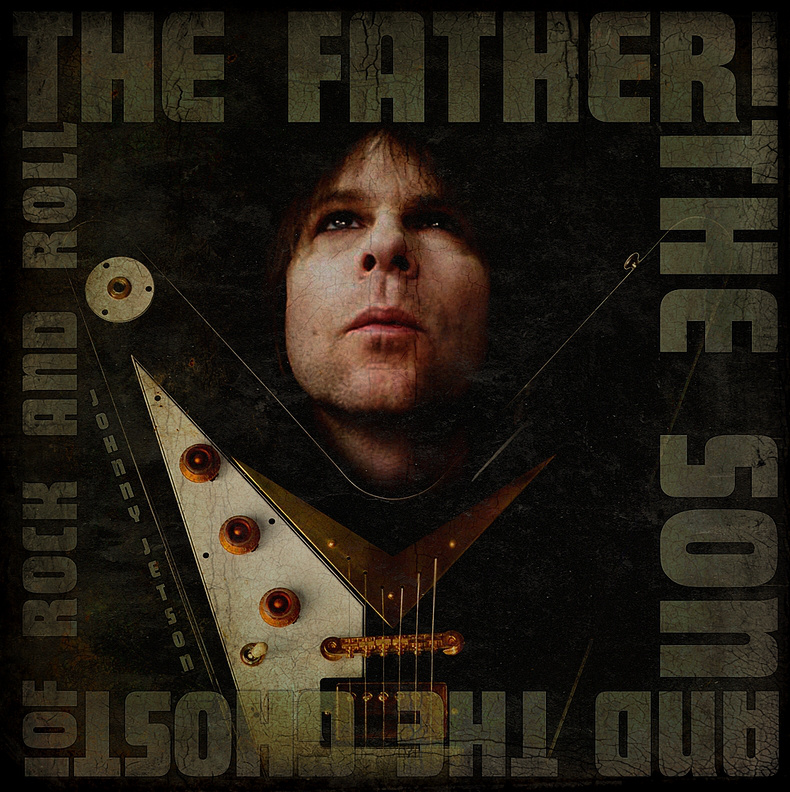 Much of me likes to think if I was to ever take my own music in a more pop/rock direction that I’d end up with something that resembles the music here on Johnny Jetson’s new album The Father The Song And The Ghost Of Rock And Roll. There’s classic elements of rock from the 70’s, 80’s and 90’s accompanied by the timeless-style melodies that were the basis for some of the most incredible crossover bands and hits we’ve seen in our lifetimes. Combined with a true-commitment here in production – this album sounds like a clever throwback to a time when rock was simply about enjoying the music, being together and rocking-the-fuck-out; back when we weren’t worried about the charts so much as just making that new single and holding it in our hands proudly, hot off the press.

It starts out with “Behind The Sun,” which is almost like a combination of David Bowie’s ambition and Limblifter’s amplifiers. From this opener you can deduce much of the sound to follow as the guitar-based beginning takes a minute or two to find itself in a real stride; it’s a churner…it grinds along until the guitar solo comes to break up the grind with some excellent tones. As it shreds through to the end, combined with the extra-tin in the production, this song goes a long way to demonstrate a real ‘live’ feeling; and so too does the album.

“Black And Blue For Your Love,” is another excellent guitar-driven tune. This grind I was referring to…it’s very similar to what you know and love from Queens Of The Stone Age, or if you know your underground well enough, bands like Limblifter or the even lesser-known indie-band known as The Switches. In any event…aside from the stark difference in production, which might be treble-driven yes, it’s that churn & grind of the guitars that make these songs work as well as they do in the style they’re presented in; the bass is there for sure, but the absence of low-end make this album sound true to the era of rock’s golden-age.

The sounds of pop begin to infiltrate the album and the rock of Johnny Jetson more noticeably on “Driving Is The Only Way To Fly,” which uses a clever set of vocals and lyrics to work its charm & magic, and also on “The Night Will Come.” On all of these tracks so far, I’ve been impressed with the writing and how it’s all coming together for this solo-effort…that much is certain. I’m not always convinced I’m getting the maximum in energy from lead-vocals of Johnny Jetson; his tone is always successful and perfectly form-fitting to the song…but there are moments where I’m finding I’m almost expecting him to rise to a more dynamic height. I feel like we’ve got a singer here that might not yet have cut himself fully loose on the mic; but I could be completely wrong, this could very well be the intended sound for Jetson. It’s not complete pop-lethargy, there’s still enough energy in there for 90% of these songs…but I’m listening for the passion in the vocals and it’s a little amiss in comparison to his excellent ideas and delivery on guitar.

And again, to Johnny’s credit, I’ve loved the actual sound and tone of his vocals the entire way through. You might hear what I hear; middle-album tracks like “Tell Me What I Want To Hear Tonight,” and “Tonight Will Always Be (The Night You Die With Me)” might have both benefitted from a slightly more emotionally-committed performance…one that lets us know he feels & believes in these songs just as much as he does sing them with perfect tone. The writing, the playing, the sound…it’s all there if you ask me; the hazy-vocals might personally work for me but they might not for all…I’m just the messenger…

“It Could Have Been Love,” is another song that I think shows the promise of something even more. It’s also led me initially to believe this was a live-off-the-floor recording…something about this one seemed thicker…stronger…badder…bigger! Great melody line here in the vocal department, catchy hooks and the tone again is completely right on. As the energy has come up in the music, I’m once again expecting Johnny to ramp it up on the mic to match the intensity here…he’s so completely CAPABLE it’s beginning to hurt my feelings! The guy knows tone, clearly. Through the guitars alone and the awesome solo-break in this particular track…you can hear this is the kind of guy that would only make a mistake if he actually wanted to.

It stays with a stronger, richer sound as the album flows into “Save Me From Myself,” which is almost like the song The Beatles would have created if they invaded the U.S. during the late 90’s or early 2000’s. Big, big guitars here – absolutely incredible ideas around the two-minute mark.

Listen to the confidence displayed through Johnny’s guitar. Now listen to the confidence in the vocals. Am I wrong in thinking he’s slightly holding back on one and letting it rip in full on the other? I don’t really think that I am – you can hear it mix-wise as well with Johnny well in-behind these guitar-laden songs. But here’s the REAL bone I’ve got to pick with this clearly-excellent song-writer and musician; why ISN’T he displaying that confidence and passion through the vocals when he ABSOLUTELY has the right voice and sound to carry these exceptional melodies. Am I nuts here?

I think “You’re Not The Only One,” was about as close as I felt like we got to Jetson-unchained…but even that song has a similar mix to what you’d find on a Strokes album where the vocals are set behind the music. It does wonders for the song’s overall capacity; any time you record like that it tends to make the songs sound much larger than they might when those vocals are upfront in the mix. If it sounds like I’m being tough on double-J here, it’s only born out of the full-confidence I have in his vocals; I can hear that he has the right tone, melody and sound to bring himself up further to really help drive these songs forward as intensely as he does with guitar. And again – didn’t I open up this review mentioning I’d love to think I could pull this off myself? Believe me…I AM a fan of Johnny’s sound. He’s been around for a while with his band Tattooed Millionaires, but we do have to consider that this is the first time he’s put out a complete solo-record on his one. I mean, there is but ONE track where he receives any help on instrumentally, with Johnny Strutt filling in the drums on “Save Me From Myself” – and other than that, EVERYTHING you’ve heard came from the heart, hands and mind of Johnny Jetson. Take a moment and think about all you experienced on The Father The Son And The Ghost Of Rock And Roll…it’s even more impressive when you consider it’s all come from the talents of one man on his quest to rock and/or roll.

In a final display of fireworks…”The Day The Earth Came Down,” is perhaps an example of Johnny at his most focused. With the microphone put away, this instrumental track is another massive highlight on his abilities to write, perform and create fantastically on the guitar alone. Truly beautiful in every possible way – this track is an astounding send-off to an impressive album full of great ideas. Fully realized here on this final cut “The Day The Earth Came Down,” Johnny Jetson has certainly proven himself to be an excellent song-writer and performer with real-ideas presented in an old-school style. They work extremely well now; and I’m positive his talent and skill will only continue to impress over time and future-releases of his creative twists & combinations of pop/rock.

Tags: Album Johnny Jetson sleepingbagstudios The Father The Son And The Ghost Of Rock And Roll