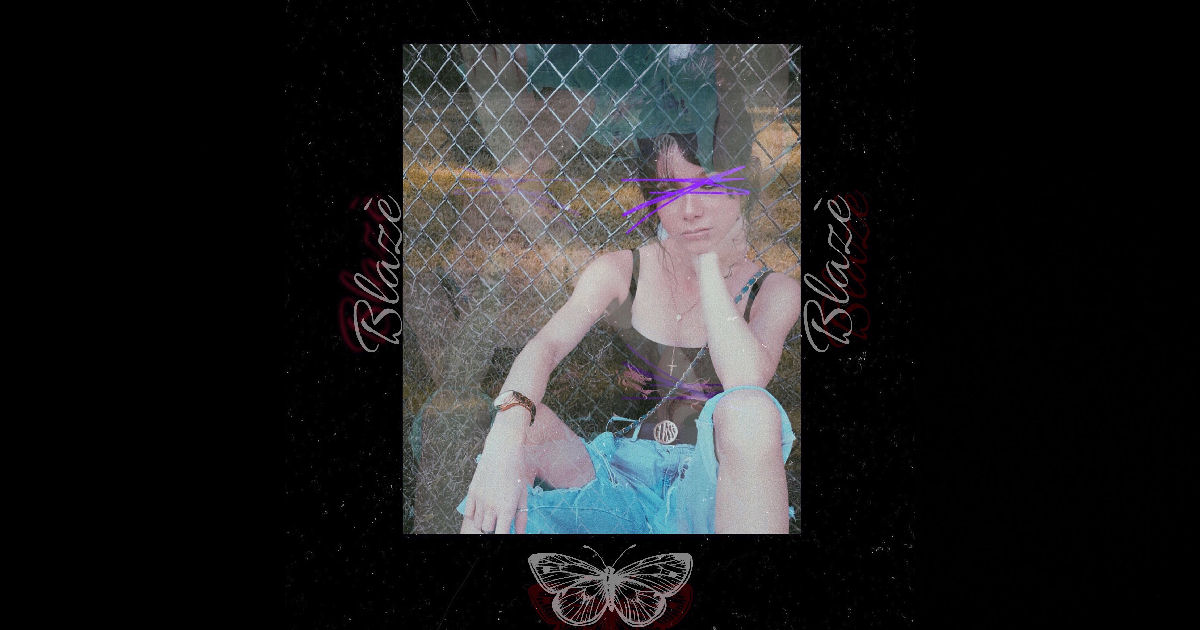 This dude could slide right into Bone Thugs N Harmony and get away with a ton of bars before they even noticed they had a new member on the mic, you feel me?  Joe Gang mixes rhymes & melody really well, not limiting himself to being pinned down as a full-on rapper or singer, but putting that hybrid talent on display that should give him a ton of advantages in crossing over to multiple sets of speakers out there.

“Feeling Me” opens up the Blazè EP and the set of three cuts you’ll find on it, and it ultimately reveals a lot about Joe Gang that you’ll be able to bank on comin’ at ya throughout the other two songs to follow.  First and foremost – as any singer or rapper will likely tell ya…not too much that can be done on the mic without the right beat or vibe to set it all off – so for real, credit where credit is due, the music on “Feeling Me” is immediately enticing and you’ll find that’s the case throughout this whole set.  Right from the drop in the editing on the intro, to the violins soaring alongside the low-end bass rumbling through…things sound interesting right from the get-go and Joe’s clearly made sure to use cuts that are going to stand out in a memorable way – he’s chosen wisely.  “Feeling Me” works with brilliant textures in the music, keeping it seriously entertaining while remarkably chill, smooth, and slick on the surface.  He’s working with really defined melody-lines and keeps that flow in-check & tone on-point, which keeps him in the safe-zone, but also keeps everything we’re hearing on this cut make an impact too.  No real complaints from me here…I think the softer-energy in the approach always makes it harder for a single to stand out or for the listeners out there to truly get amped-up over, but I do think there’s a ton of value in the balance between the strengths of the music & on the mic here plenty worth listening to.

The title-track “Blazè” comes in with the hooks & melody on display right from the drop – again, consider that Bone Thugs comparison I made earlier on and check out this cut…you’ll hear it.  Joe even spits it to you straight in what’s basically a confirmation of this whole theory when he says ‘I don’t even rap, I sing’ – he’s right.  You can call it rap if you like, but for those that know their music inside & out and know the distinct differences between Hip-Hop, Rap, or R&B-infused vibes like this song has, you’ll know there’s uniqueness that separates these styles from each other.  Joe keeps it professionally controlled, smooth, and melodic as he’s singing “Blazè” – and even though some of the words can definitely take him into tougher terrain subject & theme-wise, you’ll still feel that comforting vibe that a track like this pumps out.  Again, great choice of the music to set the mood & atmosphere for Joe to lay out his thoughts…and he drifts in & out of them smartly here in a reflection of where things are at & where they’re goin’ for him in life…what’s in his control, and maybe what’s not as well.  An objective tale of life & love…it is how it is, as they say – Joe keeps it real on the mic in the words of “Blazè” and takes the words deep here, but still keeps it more than entertaining enough for the rest of us without getting lost too far inside his thoughts for us to keep up.  He’ll go to some seriously dark places on “Blazè” – there’s no doubt about that, he’ll confront his darkest demons and even suicidal thoughts – hell, maybe even homicidal thoughts – there’s a LOT to unpack in what’s being said on this cut; all ya can hope for is that the man is finding his way through it all.  Like I always like to say and hope is true, when you can hear an artist confronting their pain or struggles this directly, it serves a purpose – it can become important on a therapeutic level even…and it’s the fact that they’re still there fighting it, creating art in the process…well…hopefully that’s the kind of indication that things are gonna keep on working out.

Note the title of this EP…make sure you’re reading that right because it really does dictate the mood & atmosphere hanging in the air on the songs from this record.  Joe’s feeling Blazè – and in many respects, you can hear that in the chilled-out way that he approaches the mic.  There are going to be moments where you’ll wish there was a bit of spark to liven him up a bit – can’t lie to the man there; I think of a song like the final cut “Never End” and how similar you might find the writing & hooks to say something like, Wiz Khalifa when he’s kickin’ it laid-back…but where the difference comes in between an artist like Joe and Wiz is that additional expressionism.  For me, that’s the place where I’d be willing to bet that we’ll hear Joe continue to evolve at the most rapid pace over the years to follow.  Right now as it stands, each of these three songs have their own particular vibe, flow, pace, gear, tone, and approach – but once it’s locked in, it’s locked in – and Joe won’t deviate much if at all from there.  The results become one of two things to listeners; it’s either a massive win because the entire cut stays cohesive & strong, or it can become too much of a good thing real quickly…and I think Joe will need to recognize the risk there.  You can still hit the melody you want and provide variation in the energy of the flow as well – right now the dude is beyond chill…the writing & hooks are more than strong enough to pull you in, but he’s going to have to make that choice in the future if he wants to add more dynamics and range to his material.  Which he might, but he also might-not…and I could understand both directions.  I think what I’ve recommended potentially opens a few more doors for him creatively and personally as an artist with a gift of expression – but when you consider the fact that the game-plan for these three tracks follows a similar playbook, you have to also acknowledge that this may be the signature style at work.  And I mean, if that’s the case, there’s no doubt that Joe Gang has succeeded in that sense – I feel like each of these three cuts really fit together and did a ton to establish his identity & sound on the mic – like I’m sure I’d have no problem picking out Joe’s music from a playlist blind just by hearing the way that he delivers his vocals.  That can’t be underestimated…identity isn’t an easy thing to establish in a short setting like an EP…so make no mistake, there’s a ton of merit to the way that Joe has remained so stoic within the sound, style, and subjects he’s singing on in each individual song.  With the smart choices he’s made in which beats & music to sing/rap over top of, that’s where the real cohesion between the songs comes in to complement the overall style of his flow even more to make Gang’s music highly recognizable.  I felt like he’s saved his best for the end here – the music on “Never End” is killer, mixing powerful low-end with bright piano and sonic elements sprinkled into the sound – and Joe keeps his flow as on-point as ever, rolling through the bars with subtle-but-confident sound.  Maybe even arguably letting us in on what’s a bit more of a personal cut too…there’s something in the lyrics and in the air when “Never End” plays that feels like you get a clearer glimpse of the artist at work than the other two cuts do, which is of course, a great place to leave us that’s what’ll have us coming back for more yo.  Highly effective hooks and a truly sincere sound send us out of this record supremely satisfied.