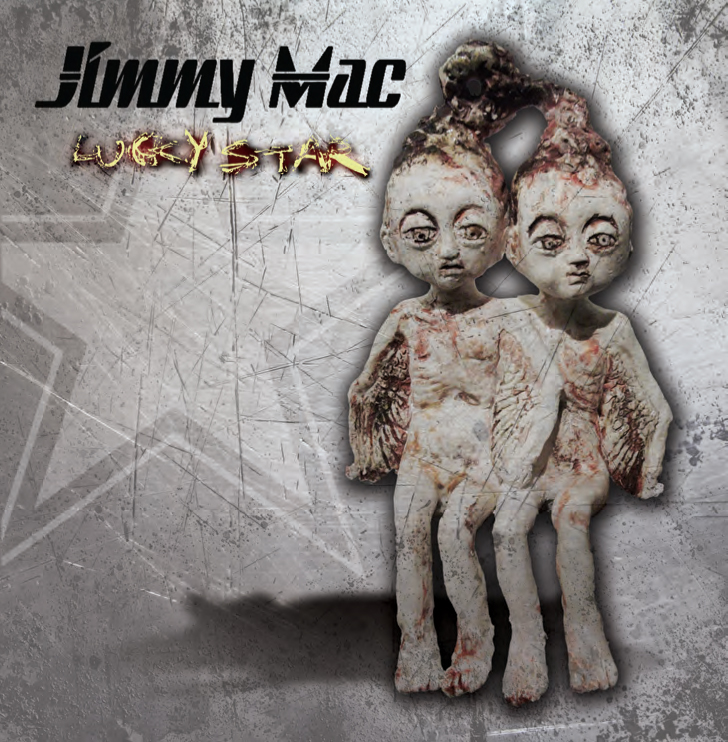 Immediately in my first listen I can hear a strong songwriter right off the bat. Between the opening and title track “Lucky Star” and “Happily Wasted” I’m already convinced that Jimmy Mac has a complete gift for writing a song and a powerful hook. These two songs certainly display that element, but they hit me in two completely separate ways. Let me explain…

“Lucky Star” is an interesting track to me for several reasons. Title tracks in general always are to me. In theory, whether it’s track one or track eight – if it’s the TITLE track, it’s the “centerpiece” of the album…the crown jewel…the proudest moment. To me – after a firm listen to this album on repeat – I found that “Lucky Star” was more of a jumping off point, rather than a centerpiece as I thought the content on this album as well as the performances became stronger as the album played on.

That’s not to say it’s a bad song – it’s the complete opposite. It actually doesn’t matter what song you choose off this album, they all display a completely gifted songwriter. But with “Lucky Star” the song, I found a blending of sound that I suppose maybe I wasn’t expecting. It was like the lead singer for the band Cold had gone and joined a blues band for a second. Much like the lead singer for Cold, Jimmy lethargically and hazily sings this track against a contrasting sound to really create a unique opening, almost deceptive…

Because immediately in the following track “Happily Wasted” you get a much better sense of what Jimmy Mac is capable of. The pop sensibilities on this album showcased in songs like this, or later in “Lazy” are a far distance from the opening track. And Jimmy…I’m talking to you directly now…you KNOW you can hear it too. Listen to the ENERGY and the LIFE you’ve got in your performance on “Lazy” (LOL, of all tracks!) and you can hear quite easily this is your comfort zone for sure.

I’m not sure if anyone does this when listening to an album…but I do; when I can hear so quickly that I’m hearing an amazing songwriter, I don’t always expect a cohesive album. I do expect amazing song after song, but not always connected in sound itself as these people tend to focus on the moment rather than the grand assembly at the end. Cohesive albums are also the result of bands and writers that have millions of songs in the vault to pull from, and even in that instance they still have to stand the test of time and still be relevant to have that feeling of togetherness. While I’m not all that convinced that this particular group of songs on Lucky Star all tie in together – there’s no disputing that each and every one of the songs that make up this album are brilliantly written as separate entities.

Listening to “Sweet Nothings,” deep in the middle of the Lucky Star, I am literally continually blown away by the ability this guy has to write a hook. “Suckers,” another great example, is an explosive track with wicked vocal effects and a driven determination to not let the middle of the album sag. Written in a familiar style, much like Gavin Rossdale of Bush and something you can also find in the song “Fly.” Jimmy Mac has learned an incredible amount from his 90’s predecessors and really knows how to get the most out of each and every song.

“Boy And A Girl,” this is an all-kinds-of-interesting track for me. Part Three Doors Down, part Silverchair and part blues-rock – this track walks a fine, fine line for Jimmy Mac. I advise extreme caution here Jimmy! There’s no disputing that this track is a hit song – again, I truly believe anything you’ve written can be off this album – but this particular track could catch fire with the bar crowd easily. I’m just saying…if they love this and want MORE of it from you – you might get pulled into that! And though again, it sounds comfortable and well-written, the majority of the album is different in sound…you don’t want to get locked into something permanently!

But perhaps therein lies the theme of the album, and also of the “songwriter” in general. Thematically, the albums range so far between the extremes because they’ll never want to be locked down. If that’s the case, I applaud you all – you as well Jimmy Mac!

The album closes on a pop note with “Happy Forever,” another song that could easily be heard on the radio station anywhere in your town with a remix happily fitting into any of the station’s formats. It also has another shot at the “Lucky Star” track with an acoustic/strings rendition. Does it succeed? In a couple of ways…

The first being that the music works a little better with the vocals and the song seems to gel a little better in this style. The strings are absolutely beautiful – and just like in the original, there is a bridge in this song where Jimmy breaks free of the hazy vocals and really lets loose at his full 100%.

The second way is that it truly serves as the other “piece of bread” on this album. And just like a great sandwich – what’s between the bread is everything you’re craving, but the bread’s still good too! There’s an incredible amount of talent on display from Jimmy Mac on Lucky Star – you rock fans will definitely be big fans of this.

Check out Jimmy Mac’s new album on soundcloud at: https://soundcloud.com/jimmy-mac-6