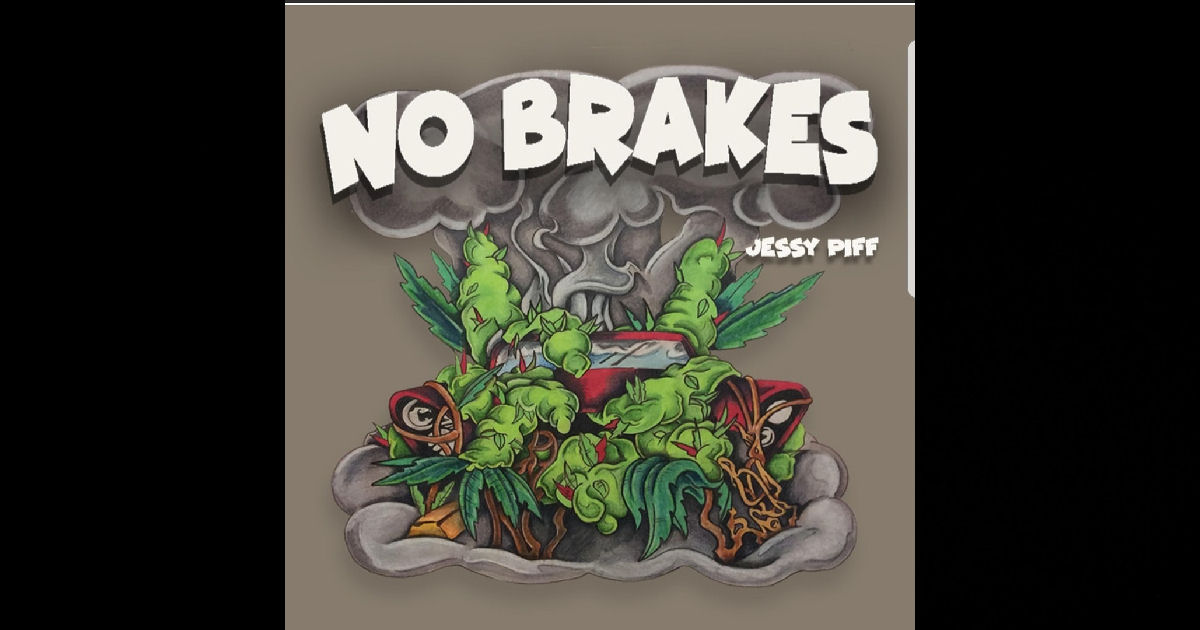 “I get lifted, I won’t come down, blunts get twisted, blow my lungs out.”  #HeardYo.

The man’s ‘about to hit 30 years old’ – all I know is that if my lungs can hold up for nearly a full decade past that, his can too.  It’s all about conditioning homie, you got this.

I have the feeling this emcee will be keepin’ it lit for a long, long time to come…dudes like Jessy Piff don’t just surrender the talent they’ve got easily or just hang up the spurs all of a sudden, ya feel me?  I’d be rappin’ til I hit the century mark if I could spit like this guy or write the lines he’s coming up with.

One of the first things that any writer’s workshop will teach ya is actually some pretty good advice – and that’s to write about what you know.  I stay in my lane in that respect – I write about music…which is…well…probably the only thing I know anything about at all.  But it applies to music too – I’m sure I’ve pointed this out on these pages in the past, but it’s a seriously important part of what makes a song believable.  I hear bangers all day long about murderin’ this bitch or thuggin’ up that bitch etc. etc. – and 99% of the time, I can hear the thoughts in my head tellin’ me that everything I’m hearing comes from people that haven’t really lived that life, know what I mean?  So believe me, you’ll hear that disconnect when someone’s not staying in their lane, every time.  That being said, the opposite effect is equally true – when someone’s really lived what they’re singing or rappin’ about, you can tell – because they feel it – you can HEAR that in the music/words of any artist or band if they truly do…just like these cuts here.

Joined by Cam Brov and tayte the Technician on “Holy Smoke” – this is where I got my first impression of what Jessy Piff brings to the mic and what he rhymes about – and I’ll be damned if we don’t have a TON in common!  In between clouds of smoke between me and the monitor here, I’ll try to manage to type out a few words to describe what I’m hearing on this collaborative effort…let’s see what comes out.  No doubt they’ve got a solid cut overall, each player on the mic & in the mix brings something to “Holy Smoke” that it couldn’t thrive without having it in there – so props to that.  Lyrically, you’ll hear these guys are all on-point, bringing rhythmic bars and powerful lines that provide ya with dope imagery you can practically roll up & smoke it’s so real.  Hooks are strong and the chorus suits the vibe, the verses continually stand out as the main reason you’ll come back to this cut – these emcees come out swinging BIG y’all – massive doses of confidence & precision on the m-i-c that your ears are certain to appreciate.  Thematically, of course I’m all over this…it’s all about the greenery on “Holy Smoke” and I can definitely dig the perspective they’ve got on this subject & support the amount of consumption clearly taking place on their side of the screen over there taking place wherever Jessy & his crew are at.  Highlight moment?  Absolutely – the lyrics on the bars that start right around the fifty-five second mark – that’s genius in action right there and a great way to pull us into this cut with smart choices in the imagery that’ll bring a smile to your mug and 100% describe exactly what they wanna say at the same time.  And trust me, it don’t stop there y’all – LISTEN to these bars, because you’ll find that line after line, they’re bringing seriously well written shit that hits the mark spot-on thematically.  They might be faded, they might be lifted – but make no mistake, when it comes to the studio time, they’re also focused as fuck.

Ohhhhhhh I get it.  One song ain’t enough for ya eh?  You say you need further proof?  How about “Nightcap” then?  Straight-up, this is lyrically KILLER from beginning to end – and I guarantee you’re gonna bust out a laugh or two along the way throughout these wild tales being spit on the mic.  EVERYTHING is fuckin’ fantastic here – I mean, this is as explicit as a track can pretty much be, so don’t get me wrong, the options for places out there playin’ this cut are next to zero in that sense – but when it comes to the playlists of the people out there you’re gonna find this wild vibe at the TOP.  Even the picture that comes with this single at Spotify cracks me up…that’s a couple of red-eyed mofos right there is what that is…but believe me, once again, you’ll find it completely fits the vibe & atmosphere at work.  This time Jessy is joined by the skills of Sam Comfort on the mic, and together they trade stories about sexually-charged tales of debauchery and wild times between the sheets from their recent nights out on separate missions to conquest dat booty.  Lyrically, again, these emcees just create absolutely KILLER material that seriously holds up – REAL HIP-HOP at work here, you feel me?  You can say what ya want about what they choose to rap about – but damn if these guys don’t flex serious style & finesse on the mic, adding all that character & charisma you wanna here on the ol’ m-i-c while dropping bars that actually show serious game when it comes to how the lyrics are written, and even more-so, performed.  Anyone that can work ‘schlong’ into a song gets extra props from me, full-stop.  “Nightcap” seriously has it all though, there’s no doubt about it, this is a single-worthy cut for sure.  The mysterious vibe of the music is perfection, full of brilliant transitions between its main parts that make a huge impact as these emcees flow and the sound shifts in behind them…both Sam and Jessy have found incredible ways to use the dynamics of this song to their advantage…and these lines they write…man…they’re fuckin’ SAVAGELY awesome.  They know they’re crackin’ us up out here – but that’s cool because you know they’re just as into it as we are – I’d be willing to bet my life that THEY are still laughing at how sick, slick, and wild these bars have come out so effectively – this shit will make you genuinely laugh out loud while still dropping your jaw in amazement at how strong, confident, and professional it all flows out through your speakers.  Suck it mainstream – you gotta deal with these guys on their terms if you want’em – right now we’re keepin’em right here in the independent scene, leadin’ the way with rhymes that are bursting at the seams with imagery & character that leave no stone unturned in their attention to detail.  I mean, I’m not 100% sure…but I’m pretty sure I just learned how to fuck for real by listening to “Nightcap” – I think I’ve been doing it wrong all these years after what I know now.  Educational!

These next two cuts come from Jessy’s latest record called No Brakes – and the first of the two he’ll take on his own with “We On The Road.”  Honestly, I haven’t heard a single move he’s made that hasn’t been relevant for the right here & now of what’s happenin’ in Rap/Hip-Hop…this is fully designed to connect with the people listening out there.  Expertly produced by Mr. Wilzon, the sound is killer…another solid example of the smart beats that Jessy works with and the massive dynamics they possess; dreamy melody on the surface and low-end that dives freakin’ deep into bass to achieve spectacular results.  “Flow made out of gold” – he ain’t lyin’ y’all – Jessy’s eatin the lunches of other emcees out there with the amount of style & skill he’s bringing to the mic.  The standard and high-bar he’s set for himself lyrically is clearly something he never lets slide in quality – he’s crushin’ it once again on “We On The Road,” keepin’ it rhythmically wild & loose in attitude, and yet all incredibly tight & focused when it comes to how he hits them bars with such precision and punch in his words.  It’s my first experience with Jessy’s music overall here…so I’m just catchin’ a ride now while others out there have been ridin’ already, I get that, I get that – but I think the beginning of this cut will clue you in a bit more into the journey he’s been on to get here.  From what I can find online there at Spotify – No Brakes is his second record of 2018…and perhaps from what he’s saying to us at the beginning of “We On The Road,” he’s making up for lost time.  From the sounds of things…he’s lost a whole bunch of his art, music, and lyrics along the way – but make no mistake, he was obviously still ‘in it’ for a while; the work & material might be gone, but the skills, experience, and talent remained – and here we are.  It all might have been ‘a long time coming’ – but he’s launched out of the starting blocks here in 2018 like he’s already ahead of the game…make no mistake emcees, Jessy Piff is a stylistic force to be reckoned with.  And considering it sounds like he’s ALWAYS got them greens fired-up…give the man even more credit for holdin’ it together – he’s the kind of artist that proves the almighty herb is an enhancement, not an impairment.

We got a second cut from Jessy’s No Brakes record and a return to the action from tayte the Technician on “Batman.”  Like I said homies, we got lots in common here between our interests – I’ve got a Batman tattoo on my left arm, first one I ever had done in fact.  I walked into work the next day feeling like the king shit of turd mountain, all proud of my ink – and the first comment I got from a smartass co-worker was ‘Ohhhhhhh yeah!  That’s gonna help you in jail.’  Bastard.  Anyhow – back to the music.  “Batman” has got the JUICE yo!  Produced by tayte the Technician as well – they strut and pimp stroll through these bars with ease, working an unforgettable rhythm and vibe amongst strong hooks and an entire vibe that brings the party straight to the speakers from the lefts to the rights.  Probably closer to the Rap/Trap edge of his style in comparison to something like “Nightcap,” which was all Hip-Hop all-day – BUT – I don’t feel like there’s any drop whatsoever in quality, commitment, or the strength of his ideas here on “Batman.”  In fact as far as hooks are concerned, this might very well have the strongest ones of the bunch…the rhythm of the words flowing in the chorus of this cut definitely have you feelin’ it – “Batman” will get ya amped-up to the point where you’ll be out there on the streets fightin’ fools at random like you’re a version of the infamous superhero yourself tryin’ to stop crimes from happenin.’

All-in-all though…the only real crime would be not listening to what Jessy Piff and the talent surrounding him are droppin’ out there online – this whole set of cuts has had serious energy and spark to it & the main star of the show has shown his ability to flip the script and infuse multiple styles into his material along the way.  People dig that diversity in sound…and combined with the fact that everything you’ll hear sounds so damn REAL because you KNOW that this is the life Jessy is truly livin’ – there’s endless amounts of fun to be had in listening to what he’s got goin’ on, serious skill on the mic at all times, and all the reasons you need to turn his music right the fuck up to the rafters.