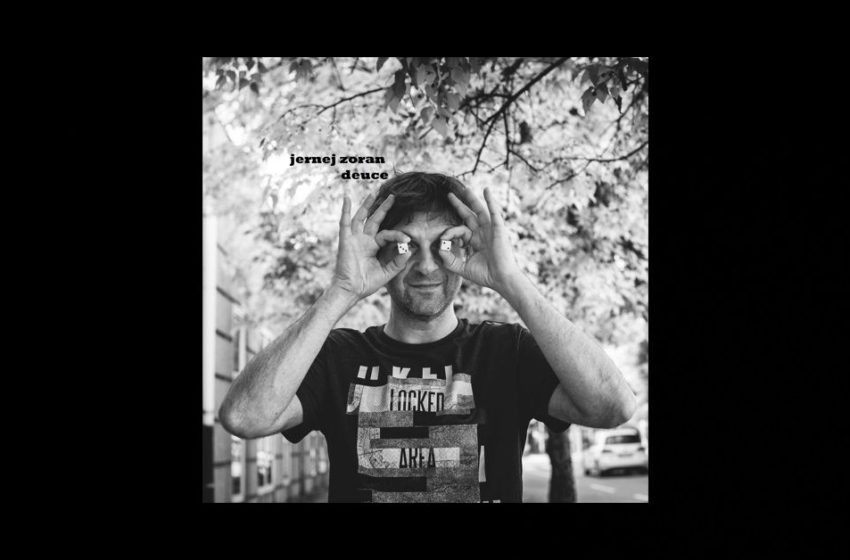 If this dude isn’t on your radar and on your playlists by now, he certainly should be.

Personally, I first heard Jernej Zoran’s music when I reviewed the album Gotcha! under the name of Ivansson…that was when I learned all about the Slovenian guitarist and discovered what an incredible talent he truly was, is, and likely always will be.  I mean, if this new EP is any indication, there’s no way I can be proven wrong in claiming all that good stuff about Zoran’s music; he’s done a phenomenal job on the five new songs on this record – Deuce is absolutely audibly fantastic.

And it all starts like it seems like Jernej Zoran isn’t even aware that he’s making a record!  With the smooth mix of hazy vibes & vocals working their magic on ya as “Swamp (Oh Yeah)” begins, you glide right into the beginning of this EP without hesitation.  It’s like we’re all waking up and stretching out together as “Swamp (Oh Yeah)” plays on…its sliding & winding notes flaring up and sparking the song to life in a way that feels remarkably natural.  I’ll say this…it’s a sleepy and unexpected beginning perhaps – but once you hear its allure and how effective it is, “Swamp (Oh Yeah)” will have you completely reexamining your plans on how to start your next record…because ultimately, this is how you do it.  An opening doesn’t have to punch us in the face to get our attention – in fact, you’ll likely find your favorite records are the ones with a song at the beginning that earns your attention & approval by being straight-up interesting & provoking your curiosity…and that’s exactly what this first track on Zoran’s EP does.  The whole tune has a real warm glow to it…inviting, soothing, and the kind of inventive beginning that catches your interest right away; ultimately, I think “Swamp (Oh Yeah)” will surprise quite a few people out there that might not fully understand the hold it will take on ya in the first couple seconds – but by about thirty-seconds in, you’re nuts-deep in the haze of this melody & ya never wanna leave it.

Give the man some credit where credit is due…you don’t often hear songs with the kind of personality that the title-track “Deuce” has.  We often talk a lot about vocalists that have the ability to use their voice like an instrument…while some of the major players out there in the mainstream are able to do the opposite, it’s quite rare in the independent scene to discover a musician that has the ability to communicate through their instrument like Jernej can.  When you listen to the uniqueness he creates on “Deuce” and the way he plays it, it’s completely like the guitar is singing to ya.  In a wild blend of like, Psych/Blues/Rock, Zoran soars through this cut with high levels of inspiration and imagination leading the way.  Smart backing layers contribute big-time on this track, from the bass to the drums to the trumpets, it all provides a steady core that Jernej can rely on, allowing him to roam out to the furthest extremes and really get creative in the way he plays through this song.  The instrumentation is obviously as relentlessly impressive as we know Zoran to create – but listen to how inventive this track really is will ya?  At the end of the day, there’s a huge advantage in that main riff that dominates and defines “Deuce” – there’s massive amounts of identity in the hooks it creates and it’s 100% memorable.  It stands out so much, that it’s bound to be the focal point and the main element that determines whether or not listeners out there will dig on it…and it’s different enough that it could very well be a polarizing issue for some…but I think, at the very least, if you’ve ever played an instrument yourself, you can’t help but love just how much “Deuce” brings to your speakers.  For those that dig it, believe me, you’ll get plenty of what you love on “Deuce” – this whole track is like an odd celebration of vibrant & colorful sound, and by the time you’re into the hooks, neither Jernej playing, nor us out there listening, want this moment to end any time soon.  Killer charisma & character on display from beginning to end in this cut.

His talent for speaking through his guitar isn’t just noticeable on “Deuce” – listen to the immaculate job he does on the melody of “Eleutheria II” as it heads straight for your heart; this is a truly amazing cut.  Everything about this track worked perfectly in my opinion…this entire vibe, idea, and set of sounds all stack up to a seriously incredible song…a mesmerizing mix of melancholy & shimmering beauty as one.  Listen to how gorgeous the comeback is after the breakdown…listen to how jaw-dropping spectacular the solo is past the three-minute mark…there is, quite simply, some of the most impressive musicianship that you’ll hear this year, right on this one tune.  The longest song on the record by a fair margin, you can’t help but notice just how well Zoran uses the extra time & space on “Eleutheria II” – it’s epic, it’s melodic, it’s expertly composed and professionally performed – you literally couldn’t ask for anything more than exactly what Jernej gives ya on this tune; absolutely everything you’ll hear is extraordinary.  As much as I might love the unique way a song like “Deuce” ends up coming out, I’m still no different than most of you at the end of the day; an amazing melody is an amazing melody, and quite often, those connect the quickest & the most securely.  I know I could listen to a song like “Eleutheria II” on any given day and be 100% in the mood for it…and if I was pressed for my absolute verdict on the Deuce EP, I doubt I could resist pointing out the fact that this would indeed be my favorite song of the bunch, if I’m being entirely honest.  Like…by the time you even get to what is one of THE BEST guitar solos you’ll ever hear in your LIFE, you’ve already been charmed from the lefts to the rights by what Jernej has created in the heartfelt sounds of “Eleutheria II” – and once you DO get to the solo, it’s completely game over – you have zero choice after that point but to be authentically awed by the results of what you’ll hear from Zoran.  From the added drama, tension, and beauty the piano creates in supporting the melody, to the all-out award-worthy way that Jernej lights up the frets so impressively throughout “Eleutheria II” – I can’t help but feel like I won’t be alone in feeling like this track is a formidable highlight on the Deuce EP.  I’ve had to pick my jaw up from the floor EVERY single time I’ve listened to this cut and the solo from Jernej…the man puts in a flawless performance on “Eleutheria II” that you can’t take your ears off of.

“Blue” is good.  You’ll find no complaints from me about this tune, even with as much as it noticeably dips headfirst into the Blues without apologies, and how typically outside of that entire genre you’ll usually find me.  While it riffs on a somewhat standard & comforting line at the base of “Blue,” it’s the outstanding guitar on the surface level and the loose nature of this tune that ends up giving this cut its more innovative flair.  For what’s actually the shortest track on the record, it’s big on charisma – Jernej flashes massive chops in a short amount of time on “Blue” and gives us all another reminder about how he can throw the switch & kick it all into the next gear anytime he chooses.  Dude’s just got impeccable touch & feel when it comes to how he plays guitar, and he leaves his own signature stamp all over “Blue” – sure it’s got that familiarity of its Blues-inspired roots, but listen to how adventurous, ambitious, and straight-up skilled Zoran is when he plays – you can’t miss it.  Though I have to admit, with that deep stomp of the bass-line, I did for a brief moment think he was about to launch into a cover of the Alannah Myles megahit from the 80’s, “Black Velvet” – but thankfully, as rad as that might actually be through the lens of Jernej Zoran’s scope & capable musicianship, “Blue” becomes much more his own deal as it continues to stomp along.  You feel it, because you can feel Jernej feelin’ it – you feel me?  “Blue” is 100% about the way he plays it, not just what’s being played – I mean, that’s just the recipe for great Blues tunes overall ain’t it?  Zoran gets that…you can HEAR he gets that on “Blue.”

The final track “Daydreamin’” was a real stunner & a solid way to end the record in a way that everyone out there listening is sure to give their full attention to.  Stripped down to just the guitar for this last song, Jernej proves that it’s not just about what’s being played, it’s how he plays it – the emotion that you’ll find in the melody is incredible and the character he puts on display in his instrumentation is beyond wonderful to listen to.  The idea of having this last song so bare-bones in sound gives the entire atmosphere a refreshing lift when you listen to it; it’s isolated, it’s intimate, it beckons you to listen to the sweetness of every note hanging suspended in the air around you as they bend, morph, and ring out from your speakers.  It’s the kind of subtleness in sound that has you listening so intently that nothing else around you seems to be happening at all…you give “Daydreamin’” your undivided attention, because somewhere inside you, you feel the connection to this melody & have to know where it goes.  Like I’ll put it to you this way…in my mind, there’s almost no competition for “Eleutheria II” on this record, even though I admittedly love every tune on the Deuce EP – but every time I HEAR “Daydreamin’” I question that judgment.  There’s just something truly outstanding about the sparse nature of sound and the humble demeanor of “Daydreamin’” that undeniably hits the mark for me…it’s another song that gives off a similar vibe like the opening track did, where we just stumbled into Jernej’s world for a moment, found him riffing it up all on his own, watched for a while from the corner of the room without him even knowing we were there, and sauntered out fully satisfied once he was finally finished.  So don’t get me wrong, don’t get my words twisted here…for as few ingredients that are involved, “Daydreamin’” ends up being nearly just as much of a highlight as “Eleutheria II” was for me, and there’s a heck of a lot more goin’ on in the latter tune, as you know by now.  To have such a bare ending come out so fascinating to listen to, and so engaging, is an achievement in itself; the facts are the facts when it comes to what Jernej Zoran creates – he’s a killer player and his compositions, structures, and sound are stocked full of supreme entertainment, even at their most minimal.  I think he’s got a tight lineup of five tracks on the Deuce EP that are universally accessible and perfectly played; and I doubt any set of ears could reject the talent, skill, melodies, and ideas that can be heard on this record.