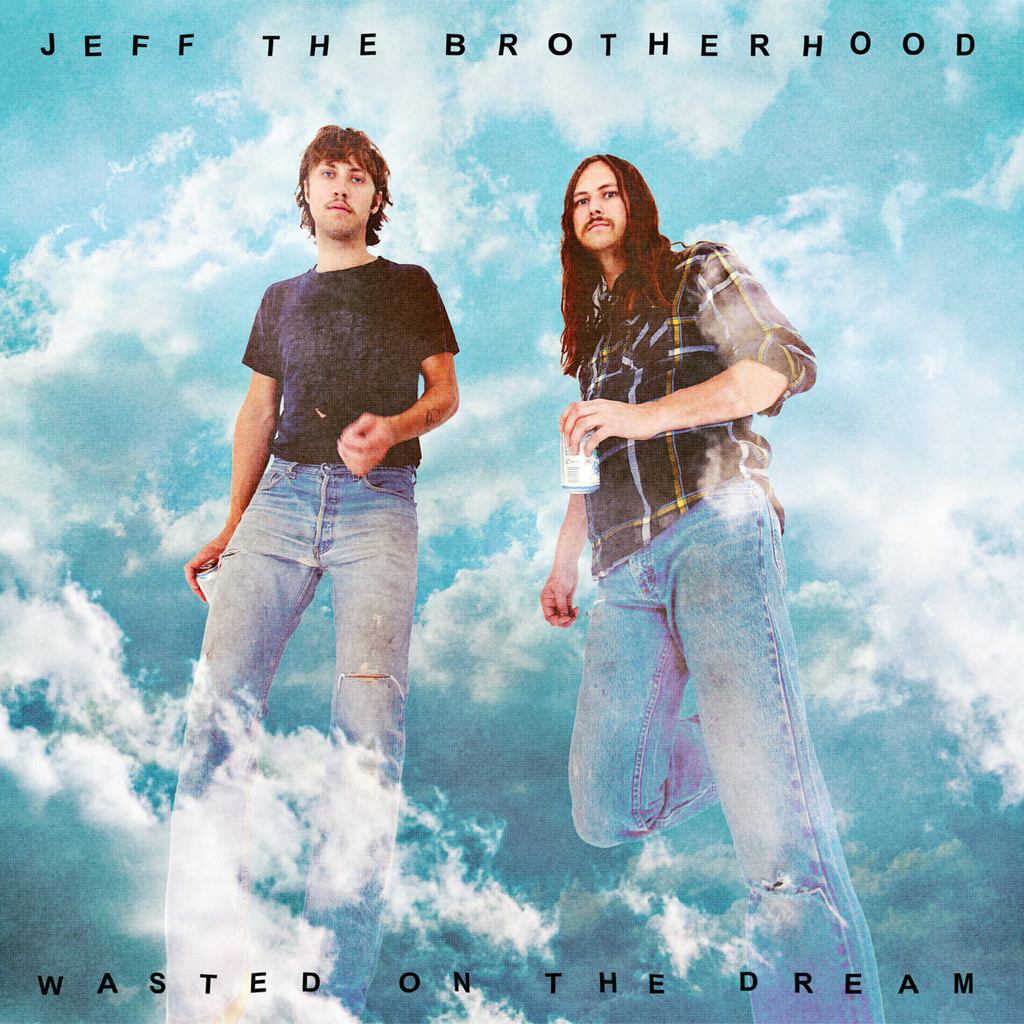 Jeff The Brotherhood – Wasted On The Dream – Album Review

Sometimes being rooted & entrenched in the independent music-scene can allow mainstream bands and artists to fly wide of my musical-radar. Jeff The Brotherhood certainly spent their time and paid their dues in the indie-scene before their massive breakout & worldwide recognition in 2011; I feel guilty today…this is the kind of band you’d almost expect me to be familiar with, but I’m actually not. Everything you’ll read today is not only my first impressions of the duo’s new album Wasted On The Dream, but also the initial thoughts on what this band even sounds like; I have to admit – I’m jumping on this bandwagon plenty late…

And sometimes dear readers…sometimes that HURTS. It hurts BAD. Today is one of those days. On the one hand, this music has put an incredible smile on my face and really amped me up for the day…and I’ve got a gigantic back-catalogue to check out as well now; but on the other hand…how much time have I been wasting in NOT listening to Jeff The Brotherhood? These guys fucking rule! If you are looking for an immaculate, bold-crunch in your rock music infused with brilliant pop-sensibilities – look no further than Jeff The Brotherhood this summer.

I probably don’t need to tell any of you this. Why in the hell weren’t you telling me years ago?

They start out thick and low-end heavy on the opening ride through “Voyage Into Dream,” which was truly my first experience ever hearing this band. So we’re dealing with riff-rock you say! Bring it on! If it’s going to sound this good – consider me in. Combining simple & complex parts in the writing, wicked timing & great tone – “Voyage Into Dream,” is an awesome opening to the album and opens it up with a psychedelic-rock fury that brings the energy and your volume up quickly and seemingly effortlessly. This opening cut reminds me of a little more refined version of the sound I love in the garage-rocking/grunge-band Dandelion, but there’s a lot more control on display from Jeff The Brotherhood already in this opening.

So…okay…FLUTE? No one told me I was going to get FLUTE sounds on this new rock album; now let me tell you all about one of my favourite cuts on this new album, “Black Cherry Pie.” I’m not even going to feel REMOTELY guilty for liking this song, cause it’s awesome. YES…I can see it’s the pre-released single/video for the album…I can’t blame them whatsoever – this song has an excellent pop-melody buried deep into their rock that’s guaranteed to catch anyone with the sharp hook in the chorus. Excellent additional instruments make this song shine and pulse with creativity and innovation in a way that celebrates true pop-bliss and full-on entertainment for the ears.

I think my impression of what I thought Jeff The Brotherhood might have sounded like, was found in “Cosmic Visions.” Now, in saying that, I’ve got myself scratching my head even more…if I thought it was going to sound like this – how in the hell have I not been listening to this band by now? This reminds me of Limblifter – who many of you already know I’ve professed my love for many times, but it also has a more accessible sound overall. Where Limblifter and Ryan Dahle made a unique sound in rock, at the end of the day there was never an extraordinary effort to be heard so much as make music; I think Jeff The Brotherhood and the music certainly borrow from the outside-the-box post-alternatives, but at the same time they are taking those formulas and adding a hugeness to it all that is extremely rhythmic and powerful to listen to.

Adding a sharper punk/pop edge to “Mystified Minds,” it can certainly be said that these guys have put together some captivating music here that shows skill and a genuine love for the music. The work has definitely put in and where I’m coming into the music of Jeff The Brotherhood here on their latest is certainly not the work of two dudes in a basement; there’s some real genius stuff happening here within the confines of Wasted On A Dream. I really dig the following track “Melting Place,” which is like an extreme blend of bands like Primus, King’s X, Queens Of The Stone Age, Alice In Chains, Mudhoney, old-Soundgarden…it’s wide open rock that contains all the switches and solos your ears could possibly ask for. Slightly more experimental, more menacing in sound…it’s a track that will pull you in to listen out of curiosity more than simply with a straight-ahead hook.

In a massively successful combination of talent, the following track “In My Dreams,” featuring Best Coast’s sweet-singer Bethany Cosentino is one of the songs gunning to take the top-spot & space at the forefront of your mind. For those of you that have children, this might prove to be a difficult thing to get over…so I highly advise exercising extreme caution before turning up “In My Dreams” as loudly as you SHOULD. This song threatens to take over my entire life…so you’re not alone. Absolutely love the combination of these two vocals sounds and the writing is just full of hook-laden insanity once again. Cosentino has the perfect voice to fit into this song and she delivers with attitude and perfect tone from beginning to end in this guest appearance.

The three tracks to follow definitely had a place back-to-back-to-back as they are on Wasted On The Dream. See if you dig THIS comparison…I’d say these songs have a…Weezer-On-Steroids-Decide-To-Try-Takes-On-Rhythms-From-The-Police kind of sound to them. Excellent pop/rock here and tackled with immensely expanding ideas and sounds that definitely lean the band more towards the pop-side than on much of the album, but they never leave the rock behind. Interesting use of theatrics and really sharp dynamics that pull you into the sentiment of “Coat Check Girl,” while the preceding track, “Karaoke, TN” was literally designed for you to sing along to; and it’s all working out perfectly for Jeff The Brotherhood no matter which road they go down.

With some post-punk influence, “What’s A Creep” almost drifts into musical-terrain established by the innovative minds in TV On The Radio…but again, like, all-juiced-up or something… I don’t know of too many duos that can pull off sounds as large and with as much impact as what I’m hearing here the music found on Wasted On The Dream. Completely solid stuff and extremely skilled musicians; the hook in “What’s A Creep” is such an infectious groove that can’t be ignored…this second to last track really gets you moving and the blood rushing right through you all over again in the late stages of the album.

Ending on “Prairie Song,” this self-reflective tale ends the album on a mid-tempo note with a wide-open anthem that leans once again towards that celebratory Weezer-like vibe. It’s a well-written tune to finish this off…and I’ve gotta say, I don’t know so much about where Jeff The Brotherhood started, but I can certainly tell you where they’re at now – this is the alternative sound reborn here in 2015…and it sounds vibrantly fantastic and massively inviting.

Tags: Album Jeff The Brotherhood sleepingbagstudios Wasted On The Dream