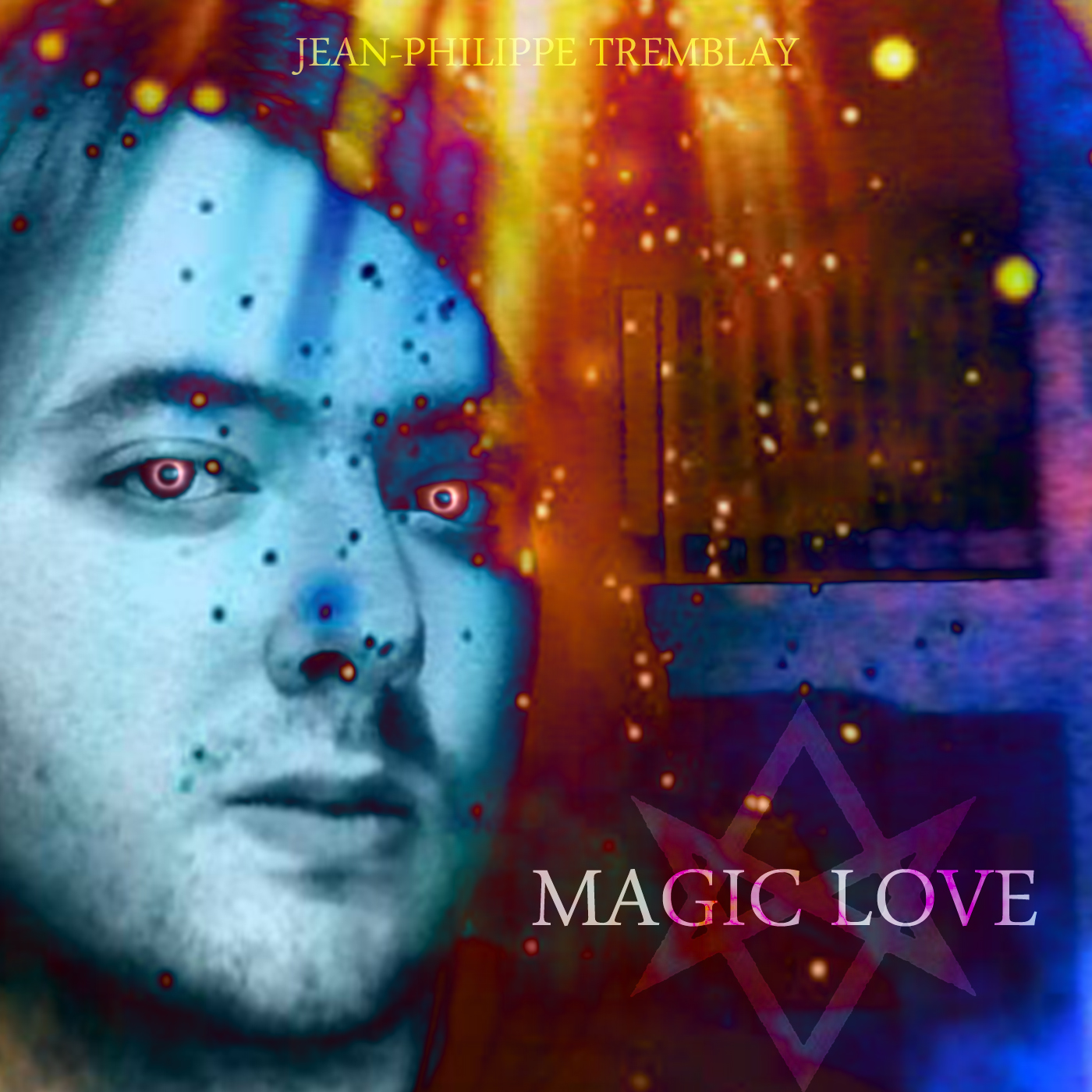 I feel a massive kinship with Jean-Philippe Tremblay…it’s been a while since I’ve stumbled across music that’s made in a similar fashion to my own band. Very much like the music that my old studio-partner Rob @ SBS and I still continue to make, long after the dissolving of the partnership. What can we say for ourselves other than the music has always come first…nothing gets in the way of that after having declared ourselves as a band nearly 14-15 years ago now. I like very much that what Jean-Philippe is doing on his new album Magic Love reminds me of that same abandonment of traditional song-writing in favour of exploring new musical terrain & finding the real freedom in music as we do in our band.

Magic Love has an exciting energy and attitude to it. The music starts out in a darkened electro-stomp as Jean-Philippe brews up a quick storm in less than ninety-seconds as the album begins with “Echo Of Times.” Coming from a similar angle of music, my ears were totally ready to accept the real freedom of expression you can find in this opening track and the album to follow. Drifting perfectly into the wide-open textures of “Last Chance,” Tremblay has put together a haunting mixture of sweet-sounds and clever bass & guitar-lines. It’s like a combination of one half DJ Shadow on a song like “Building Steam With A Grain Of Salt” mixed with like…The Lion King soundtrack? I’ll definitely say it’s a lot heavier on the DJ Shadow side of the two halves, but the spread-out, excellently placed vibe in the drumbeats give it all a feeling like you’re sitting right in the very center of the circle of life!

Not that he’s using either of those songs or anyone else’s for that matter…that comparison is simply for reference only and definitely alludes to a unique combination that works extremely well throughout “Last Chance.” The flow of the Magic Love takes you into “First Contact” which branches of the atmosphere of the opening tracks and begins to display more dynamics and versatility in the music through additional electro-elements that pulse, switch, glitch and brighten this track, driving it forward with palatable, unique energy.

You could potentially argue that the most likely reason for the slight misstep in production values at the outset of “Luminosity” is due to the fact that Tremblay is probably pretty damn excited about it. I love the dreamy atmosphere of this song…it makes me think of like…I dunno…walking through a theme-park or a wide-open field without a care in the world. Despite its noticeable increase in volume, “Luminosity” harbours a real sweetness to it through the warm & inviting tones that Tremblay has wisely placed in.

He’ll extend that warm hug-of-sound throughout the next song and take the music for a large departure from the overall sound on the reggae-influenced “One Love.” Again – I dig that Jean-Philippe has chosen to not limit his style or sound in any way, shape or form; while reggae-anything might not be something you’d find on my own playlist regularly, it’s still a vibe of unity and happiness I’d never turn off. “One Love” really takes on that attitude with confidence and leads the way to a brighter day with its pleasant, good-time atmosphere.

For me, the middle of this album is where you can find some absolute audio-gold and real highlights within the music of Magic Love. Jean-Philippe Tremblay goes on an incredible run over the next several songs; lacing in emotional-electro in layered waves of uplifting sounds, “So Light” begins a tender journey through an inspired set of songs that strengthen the Magic Love album in its middle. Captivating the ears even more-so than they already have been throughout the record, “So Light” reveals the massive potential I can hear in Tremblay’s music in full…brilliant song made in a completely subtle but incredibly entertaining style. It sparkles, it shines…”So Light” is a real beauty.

But if we’re talking about straight-up good-times – look no further than the groovin’ “Papa Don’t Cry.” Bouncy, playful…the track sounds like it was recorded right onto a rubber-band! You have to credit Jean-Philippe once again for Magic Love truly possessing a sound or style for everyone; the highly danceable atmosphere he’s created in “Papa Don’t Cry” would move even the most hatin’-est hater out there…you can’t help but feel the love in a song like this.

In a fireworks display of ‘this is what a title-track REALLY sounds like,’ Tremblay puts out epic low-end sounds in the dark, groovy rhythm of “Magic Love.” Put it to you this way…sometimes songs play and I’ll write about them as it comes to me…maybe I’ll insert a few ‘the song’ sentences with the actual name of the song later, whatever song that might be. And then there is a whole different breed of music, where once the song starts to play your head immediately reacts and nearly gives you whiplash as you look up to see the playlist and what the title is; the kind of song where you’d be doing YOURSELF a disservice by NOT finding out the title so you can listen again.

“Magic Love” is exactly that kind of song. I swear my neck still hurts days later after hearing it for the first time and looking up immediately and altogether too-quickly nearly injuring myself just to learn its title. I shouldn’t have even questioned which track I might have been listening to – “Magic Love” is such a menacing epic that it should have instantly stood out to me as the opus-magnum of the entire album. With its animalistic nature and fantastic low-end rhythm, it’s like something you might have found on the instrumental series Ghosts from Nine Inch Nails. Staying mired in the murk, “We Own The Night” keeps you on the dark-side of electro as the atmosphere swirls around your ears and crunchy electric guitars begin to invade with authority.

JP isn’t joking around with the title of “Against The Clock,” it’s almost like you can imagine him setting a timer beside himself, challenging his abilities to create a masterpiece within a set time frame. As short as it might be, this track works brilliantly and builds frantically and fantastically as it rips through ninety-six seconds of smartly assembled electro.

Saving some of the most incredible music in his catalogue for the very end of Magic Love, “If You Dare” and “Love Land” deserve entire page-long reviews of their own; I could literally go on and on about these final two tracks. As if the excellent rhythm & pulse found in “If You Dare” wasn’t already enough on its own, the additional string sounds and immaculate explosion-samples placed throughout make this track soar into genuine highlight moments.

Truly though…I don’t know that it gets any better than the very end of Magic Love, showcasing the fact that Jean-Philippe can layout an entire album as effectively as the individual songs he creates. With a jazzy trumpet flooding the mix with astounding emotion, the grinding beat underneath keeps that hypnotic, foggy back-alley feeling to “Love Land” flowing smoothly as it switches subtly into piano, chimes, wind and added beats to thicken the dynamics of this last tune. The result leaves you with the impact the album deserves and really gives you some hope that this artist will continue on for a long time in the same creative-vein he’s tapped into. Excellent ideas from Jean-Philippe Tremblay on Magic Love that certainly point to this artist’s ability to innovate from an endless well of creativity and pure love for all-things-music.