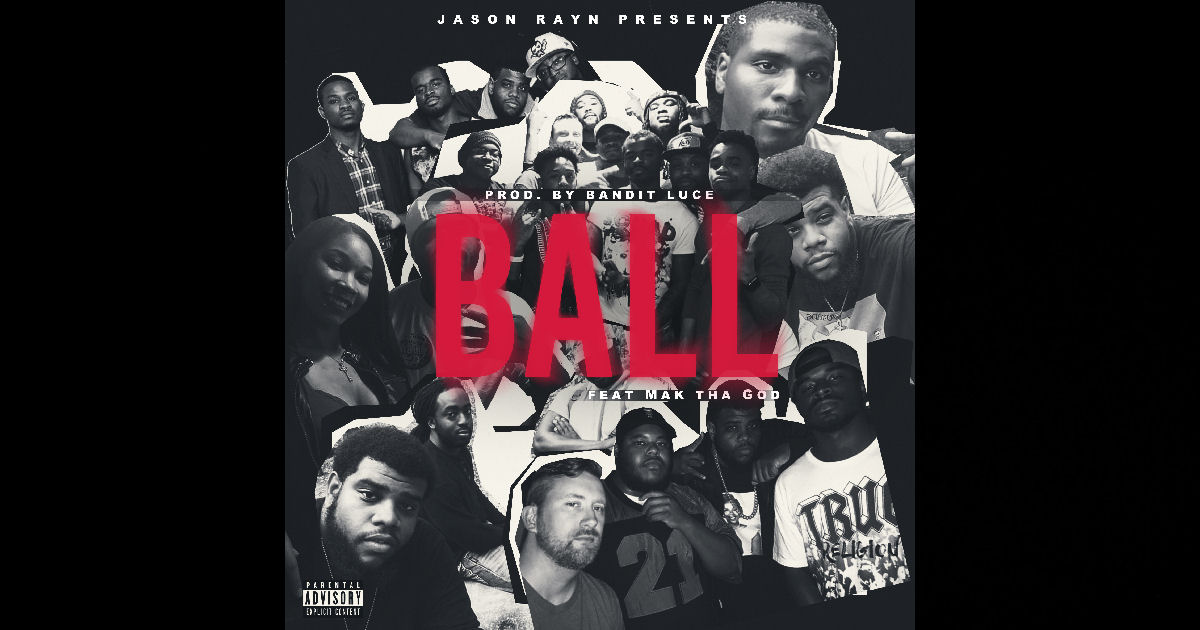 “Haters, I got plenty…problems, I got many…”

That may very well be the case homies, but listen to the man Jason Rayn rise above & continue to keep on his grind no matter what anyone might have to say.  Besides – you’ll hear from his words direct on his new single “Ball” that he’s still got plenty of support & people in his corner as well…ultimately, this cut is all about the desire to chill & hang with his circle, doin’ what they love and keep it all movin’ forward.

“You only as real as the company you keep.”

As if that ain’t one of the most insightful lines you’ll hear in any song this year!  Rayn makes a good point and I couldn’t agree more…whether it’s friends or family or otherwise, who you end up keeping close to ya actually ends up speaking volumes on your own behalf as well…they might not necessarily define you entirely, but they do tell a part of the overall story.  So choose wisely y’all…”Ball” with the people that deserve your time & energy, people that build you up and help you grow & evolve – listen to the words of Jason’s new single and you’ll hear from his lyrics and the inspired flow he’s flexin’ on the mic, that by surrounding himself with the right crowd, he’s found a way to tap into the best of his own potential in the process.  “Ball” has the main man on the m-i-c sounding locked right into the moment perfectly.

Or I suppose, make that, the main men on the m-i-c, because you got Jason Rayn backed-up confidently by his homie Mak Tha God taking the final bars home on this new single.  Definitely the kind of cut that, considering the points that Jason’s looking to make with his words on “Ball,” it was the perfect time to get an assist on the bars to tie the theme, concept, meaning, intentions & ambitions of this cut together.  Both emcees deserve credit for delivering the goods in full-effect; they both bring their own personality, vibe, and style to the mic, while also managing to completely suit the song & complement what each other does individually through the strength of the overall collaboration & talents combined.  When you find the right backup, and you pull in an artist to add to your material, you want it to stand-out and make an impact…you want that moment to be memorable…and that’s exactly what Jason gets from Mak Tha God on “Ball.”  That difference in between styles & sounds of emcees on the mic can be a huge asset – and listening to the switch between the wild personality of Rayn transitioning to the bossed-up sound of Mak Tha God hits that mark you always hope a guest-star on the mic will bring a track to, but so rarely often do.  Jason just wants to “Ball” it up in the studio 24/7 and he’s looking to take everything he does to the next-level every damn day – securing a talented emcee like Mak Tha God to reinforce the message and help drive it all home was a real solid move & a smart choice made to suit the song 100%.  Plus…like…I mean c’mon, those hooks y’all!  So good!  Immediately enticing through the rhythm & flow shifting the words in the chorus so fluidly…people will be latching onto that big time.

Focus and put the work in, you get results – that’s the lesson to be learned here on “Ball” by Jason Rayn.  If you wanna know the REAL secrets to what the mindset of a mogul determined to make it can be like, have no fear – Jason literally speaks that truth right at the very beginning of this cut.  Class is in session homies, pay close attention – because not only do these two emcees crush this cut with confidence, slick bars, and all-out audio entertainment for ya, but they’re spittin’ valuable insight & droppin’ important knowledge-bombs throughout this single.  I’ve gotta say, we’ve reviewed Raynman’s music since 2016…so a couple years or so at this point…I’m familiar with what he’s brought to the mic in the past, and while he’s always repped strongly, he’s also continued to evolve & grow exponentially as he’s continued on.  You know…time & experience…refinin’ his skills…all that good stuff happens throughout the course of a career if you’re dedicated to doin’ it right.  Jason just wants to “Ball” it up in life & party with his friends, cut a few beats, bust a few rhymes…and I mean, who could blame him?  Bottom line is, it’s the work he’s putting in NOW that leads to the ability to “Ball” later on – and he knows it; he’s laser-focused and razor-sharp, ready to make it happen, and sounding fresh as it gets in 2019 on his latest single, backed-up by a powerful performance from Mak Tha God that reinforces the strength of the message and skill you’ll find on this latest cut from Jason Rayn.  Solid work all-around y’all – turn this up & keep that party goin.’