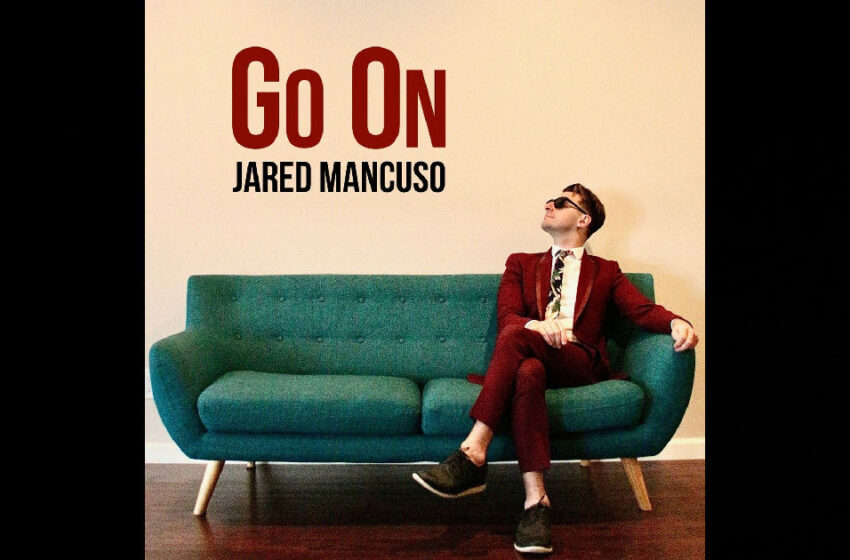 I don’t claim to be any kind of prophet, but I am on record already several times this year swearing that 2021 is gonna be one of, if not THE, best years of independent music we’ve experienced so far – and here’s some more verifiable confirmation of the incredibly kickass start this 365 is having out there.

Not that we’d expect anything less than some kind of awesomeness when it comes to Jared Mancuso – this dude is seriously memorable.  Seeing his name pop onto my playlist here in January immediately brought back a review I wrote about the guy a couple years ago now, for his album Hype! in 2018 – and of course the music I remembered along with it.  You don’t really forget artists like this guy; either for the musicianship, or the larger-than-life personality that often comes with it, he really is unforgettable.  Mind you, the longer this beard of mine gets & the more grey enters into it, the more muddled my entire brain seems to be becoming as well…was Jared not on his Jack White trip the last time around when I was listening to Hype!?  That’s the same guy right?  Hype! had so many great moments on it from what I remember…I can still hear the sound of the way he went wild on cuts like “So Strong” and “Splendor” – there’s a lot of ingenuity on that record that still brilliantly holds up to this very day…

…but none of it…is THIS.

Two things can be, and are true.  One is that, sure, ultimately a musician as skilled & talented as Mancuso IS…could probably write this tune, and likely even execute it in his sleep – he really is THAT good when it comes to his material & musicianship; but on the other side of that coin, the second thing that’s true, is that this single is undeniably perfect in every conceivable way.  In fact, “Go On” might very well end up being one of the songs you’ll find easiest to like or love this year – and I wouldn’t blame you at all if ya did, that’s exactly how I’m feeling over here.  This isn’t the type of cut that will take several spins to convince you of its single-worthiness, no – it’s an immediate and instant hit of so much of what I personally love about the mixture of melody & rock combined, with brilliant hooks that are bound to snag many more people out there than just myself, believe that.  So even though upon its shiny surface, a cut like “Go On” appears to be somewhat easier for an all-star like Mancuso to create in some sense, can you blame a guy for maximizing the potential of an opportunity like this?  When you stumble onto a song and hooks as strong as these, you don’t just throw it all away folks – you rock the living daylights out of it, and that’s exactly what Mancuso has smartly chosen to do here on his brand-new 2021 single.

Sometimes it’s also the sound of an artist really finding that space where they can thrive – and that’s what “Go On” sounds exactly like to me – Jared THRIVING.  The Canadian side of me wants to adopt our US Phoenix-based friend-o here…because Mancuso reminds me a lot of bands I love from Canada like Acres Of Lions and the Barstool Prophets when it comes to the clever Alt-melody in this song – but I also have to acknowledge there are similarities to bands I also love outside our borders like Weezer & Jimmy Eat World as well that also bear resemblances in comparison to the energy & amped-up vibes of “Go On.”  All I know is, I might already be another year older this year, but these ears of mine have never once deceived me – they know awesomeness when they hear it, and this single is exactly that.  There is NO amount of volume that is ever gonna satisfy just how much I’m willing to turn this song up as loud as I can get it.  Honestly, what’s NOT to love?  It’d be a thousand times easier for me to list that instead.  I know my list of things not to love would be pretty damn short…as in, there’s completely nothing on it.

So look…the semi-burden of having multiple comparisons is always implied; there’s less identity to attach to the artist or band making the music, but that’s never necessarily a bad thing at all – and if ya blow up big enough, believe me, it ain’t a problem at all – recognition from listeners will come with both experience & exposure.  A song like “Go On” should get PLENTY of the attention it deserves – it’s the audible definition of Pop/Rock perfection, and once you DO hear it, it WILL bring you back – relentlessly.  Mercilessly really.  From the moment I put “Go On” on for the first time, I went on a complete streak of repeat spins, practically defying anything else that might be important on my schedule in favor of listening to this single just a lil’ more, and for as long as I could.  It HAD to be more than an hour by the time I snapped out of it – which is mighty impressive for a three & a half minute tune that has any element of Pop-flash or sing-along hooks to it…but no matter how hard I tried, I couldn’t wear this track out even one ounce.  Immediately feeling like a musical junkie needing to get well – I pushed play, again.  And again, and again – you get the idea…”Go On” is about as addictive as a single can potentially BE.

So…the question becomes – what now?  What SAY you Mr. Mancuso, and where DO we go from here with all this?  If you read closely on the page at Bandcamp where “Go On” is posted up, you’ll see in the details that he has indeed, chosen to shift away from this sound, generally speaking, when it comes to where he’s going with his music now.  And I get it…much for the reasons I highlighted earlier on in this review – at the fundamental core, “Go On” might honestly not be challenging enough for an artist of Jared’s caliber.  That’s not me rubbing his nuts – this is me being objective and knowing what he’s capable of.  I suspect he feels that himself, and that’s largely why he’s probably chosen to head into new ambitions when it comes to the music he’s making these days now.  BUT!  I mean…you listen to the absolute PERFECTION in this 2000’s style Alt-Pop heartbreak tune and the boatloads of melody it has, the stunning vocals of Mancuso…the all-out bulletproof hooks and flawless execution…and good lord – if this doesn’t convince the guy to at least crank on his amplifiers and rip one of this gems out every so often, I don’t know what else could.  HE should be every bit as addicted to “Go On” as I am, and as I have no doubt that YOU will be as well.  It’d be MIGHTY tempting for an innovative artist like Mancuso to put out an entire record filled wall to wall with tunes like “Go On” – and I have zero doubt he could do it, and that he’d race right up the charts as a result – it’s really an option at his constant disposal.

And just so we’re crystal-clear, there’s a huge difference between something being easier for someone, and just being lazy about it – this is not a case of the latter.  Making a FLAWLESS song, in any genre, is no easy task – ever – it’s always a monumental achievement.  Creating truly universal sound that’s bound to impress over 99% of the ears that hear it just ain’t something that comes along every day – and that’s exactly what you’ll find in “Go On.”  Mancuso’s got the magic – in my opinion, he’s revealed an entirely different dimension of what he’s capable of here with this single, and proven he can be successful – and THRIVE – in multiple realms without question.  I wouldn’t change a solitary moment of “Go On” – it’s as great a tune as you’ll find in the hybrid combo of Alt/Rock/Pop & an undeniable early highlight in 2021.

Listen to music by Jared Mancuso at Spotify here:  https://open.spotify.com/artist/53NCrkYNYye8w8Gl6Ml8ra