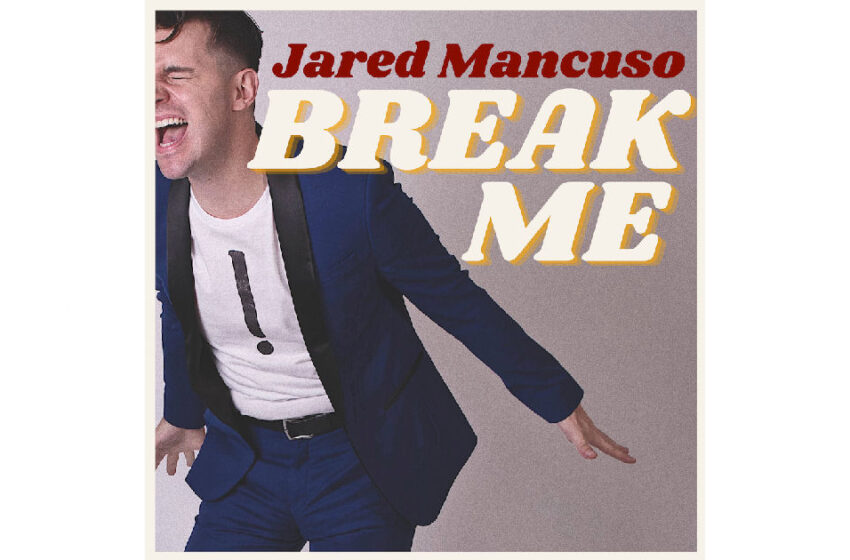 I’d be pretty much lyin’ to ya if I didn’t say I was somewhat expecting perfection when pushing play on Jared Mancuso’s new tune – especially in reading about it beforehand & learning that he was continuing to dive right into the throwback Alt-vibes he was exploring on his insatiable addictive single “Go On” from earlier this year, but addin’ in a bit more emphasis on the crunchy riff-rock aspect for “Break Me” this time around.  Anyone within earshot of me or reading these pages of ours knows full well just how much I’ve been digging the sound & style of Mancuso’s music…dude’s been kickin’ out the jams strong for as long as I’ve been listening, which traces back to his 2018 record Hype! – and he’s been rockin’ strong for much longer than that.  I liked the last record, I loved the last single – and all indications have soundly been proving that Jared’s been dialing right into what works without having to compromise much at all really.  He’s found that balance between what the people out there wanna hear and a riotously expressive style of music that uses his extraordinary skills in wildly accessible ways; you can hear the craft and cunning musicianship for sure, but you can’t ignore the immaculate hooks either.  Think of this as the bridge between what he blazed through his amplifiers and our speakers on Hype!, but with all the clever catchiness in the songwriting that we found in “Go On” – the results have Jared rockin’ out without apologies on a single that’s designed specifically to transition us through our most tumultuous times, back into the greater days we all deserve.

Right from the drop, Jared attacks you with musical hooks – and by the time you’re only twenty seconds in, he’s already found a way to amp-up the excitement even further with explosively colorful & catchy vibes.  The sounds this man gets out of his guitar are sonically right up there with some of the very best of the best…and let’s be real here, the man writes seriously strong & smart tunes – Jared Mancuso knows exactly what he’s doing and let there be no confusion surrounding that.  Reading the audience of the world at-large in writing “Break Me” – he’s created an anthem for everyone out there that’s been stuck inside past their limit through the duration of the pandemic…a true celebratory burst of audible freedom with enough juice in the tank to inspire the people out there to get livin’ it up again as our isolated times subside.  Face it – a single like this right here has that exact jolt of energy you wanna hear right now; as much as I never wanna personally be encouraged to dance – ever – I just might this time.  Hard not to make an exception right now after all we’ve all been through and are still currently facing ahead as we re-emerge into this next chapter of this saga we know as society – we’ve all earned at least a moment or two to cut loose and enjoy this time we’ve got here on our floating rock together, and Jared has most graciously volunteered himself to supply the soundtrack that’ll suit that purpose, 100%.

Or as he’s more accurately put it:  “We have to start to break ourselves back out and ease the anxieties we built up.  It won’t happen overnight, but when you’re ready, blast this song and kick open the door.”

Stylistically slick AF – Jared’s new single is bound to stand out and appeal to you all for multiple reasons.  You could cite the smooth ride through the verses, the wild magic of the rhythm & groove of the music itself, the truly stellar performance he’s put in all the way through this track from the microphone as well – Jared glides through the verse, and bursts on open for the chorus of “Break Me” to perfectly echo the sentiment & vibe he was looking to create for ya – and like, I mean…even the bridge/pre-chorus was freakin’ awesome!  No joke – it’s one of my favorite spots in this whole song, and that’s truly saying a ton with so much of a smorgasbord of all-things-awesome to love on.  Right around the…hmm…just prior to the first minute is where you’ll experience it for the first time…dude shifts into a really cleverly written moment that adds so much to this tune by dialing back the energy just prior to letting it rip for real at maximum intensity.  Ultimately, it’s probably gonna be the chorus that people land on as its most memorable aspect…it’s that catchy…but make no mistake, the entertainment level in this single doesn’t drop one iota for a solitary second no matter which part of this 3:22 slice of blissful Alt/Pop you land on.

Where “Break Me” really succeeds for Jared personally as an artist is genuinely in bridging that gap between what was, and what will be – you follow?  His truest fans that have been there from day one are gonna LOVE what they find on “Break Me,” because Mancuso gets to flex what Mancuso really DOES on this song, every bit as much as keep the masses fully engaged with a series of unforgettable hooks.  Those out there that were looking for a more savage dose of his riff-rock style and mind-blowing guitar solos & sounds than what we got through the lighthearted playfulness of “Go On” earlier in 2021, will be more than pleased to hear how much time is given to the instrumentation that has always made Jared’s music exciting, innovative, and authentically next-level.  Like, I’m pretty much sure that Mancuso came straight outta the womb with the umbilical cord in hand, searching for a place to plug in – he’s so built for the spotlight that it’s impossible to miss.  Note everything I’ve cited along the way…call it a bridge, call it a pre-chorus or whatever – you factor that in with comments on instrumentation, clever themes & lyricism, radiant solos in the mix as well…you gotta recognize just how much Jared can stockpile into one experience and genuinely appreciate the results when you hear’em.  For a song less than three & a half minutes long, it’s more than remarkable that he’s able to work in all that he does – especially when you compare this guy with just about everyone else out there hittin’ up the verse/chorus/verse & calling it a day.  Mancuso puts more into his music than most would ever dare to on a good day – and it’s because of that dedication he puts into his material, his craft, and his musicianship, that we get that much more out of it as listeners every time he shows up with something new for us.  Add in the fact that he’s done this entirely on his own from the recording to the writing to the performance to the final mastering from his studio where he’s proudly based out of in Phoenix, Arizona…all indications & signs continue to point to Jared Mancuso taking full control of the destiny his talent deserves, & thrilling all of us in the process.

According to the official website, “Break Me” will be out there for y’all to enjoy right around the corner from now on June 4th this year – merely days away!  Stay connected & up to-date on the details, pre-save it & all that, by visiting the Jared Mancuso homepage at:  https://www.jaredmancusomusic.com