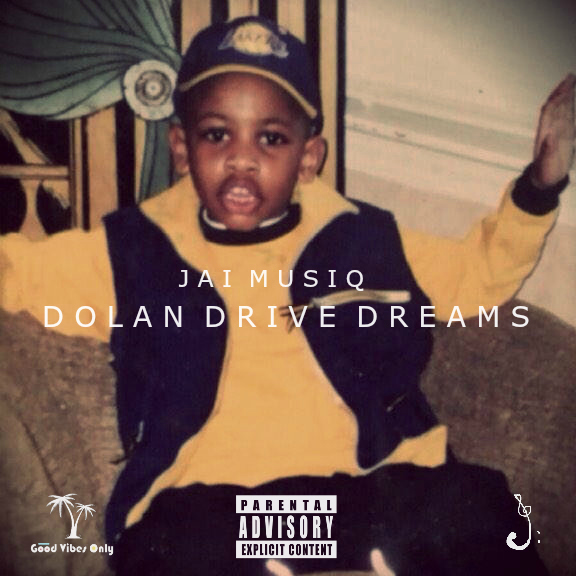 As a guy that basically has whatever the musical-form of A.D.D. is…I got interested in this new record from Jai Musiq early on, right in the “Wake Up! (Intro)” before I even had a chance to hear him rap for the first time.  He’ll get to it…even on this first intro-cut…but smartly adding diversity and versatility to the ideas immediately on Dolan Drive Dreams, he’s got a solid-set of samples to switch through before we get to hear him on the mic for the first time.  As he flips through the dial in search of the beat he’s looking for…the intro already manages to capture the interest through the stunning sounds he’s chosen.  That like…muted-saxophone…whatever that is…sounds awesome as the beat-repeats and we get our first dose of Jai Musiq as he introduces himself, what’s brought him here and what he’s all about through a poetic approach to the microphone.  Things like that little-bit of a laugh he puts into his verse as he rhymes add a ton of personality that make you root for this guy early on – his confidence on the microphone is something you can certainly hear, and he chooses the perfect moment to unleash the low-end right at the ending of this cut to make that defining statement on the very first track.  Jai Musiq is here to claim his place in music’s history…you can tell right away from a track like this that Dolan Drive Dreams is going to be an adventure entirely and that this is hip-hop with real thought behind it.

Important to note is that a lot of this record deals directly with the story of Jai Musiq…tales originating right from Dolan Drive where he lived with Dreams of where he’d end up making music today.  And it’s hip-hop, not rap – so when this record takes a decidedly sweetened turn early on in the record with a song dedicated and completely about his “Mama,” you can get where he’s coming from.  You get a lot of insight about an artist from a track like this, which really details the honest feelings of love for his mom perfectly while still making a song that’s got credibility without being cheesy.  I mean…it’d be hard to bag on a guy for writing a song as sweet as this…you’d have to be one kind of grade-A A-hole to not at least appreciate what he’s written here.  There’s a tone here or two in the vocals that maybe needs a little bit more strength, but other than that, it’s a sweet melody and mix that guide this track to success.  Well…that and the best guest-appearance on a track I’ve heard this year with authentic mom-messages that really shine a bright-light on what a beautiful & inspiring personality she truly is.  “Mama” – you made me smile.  And your son…he’s making you seriously proud on a tribute-track like this.

“Fly” brings up the low-end right into the thick of the mix…by nature, the whole song becomes really HUGE in its overall-sound, but also by the same traits that create it, also take away slightly from the versatility in the music of this one tune.  You can hear other elements in the music…they’re there…but they struggle to break through the dynamics of the low-end to really become pronounced.  There’s definitely different reasons for making music of all-kinds…some people really just want to roll around town and let people know that the music they’re listening to has some bass in it somewhere (you know, by cranking it up as loud as the system can handle) – and if that’s the intent behind this cut, job well done.  Otherwise…I felt like the choices in the mix of this cut partly hindered the end-result…I think Jai still shows up with a solid performance in the verse…I’d be looking for him to push that energy out a little bit more in the chorus though with the mix being as large as it is.  “Fly” feels like it’s missing that matching gigantic energy here to rise up to the challenges of the massive low-end infusion.

I also think that when “Get Away” starts right afterwards, what I’m talking about in terms of the dynamics and separation of sound start to come around again.  With bright samples and sounds in the mix…and a lot less of a low-end rumble, “Get Away” makes the case for this style in the production where each element of the music stands-out and pops just the way it should.  Jai rhymes impressively through this cut…sounds a lot like Wiz Khalifa on this particular cut, and notably, he also does his own hooks in the chorus too.  That’s always important to notice in my opinion…I got mad respect for emcees that try to tackle both a rap & singing role in their music, though quite often you can also hear where the true strengths lay in the vocals as you hear them.  “Get Away” has maybe a tinge of that, but not much…for the most part, it’s a solid lyrical wind & grind through a ton of observations on a life of love – and the chorus hook is as smooth as it gets.  We might trade a little bit of energy & tone for the overall result…just a bit…but I’d willingly trade it for the idea in the writing here, I think the hook is super-strong on “Get Away” and the verse is sharp & on-point throughout – solid cut.

“Tonight” turns the auto-tuner up…the low-end creeps up again in the mix…and between the two, these elements make the overall track a bit lumpy.  Idea-wise, I think that Jai’s got another good one here…even the simplified and stretched-out chorus would work well.  Auto-tuner is a sick-beast and tough animal to tame…as I’ve mentioned several-times, just ask Kanye.  Dude gets millions to use it and still has no clue how to actually make it work properly, relying on what sounds damn-near like luck when his own tones match the ones set to be sought-out in the programming.  Depending on how closely you listen to the chorus, you’ll get different results.  If you were in the other room and this was on loud in the room next to you, you’d hear the idea – and you’d be satisfied.  If you listen up close, you can hear that churn in the auto-tuning as Jai sings this one…a bit distracting from what otherwise would have been a winning idea here I think.  Not often I’d recommend this to a hip-hop artist or rapper…but in that chorus I think you’d be looking for something a lil’ less Weezy and more like, I dunno, Sting?  I just suspect that Jai’s natural vocal-talents untainted might have paid off more for him on “Tonight.”

But in mentioning the whole thing about taking on the chorus-hooks, I’m also commending Jai Musiq for taking real chances, but also pointing out that the versatility and diversity does exist on this record from track-to-track as it plays.  Even a short track like the “Penthouse Interlude” proves that…heck, even within its own short two-minute time-frame this song has a whole bunch of ideas that work well.  Right around this point in the record, Jai’s sounding great – confidence and energy are way up on this complex rhyme that he delivers on-time perfectly.  It’s the shortest cut on the entire record, but don’t underestimate this track – “Penthouse Interlude” is a highlight for Jai’s lyricism and designer-flow.

What I do really like and admire about Jai Musiq’s music is the meat on the bones of a track like “Spend The Nighttt” – I mean, really, listen to the wordsmith in this guy.  It’s not just that he can express himself in words – you can hear he continually challenges himself to find the RIGHT words.  Metering-wise, he’s always on…but vocabulary-wise, this guy is holding nothing but aces in his hand when he writes a verse.  Really clever use of flow and pace that really shows he’s taking the time to find the words that really do fit the flow and style as best they can – and I think you can hear that perfectly in the way he slides, glides and moves through “Spend The Nighttt.”  Dude pivots and bounces electrically off the words in this track…the music is actually fairly minimal here, but the whole song moves at what feels like a rapid pace through Jai’s smooth-style & faultless effort here.  Strong hooks, great mix and balance in the music as well…and…

…hey wait a minute – did that homie just say he’d ‘kiss you down to your butt?’

Ladies…you might want to take notice and think about making that trip to “Spend The Nighttt” – just sayin!’

Great ideas continue to roll out on Dolan Drive Dreams; “You” is another real highlight in the writing of this record.  Adopting a more jazz-like style and swagger for this cut, it’s got a unique intro and outro that are based in poetic spoken-word…and both sides bookend what is really one of the true highlights on this entire record.  I loved the hooks and performance on this track…I think that Jai has his part completely nailed and I think the overall sound is beyond fantastic…something that could potentially set him apart for real here.  Everything about the approach to this idea is executed perfectly – easily one of the most satisfying tracks on the entire record and a real gem overall – there’s a ton of crossover appeal in “You.”

Borrowing a beat from the upcoming presidential candidate of 2020 himself, Mr. Kanye West and re-working a new rhyme over the music that started-out 808’s And Heartbreak back in the day on “Wonderful World” – I think Jai’s made something powerful out of this cut.  It goes in a completely different direction than Ye’s track “Say You Will” – but that’s a good call; it’s not a cover-tune, it just happens to have the same music.  I know there are mixed feelings on this kind of idea…but I think…I suppose as long as you do something new AND do it well, it’s a valid direction in music that isn’t fully explored yet.  Jai Musiq brings a verbal intensity to this track…I think he’s pulled this one off quite well.  My favorite part, even with the strength the verse has, the ending of “Wonderful World” really shines.  Jai just kinda lets loose here…subtly filling in the background with great ideas in the vocal-tones, sounds and filters keeping it real right to the end.

As I’d predicted…this album would be an adventure of some kind or another, and I don’t feel like Jai Musiq has let us down for a moment in that respect.  Right down to the chorus-led composition of “Sleep (Outro)” he’s put unique ideas together and bravely roamed through a ton of sounds, styles and approaches.  Some, just like “Sleep (Outro)” even venture solidly into territory you wouldn’t normally associate with a hip-hop record – but not only am I a big fan of the way he’s chosen to end this, I think he’s lined it up perfectly in flowing into this song from the end of “Wonderful World” and its ideas before it.  It’s a seriously gentle and delicate ending that you won’t expect with “Sleep (Outro)” and I think it’s a commendable choice for the final song that adds real impact to the record overall with a truly powerful idea that takes the entire record in a solid last-twist to the album.

Solid ideas on Dolan Drive Dreams…at points, I think you can still hear the ‘newness’ of Jai Musiq, but there’s no doubt about this being an incredible start that’s full of fresh concepts.  Besides that…a dream isn’t something you stay inside of anyway…even as much as you might like them to…you wake up.  Dreams lead us to great things…and I think Jai Musiq is well on his way to turning those into his reality.

Find out more about Jai Musiq at his official page at Facebook:  https://www.facebook.com/jaimusiq