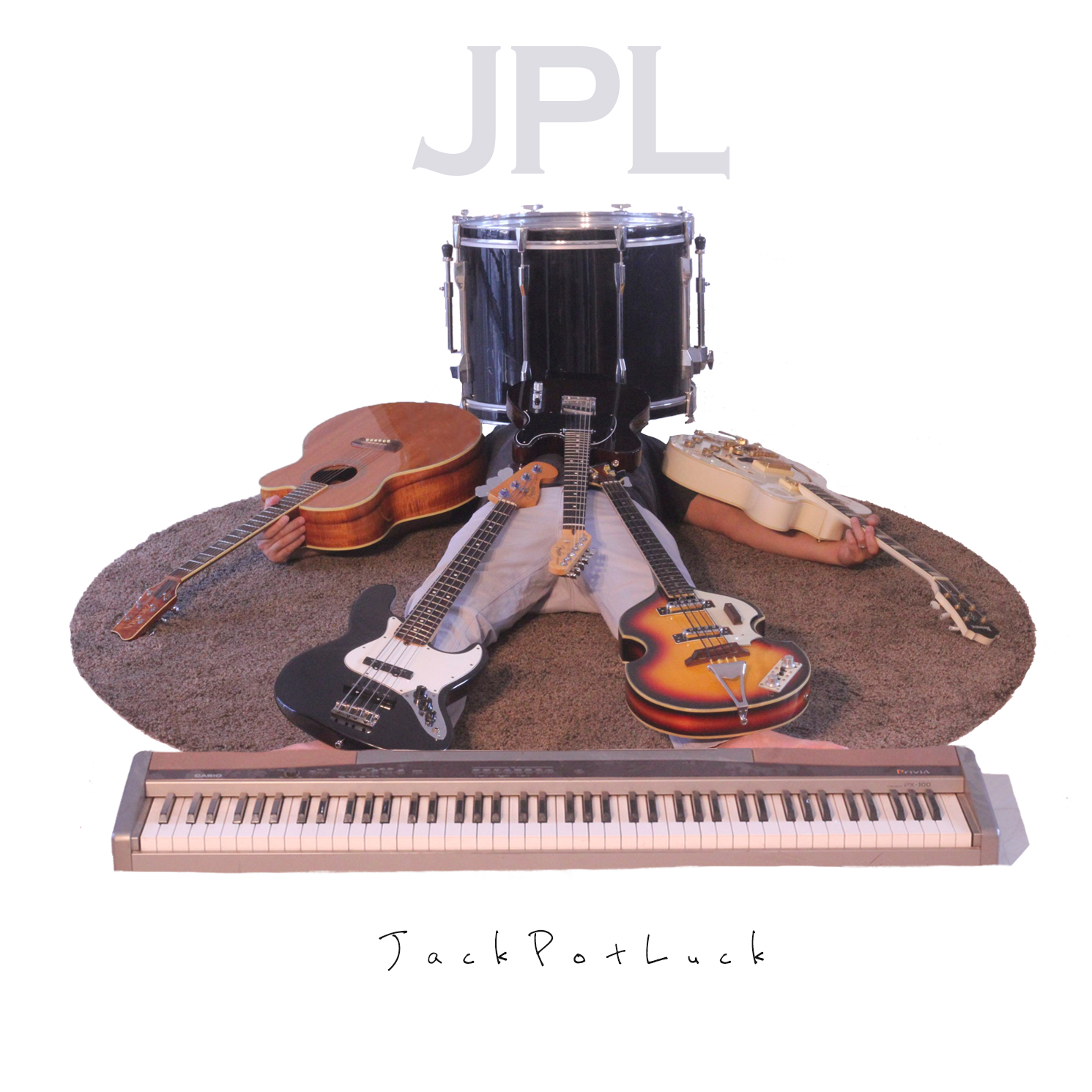 This dude seems to be pretty cool.  If you’ve already seen the latest episode of SBS Live This Week (#048) then you’ve already heard some of the thoughts on the new self-titled record from one-man band JackPotLuck, which is a project helmed by Gary Bonanni.  If not…check that out when you can for a few things you might want to know about that we don’t cover here…there’s a rad story on a bit of the history behind JPL and how it all came to be along with some of my regular rantings & ravings…

To sum it up for those just joining in on our experience with JackPotLuck – it’s taken roughly a decade of incubating this idea before bringing it to life.  Gary should be proud…he’s done everything from the writing to performances to production and plays everything: drums, bass, guitars, piano, organ…synth…vocals…you name it, this guy has put what you’re hearing onto the record himself.  Well…with the exception of “Ugly Garden” of course, which also features his cherished wife/music-partner in the band Just Married – LiLach Bonanni.  So…I mean…Gary’s obviously slacking if he couldn’t take on that ONE other part of his entire album right?  Lazy, lazy, lazy.

Ha!  Of course I’m being sarcastic – what he’s accomplished here is quite extraordinary.  On the first listens through, I found myself more attracted to pieces of the songs before my ears kind of acclimatized themselves to the sound/style of JackPotLuck…and soon enough, I found it was pretty easy to dig on these songs as whole-entities that made unique and perfect sense all of a sudden.  Case in point is how the record begins with “A Clown Around Here” – I wasn’t sure that it wasn’t a little too stuck into its rhyme-scheme for me at first.  Then, I found in the secondary and subsequent listens…that JackPotLuck actually reminded me a lot of artists like Hawksley Workman here…there’s a dramatic approach to the music that makes it have a huge theatrical element to it…like the soundtrack to an extraordinary full-scale musical of some-sort like The Wall or Tommy.  Musically…it kind of plods along subtly before you find yourself enveloped fully in the groove…and from two-minutes & thirty seconds on, “A Clown Around Here” just spreads itself into pure maniacal genius.  I absolutely love what Gary is doing through the guitars and through his vocals here on this opener…it might have taken me a listen or two, but once I ‘got it’ – well, I REALLY ‘got it’ and I was hooked.

Listen to the way he weaves his lyrics and threads them through “The Saddle” – and not because I said so, do it for yourself because you should WANT to hear something as masterful as this.  Gary has really put together a clever tune here if you listen closely…though even at surface-level, just hearing it is nearly just as assured to catch your attention.  That’s the best thing about music though…or, at least in my opinion, it should be.  We shouldn’t be able to absorb everything we hear in a single listening experience or two – we should have these kind of mysteries to uncover, where you don’t hear all the words or a part of a solo…and you get that reason to return.  I think Gary’s done a superb job of doing that on “The Saddle” – it sounds big, it sounds burly…but there are also layers worth peeling in order to find out what’s really in there.  A closer listen to “The Saddle” will prove to be both rewarding and worth your time, this I assure you…Gary gets right into the groove of this one for sure.

Dialing back the rock for a more understated but brilliant moment on the JPL record, is the track featuring LiLach Bonanni as well, “Ugly Garden.”  You can certainly hear how well her voice complements Gary’s…and quite honestly, the performance is a complex and complicated one that is noticeably well delivered.  At less than three-minutes in length, this was definitely a sound I wanted a whole lot more of…I think “Ugly Garden” is a damn masterpiece!  As dark as it is beautiful, the guitars sparkle impressively, but the bass-lines are the true star of the music while the vocal melodies and performances refuse to be outshined by anything.  As it approaches the second minute, all of a sudden, JackPotLuck takes you right into Pink Floyd territory…and with synthesizers filling in the sound, blasts this track right into orbit.  Surrounded by space-like atmosphere and sound, “Ugly Garden” progresses into the fantastic and becomes a sonic voyage much bigger than you’re expecting at first.

But that’s just the thing isn’t it?  Isn’t that the whole magic behind the music of JackPotLuck?  You’ll never really see this coming…I don’t think you will anyhow.  I think even Gary has thought himself to be the underdog at times…it’s in the folklore of this album that these very six-songs almost never found their way to a record.  I’m glad they did!  “Head Full Of Stone” for example…is another song that I wasn’t quite sure of at first, but Gary’s progressive approach to the ideas in his writing here cemented another victory in my opinion.  At the outset, it has an extremely playful but unassuming groove…he really puts those vocals almost right with the overall rhythm…and the syncopation between them is nearly a risk.  On the latest episode of SBS Live This Week, we play a bit of “Head Full Of Stone” and I mention it reminds me of like, Lou Reed-meets-Better Than Ezra…I’d potentially throw Primus and Beck into the mix as well…particularly, Primus in the chorus, Beck in the verse…with a resulting combination that certainly makes sense to find on this album here from JackPotLuck.  It’s got a loose, chilled-out vibe and an entire riff that’s practically built on guitar-harmonics…so no joke – this cat’s got skills!  Taking the music into the stratosphere, out of the dark and into the light once again…the mid-section of “Head Full Of Stone” soars before crashing back into the percussion-laden beats of its addictive chorus.

Not much here sounds typical at all…so it would probably make a lot of sense to you to learn that this was recorded in Gary’s home studio, which is apparently ‘a cabin tucked in the back corner of a farm, far, far away.’  There’s a backwoods mystique to it all…I can dig on that.  I hear a song like “Careless Talking” and I started picturing the movie Frank with Michael Fassbender and his group jamming this out in their own cabin out there in the woods, away from everyone and everything…free to make music as pure as it gets.  I know I’m here to talk about JackPotLuck, but, side-note here to you ALL…if you haven’t seen Frank yet, and you’re a musician…well…DAFUQ?  Go watch that…like…now.  Or…you know, after you read this review and after you watch the episode of SBS Live This Week (#048) with the spotlight on JackPotLuck and CERTAINLY after you listen to his new record.

I’m sure all that goes without saying.

The aggression in Gary and intensity of the record takes a sharper turn and becomes more present from “Careless Talking” and forward.  Much of this record has been mired in the dark as it is, whether you’ve realized it lyrically or not…but as of “Careless Talking,” the music begins to grit and bare some gnarly, gnashing teeth to match.  Great percussive rhythms to this tune, and I’d assume Gary’s built up the song from there; much of the guitars and synth respond to the snap of the crisp drumbeats and crashing cymbals…there’s an organ in this one that sounds so damn classic it hurts – like he hijacked it from another point in time straight out of whatever studio The Doors were haunting at the time…

But just in case you don’t believe me that the progression of sound takes this album from whatever light it was holding onto and right down to at least six-feet under – take a listen to the sludgy-grind of “The Feeling.”  I can tell you with certainty that the last thing I expected at this point was for Gary to let me down…and he absolutely doesn’t disappoint whatsoever with this final switch in sound and final tune of the record.  “The Feeling” straddles the edge of Alice In Chains at times…the guitars in this song deserve some real credit…he’s found some amazing parts, but amazing tones as well.  Towards the second-minute, Gary gets all-out GRIMEY with this evil little ditty he’s created here…his tortured vocals sound absolutely spot-on perfect with the surrounding darkness of “The Feeling.”  It’s the kind of performance that, as a vocalist, you’re giving so much of what you’ve got and every ounce of strength to it…every muscle is tensed-up and intense as all-hell…I mean, it can actually make you hurl if you’re not careful enough.  That’s not what they’re implying when they say a dude ‘left it all out there on the floor’ – know what I mean?  What I’m saying is…Gary is more than giving to his music, and “The Feeling” has him at the best of his own 100%, growling and howling amongst an absolutely stunningly deadly & menacing atmosphere.  So thick, so dirty, so grungy and so grimey by its end you’ll want to take a shower – but there’s no denying that this is one hell of a captivating final song and performance from JackPotLuck…no question, no doubt – he kills it right to the album’s final breath here on JPL.

Find out more about JackPotLuck at his official pages: