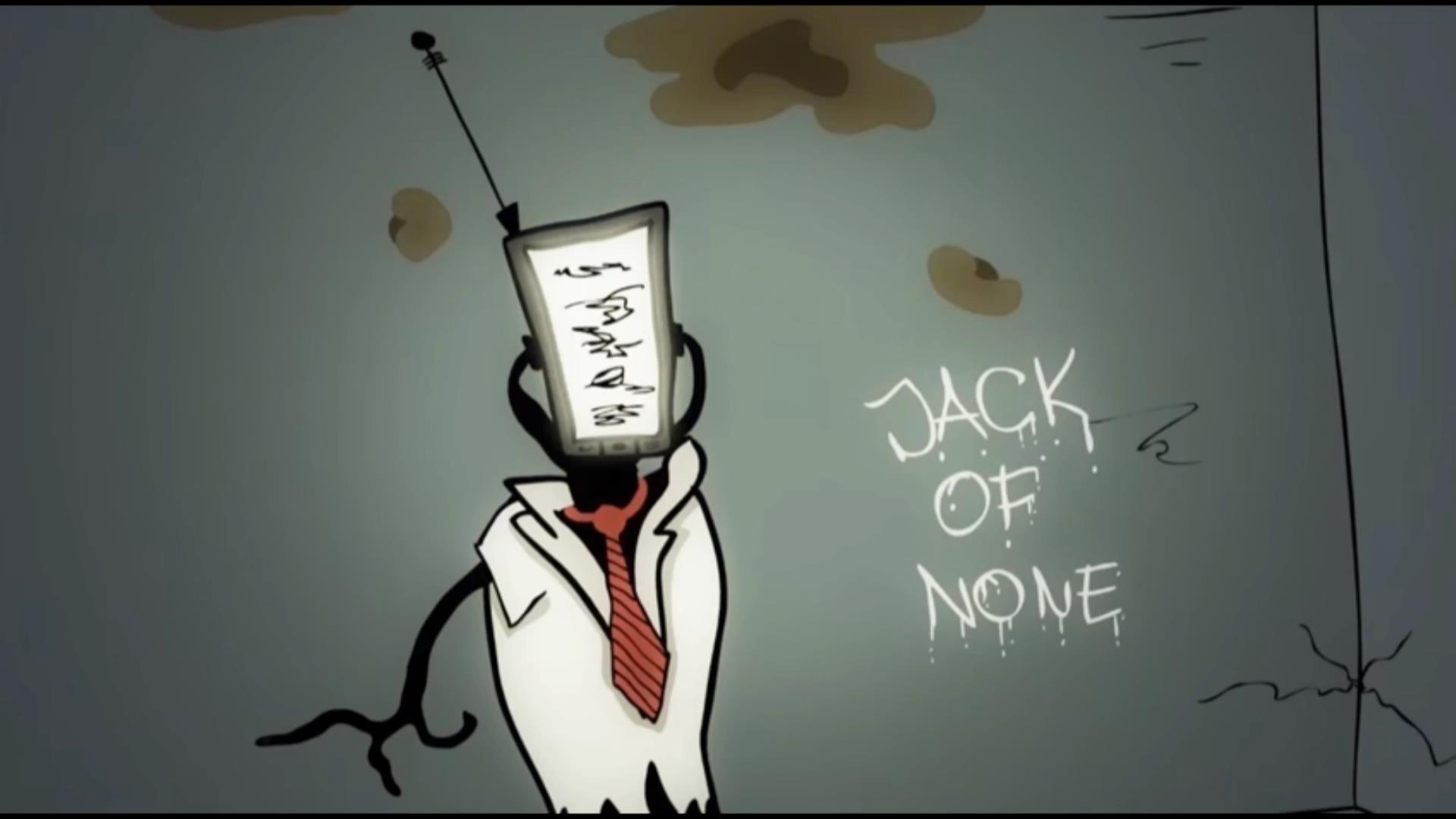 Jack Of None – “The Brainwashers” – Single/Video Review

Alrighty…so…if there’s one thing you already know about me, it’s that I love music, that’s probably no secret to anyone out there.  If there are two things you know about me, chances are the second one is that I love cartoons…like…probably more than a healthy adult mind really should.  You add those things together and it’s damn near a guaranteed recipe for success as far as I’m concerned – who doesn’t love an animated music-video right?  Now let’s take it all that immaculate one-step further into the beyond, and add the incredibly rad, bizarre and powerful music & perspective of Jack Of None…and I mean…c’mon…what else could you possibly want?  After I watched “The Brainwashers” for the very first time just the other day…first of many I should add…I came out wanting this video, cartoon & concepts to become an entire show and its own television series – then I could binge watch & listen to this awesomeness all day long.

“The video presents audiences with a surreal, dystopian vision of a world wherein humans are twisted into monstrous creatures by politics and social media.  We’re hoping the video is able to tread the line between cute + accessible, and twisted + socially relevant.”  I couldn’t have said it better myself…so there you go, I chose not to – that’s a direct quote from the Jack Of None camp about “The Brainwashers.”  Many of you out there already know I completely dig this song and think it’s an excellent choice for their new single – if you don’t yet, make sure to check out my thoughts on “The Brainwashers” from the full review of their second album, Who Shot Bukowski?, from earlier this year.  Seeing a song you hear so much potential for blossom into onscreen visuals like this…I don’t honestly know if I can even begin to explain the feeling…”The Brainwashers” video came out so perfectly matched for the mix of mischief & insight you’ll hear in Jack Of None’s music & words that it just makes me smile from ear to ear.  I’m stoked for this entire crew…because this is what a job well done definitely looks & sounds like.  It certainly seems that at every opportunity Jack Of None finds to up their game, they choose to.

Enlisting the incredible talents of Ivan Ilić from Serbia was a brilliant call made by the band here.  According to these notes I’ve got here in front of me, legend has it that the band and Ivan immediately bonded over similarly twisted taste in music, film and literature…it certainly makes sense to me that like-minded artists would find themselves inspired to work with each other like this collaboration quickly discovered.  Ivan’s vision for how this looks…is perfect.  How he chose to represent the lyrics onscreen…I mean…the dude nailed this from every possible angle and got to the heart of the message to bring it starkly across in a bold cartoon that’s as straight-up compelling to watch as the song is to listen to.

With the incredible visuals and animations bringing every stylistic syllable from lead-singer Maxine Syjuco’s lyrics & vocals to life alongside the absolutely wicked dimensions and depth of the music performed by brother A.G. Syjuco in “The Brainwashers” – I’m not just being an obsessive fan in proclaiming this is one of the best single/video combinations you’ll see/hear this year – I’m remaining entirely objective and just telling you like it truly IS.  I mean…I AM an obsessive fan of Jack Of None…but that’s an issue for my therapist to deal while charging me by the hour; my point is that no matter who you are, what you like or what you’re into – you’ve gotta dig a video/song combination like “The Brainwashers.”  You have to.  It’s like a rule.  Biblical even.  ‘Thou shalt like and give a thumbs-up to awesomeness’ – probably old-testament but I’m positive that’s gotta be written in there somewhere.

Total triumph here if you ask me…and additional confirmation that Jack Of None continues to head down the right path with their art, music and career.  The video for “The Brainwashers” backs-up the powerful statements, opinions, insights, perspectives and apt-truths laced within the lyricism with absolutely wicked animation, vibrant colorizations and clever imagery, concepts and themes that capture the spirit & essence of their penchant for mischief, menace & mayhem in music.  Jack Of None has always been bold enough to put their perspective out there in the world for all to hear it – and their new video for “The Brainwashers” gives this song the highly-imaginative & exceptional visuals to match.  This collaboration of artists between Ivan Ilić & Jack Of None completely hits the mark of its intentions; the song is awesome, the video is rad – and the overall completeness of an idea like this is what it really takes to get noticed out there these days.

Find out more about Jack Of None at their official homepage:  http://jackofnone.net/

Tags: Jack Of None Singles sleepingbagstudios The Brainwashers