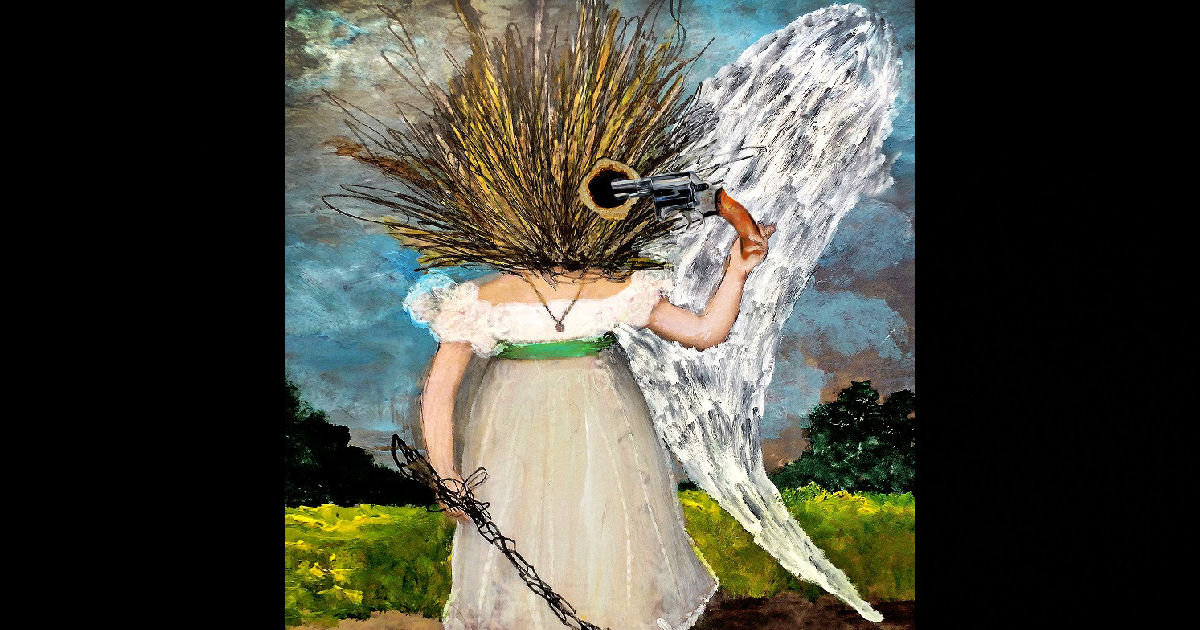 Sorry guys…I would have had this out sooner this morning but there were a few obstacles in my way.  You see, upon realizing that I hadn’t heard anything new from Jack Of None in 2018 sent me into a wild panic attack the other day thinking that I might get to the end of the year somehow without MORE from the endless badass, darkly experimental, and highly poetic band of pure radness in art-music.  I mean, what on earth would that be like – and WHY would anyone want to go through a year without new songs from this incredible band out there in the independent scene?  I haven’t known for two years since they released their debut Who’s Listening To Van Gogh’s Ear? – and I don’t intended to find out if I can help it!  I’ve had their latest ever since from the release of their killer lead-single/video “The Brainwashers” to the release of their follow-up record Who Shot Bukowski? in 2017 – but aside from spinning them a couple times from our side on the SBS Podcast, it’s been a quiet year for the band here at our pages.  And ain’t nobody got time for that!

To calm me down thankfully, somehow sensing my musical desperation, Jack Of None have sent through their lead-single “Michigan Ex Machina (She Wasn’t Me)” (from an as-yet-unnamed third album coming out in 2019!) before the year is up…and the panic subsided.  Then of course it turned into the opposite-effect – complete elation; it can be incredibly tough to write a review when you’re bouncing off the walls in excitement about a new song from one of your favorite bands/artists…you might not know this yourself, but I’m sure you understand.  So thanks for your patience – I appreciate it.  Let’s get to this!

What I will ALWAYS love about Jack Of None is the massive degree of genuine surprise this band is capable of – it would be theoretically impossible to predict what they will/won’t do next based on anything you’ve heard in the past…it might be painstakingly poured over and hours & hours have likely been spent in putting it all together, but it’s always music that’s authentically in the moment, and fresh.  It’s fair to assume you’ll get a mix of wild creativity and poetry combined – that much is likely going to be true of Jack Of None forever, that’s the main identity of their music – but when it comes to HOW they’re going to make that happen or what their latest ideas will sound like, you absolutely never know.  And I LOVE that.  You should too.

You could sense a metamorphosis in action when they released their last record…or at the very least, what you could only assume is the natural progression of evolution within a band that has no limitations and the talent to take on their most ambitious ideas.  But you could hear it.  I think now in retrospect that you can hear their first record draws a lot on A.G. Syjuco’s past experience in music…resulting what’s perhaps slightly more guitar-driven by comparison to that second album.  And even though I might have been just a bit more partial to their initial debut, a lot of that is due to the memory of the pure shock & awe of hearing such an amazing new sound within the independent scene…a band that was finally able to combine true poetry and music in a way that I genuinely wanted to hear.  But with Who Shot Bukowski?, I felt like I was able to appreciate that the music had taken on a more expansive range in sound…like you could hear in the background of this story that A.G. was exploring his own capabilities & creativity like never before in order to unearth entirely new combinations in sound that most people – artists & bands included – could never even hope to dream up at their very best.  All bands evolve…or at least, the great ones do…and in that process, there’s both good & bad – sometimes things work, sometimes they don’t – but regardless, you can always hear whether or not that band or artist you loved listening to in the past is on the right path forward…that’s what that second record was like for me when it came to Jack Of None.  Still love the record and I knew they were on solid ground, but you could also hear the changing gears beginning to steer the music to a wider range of potential sounds & sonic adventures, which again, is a great thing in many ways.  It leads to moments like this.

Because every so often in that evolutionary process, when those real breakthroughs occur – it’s like the equivalent of skipping from grade ten to college, or getting promoted two or three steps above the current position you’re at in your job…things click somehow, sometimes explainable, sometimes not – but again, when it comes to music, you can hear it.  And it’s in saying ALL of this, that I feel like I can vouch for “Michigan Ex Machina (She Wasn’t Me)” as possibly being the most exciting track I’ve heard from Jack Of None since their initial debut…this sounds like that next-step.  Like I said, I ain’t slighting the songs on the last record – there’s exceptional stuff there – but if we’re talking about that initial impact, that noticeably memorable switch in sound, that jolt of inspiration on immediate display – that’s where the difference is made here.  Especially if you’re already familiar with the music of Jack Of None…like I said at the very beginning, you NEVER know what to expect from this band apart from quality & commitment – and they prove their unpredictable nature once again with the music on their brand-new single…this is brilliant.

Were you expecting the opening jazzy/smoky-lounge style music starting the new Jack Of None tune?  Probably not!  Will you LOVE it?  HELL YES!  Who couldn’t love this?  The bass alone will grab ya with its solid & smooth groove supplying the backbone of the beginning of “Michigan Ex Machina (She Wasn’t Me)” – and believe me when I say there’s just about a million more reasons to love it even more from there.  The organ/keyboard melodies that run alongside the beat & bass-lines for example – those are freakin’ genius on every level…like there’s a truly incredible amount of style & atmosphere goin’ on here that can’t be denied…A.G. has done a masterful job at setting the mood for his sister Maxine to fully deliver when it comes to the vocals, which of course, true to form, she does.  That familiar vein of poetry comes through perfectly like hearing from a long lost friend – and lyrically, even though I wouldn’t even pretend to know the meaning behind each and every word from such a profound artist/writer – to me this was Maxine at her absolute best.  Not only are the words of this poetic tale incredibly engaging, but considering the title of “Michigan Ex Machina (She Wasn’t Me)” – the approach she’s taken here draws on a killer mix of nearly robotic delivery and an intensely-subdued wildfire of passion.  You can take passion for however you want to – you’ll hear what I mean…that slight human-edge that breaks through this precisely calculated performance – Maxine’s like a master of ASMR…I could listen to her read the phonebook and never get bored honestly.  She mixes a cold-robotic sound with an undeniable burning-rage hidden underneath that sounds like she could lash out at any moment, even at her most chill…the control on this performance is seriously amazing.  Listen to parts around the 1:30 mark…or around 1:50…these moments of humanity breaking through the mechanically-inclined atmosphere surrounding here…it’s really smart stuff – which you should always expect from Jack Of None.  But like, for real – listening to her describe a dude just trying to bum a cigarette will have you gripping the sides of your speakers listening to hear if that dude is gonna make it out of that situation ALIVE.  Lyrically, I think it’s on another-level entirely and absolutely without question one of the best I’ve heard from Maxine’s amazing mind; the imagery is incredible, the delivery on the words gives them a haunting, mysterious, and eerie feeling.  Much of what she’ll describe is beautiful…or at the very least, a beautiful way of describing some fairly dark territory…as the song heads past the eighty-second mark you can start to feel that beauty in the words and music twisting, transitioning…to the point where you’ll be holding your breath right as “Michigan Ex Machina (She Wasn’t Me)” explodes just prior to its second minute in a full-blown mechanical blaze of machine-like glory.  LOVE what’s happening here from the added presence of the guitar and the wicked riffs that come with it, to the whispered & emotionally powerful moments from Maxine on the mic, to the mix of the music itself when it’s at its most challenging to contain – it all works insanely well.  And yet somehow, I think my favorite moment might have even still come afterwards; that shift out of the intensified middle madness of this tune and beginning of the smooth stroll to the end was an equally effective part of the song that snaps up our attention perfectly.

Switching it up with a quick piano interlude and sliding right back into the groove of the beginning so slickly & sleekly like the wildness that had occurred only seconds prior NEVER EVEN HAPPENED, Jack Of None stylistically delivers pure victory throughout this entire track, right to the very end – and gives us an enormous reason to look forward to next year already.  “Michigan Ex Machina (She Wasn’t Me)” is deadly on all-fronts from the music to the microphone, and they nail the ending of this song as just impressively as it truly began.  I feel like they’ve pushed themselves creatively, I feel like the methods & means of HOW they make their music have likely tightened up as well…all-in-all, I feel like we’re about to be in for one seriously killer new record from Jack Of None next year if “Michigan Ex Machina (She Wasn’t Me)” is any indication.  This is the band at their creative best and most inspired to challenge what we know about music – it’s always had a whole lot more potential for what it can offer our ears than just another verse/chorus/verse.  Jack Of None is absolutely one of the leaders out there that push those boundaries with enough force to move them, and prove just how much is still possible in the combination of ideas, imagination, art, and music.

Find out more about Jack Of None at their official website at:  http://jackofnone.net/

Tags: Jack Of None Michigan Ex Machina (She Wasn’t Me) Singles sleepingbagstudios