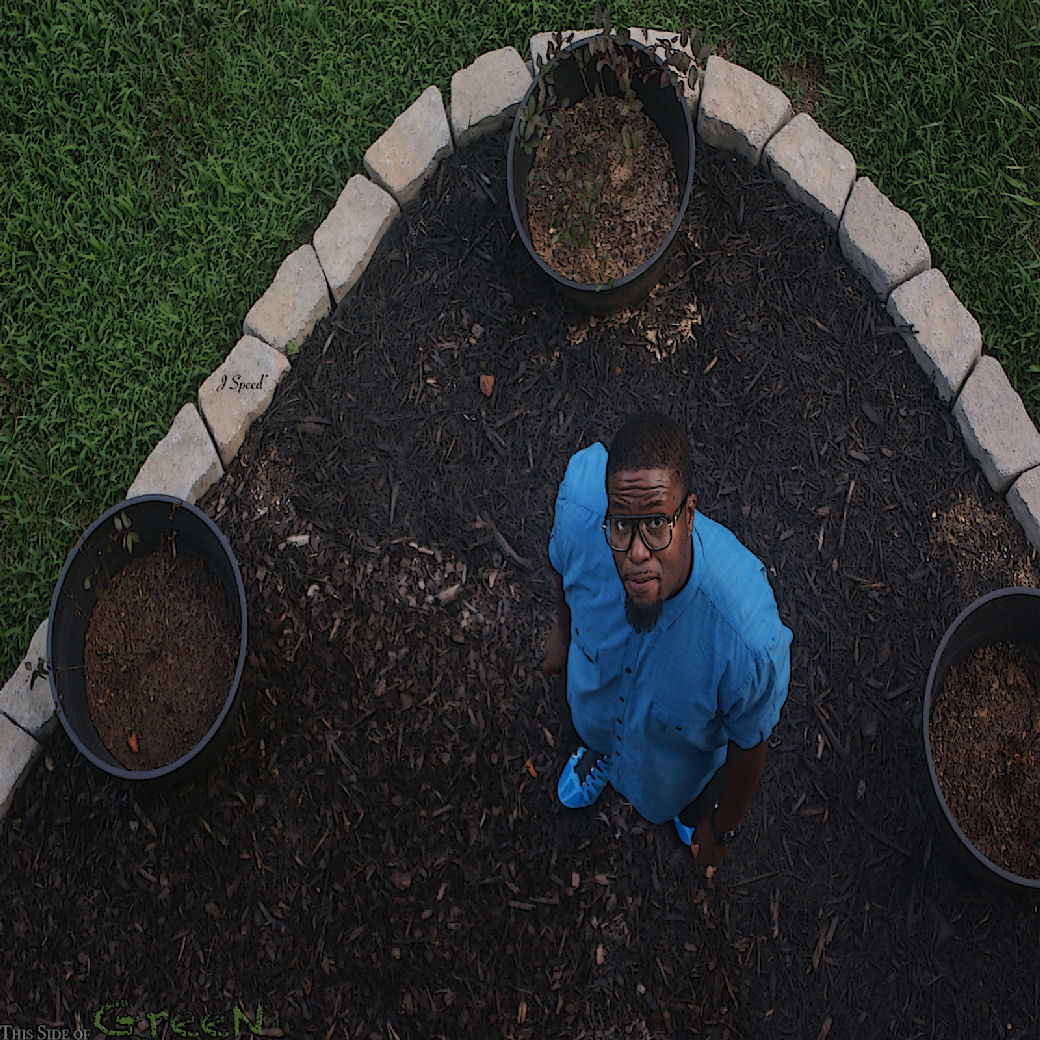 J Speed – This Side Of Green – EP Review

I don’t often reveal this information early, because nothing’s ever set in stone…but if you were to look at my shortlist for this year’s award for Best New Sound coming up in December this year, you’d already find the name of J Speed listed there for his incredible work on his Sehm2yce record released earlier this year, back around the beginning of summer.  Regardless of the outcome on all that, facts are facts – he’s on that list for multiple reasons – this is one of my favorite rappers and easily one of the most lively, dynamic & highly-skilled emcees out there in the game right now.  He’s certainly one of the best new names in Hip-Hop that I’ve learned about & listened to this year.  Back again already like it’s Christmas come early, J Speed releases his second record of 2017, the This Side Of Green EP…let’s check this out…

C’mon.  You HEARING this?  “Photogenics” comes out sounding pimp-smooth…the tone of J Speed’s voice has such incredible amounts of character to it – I could honestly listen to the dude rap the phonebook and never get bored.  He might be back sooner than expected with this EP, but the man has certainly not sacrificed quality in any way, shape or form – the production is tight, the performance is even tighter.  If this was my first impression of J Speed’s music, I’d be blown away.  It’s NOT my first experience with J Speed’s music and I’m STILL blown away – so what does that tell you?  “Photogenics” is a track that’s completely worthy of your time…potentially single-worthy if you were to ask me.  Pacing and professionalism reign supreme on this opening cut as J Speed gives us a solid dose of his most stylistic side verbally, leading the way through this track with delivery designed to entertain your whole face.  Not just the ears…I’m serious…your whole face.  You’ll get right into this – and quickly.  His flow in the verse is completely flawless and massively catchy – a highly stylistic opening to This Side Of Green and strong cut that’s pretty much guaranteed to have you continuing on into the rest of the EP…that’s the kind of track you WANT up front on a record, ain’t it?  “Photogenics” is so enticing to listen to it’s like audio-entrapment for your ears…ain’t no way you can get away from this one once it starts up.

“Couple Days” has J Speed hitting up the verbal hooks in a more noticeable way…more energetic and amped-up in his performance than the smooth-chill of “Photogenics” – the man is in full-swing here.  Ripping through bar after bar & verse after verse, the balance he’s achieved here on “Couple Days” is noteworthy; due to the severely clever pacing and structure of this cut, it never stops moving and keeps the entertainment-factor supercharged as the song moves from verse to chorus without feeling like it’s missing something.  Know what I mean?  I often criticize songs that don’t have enough definition between the verse and chorus…there are exceptions and this is one of them.  While “Couple Days” might stay in the direction it starts in musically, what J Speed brings to the mic in each of this cuts main parts gives it that separation and definition we’re looking for…and he’s basically doing that unassisted.  What I tell you?  Pass this man the rock & he’ll take it straight to the hoop & drain it every time.  There’s a real respect for the old-school buried hard in this cut, especially in the verse…overall, some of the biggest hooks on the entire EP are found in “Couple Days” – the music is vibrant, but it’s that insightful way that J Speed uses the beats to punctuate his lines that continually makes that huge impact needed.

You might look at these songs on paper and figure that by the length, you’d get short songs that still contain a bit of filler…maybe some instrumentation…maybe find SOME way to get J Speed a little time off – but that’s just not how this guy works.  He’s in it full-time; from the moment he steps into a track, he takes over confidently from there like he does on “Ovations.”  I suppose that’s SOMETHING I could potentially say or point out…maybe a bit more of a spotlight on the beats themselves wouldn’t hurt…but I’m certainly not arguing against the way that J Speed’s music is coming out right now and couldn’t possibly think of even coaching him into better results than he’s already achieving.  He’s in full-control – tracks like “Ovations” prove that as he steps to the mic and proceeds to make the magic happen yet again.  Ever the consummate entertainer, J Speed puts in an electrifying performance on “Ovations” pushing out lyrics that speak on personal experiences and what’s happening out there in the world.  Of all the tracks on the record, I felt like this middle cut ran a bit deeper than the rest did…J Speed sounds intensely focused on this cut and it certainly makes all the difference in the world to hear how invested he is in every moment.  It might not have the most accessible hooks on the EP, but “Ovations” will hold up…it’s the kind of track that adds a lot of strength to a record even though it might not be the first cut to grab your attention.  It’s consistent and reliable the whole way down, executed with the same combination of heart, skill and quality you’ve come to know, love and respect from J Speed’s music.

Flexin’ verbal muscle and all-out lyrical-dominance, J Speed is right in the thick of the flow and feelin’ the vibe on “Debris.”  The degree of skill in his flow is SICK…just SICK…there’s almost no other way to describe it…the way he ducks, sticks, moves, weaves, jabs…he provides knockout punches through verbal combinations that land straight onto your dome at full-force; he’s a prizefighter in his own ring.  Much like he did on the Sehm2yce record, the tone of his vocals is SO DAMN REAL and so stylistic you can’t help but love it and how it literally sounds like it’s being scratched on a record through the way he rhymes and uses every syllable to his advantage in his signature style, sound & complex lyrical-flow.  I’m sure I must have made a Busta Rhymes comparison in that last review somewhere…I certainly hear the influence on “Debris” without question – but in my opinion, that’s about the best company you can keep out there in the rap-game any day of the week.  J Speed knows how to really pivot, shift and move these words effortlessly through the bars in a way that gives everything he’s spitting the space to be heard – and in my opinion, when you put rhymes together this intricately, this smoothly, this tight…well…those words SHOULD be heard right?  The effort & work has been put into every moment…that’s just how J Speed does his thang and it certainly speaks to the level of professionalism and quality you can expect from this emcee every time you hear him hit the mic.  I still think “Photogenics” brings a lot to the table as the EP’s potential lead-single…but…I could definitely see J Speed pushing all in with “Debris” – the man’s on fire here, ripping rhymes fast & furiously and putting his lyrical A-game up front & center.

At only 1:36 in length, you’d almost assume that J Speed has included an outro or throwaway moment at the end – but this man brings it to the bars for every single second that ticks by.  You’ll never catch J Speed sleepin’ on nothin’ yo!  I mean…he takes off the first ten seconds (sheesh, slacker!) of the final track “KnowAbouDat” & then never let’s go of the mic for a moment from there.  Set against a minimal environment, right where the sound and tone of J Speed’s vocals always make their intended impact – dude just continually shines brighter than any of the awesome dynamics you’ll hear in the music.  That’s no slight against the man’s beats – they’ve all been wicked – it’s completely a comment on how J Speed raises the level of anything you’re listening to by adding his signature-smooth vocal-flows into the mix.  The music will be 100% completely entertaining you on ANY track you’d listen to from this guy…but that moment he picks up the mic and starts rhyming, the rest almost fades away.  Some artists truly just have that ‘it’ factor – J Speed is one of them and that’s why every time you hear him rap, it’s captivating.  He takes the time to connect to his material, perfect it, record it and send it out in immaculate condition to the rest of us…the least we can all do is take some time to LISTEN.  Do it for yourself!  It’s okay to be selfish here…if you wanna listen to what it sounds like to listen to an emcee at the top of his game, then you GO AHEAD and treat yo’self to some J Speed!  Go on!  Don’t feel bad about it…your ears deserve it!

Tell you what – I’ll help you out so you don’t have to feel so guilty about enjoying yourself so much.  Expect to hear some of the new J Speed on the next episode of the SBS Podcast coming out later today – I’ll play one of the cuts from This Side Of Green and let you in on a bit more info about what is CLEARLY one of the best rappers/emcees/entertainers/multi-talents out there on the scene right now.  Seriously – don’t get caught sleepin’ on this guy.

Until then, find out more about J Speed from the official links below!

Tags: EP J Speed sleepingbagstudios This Side Of Green