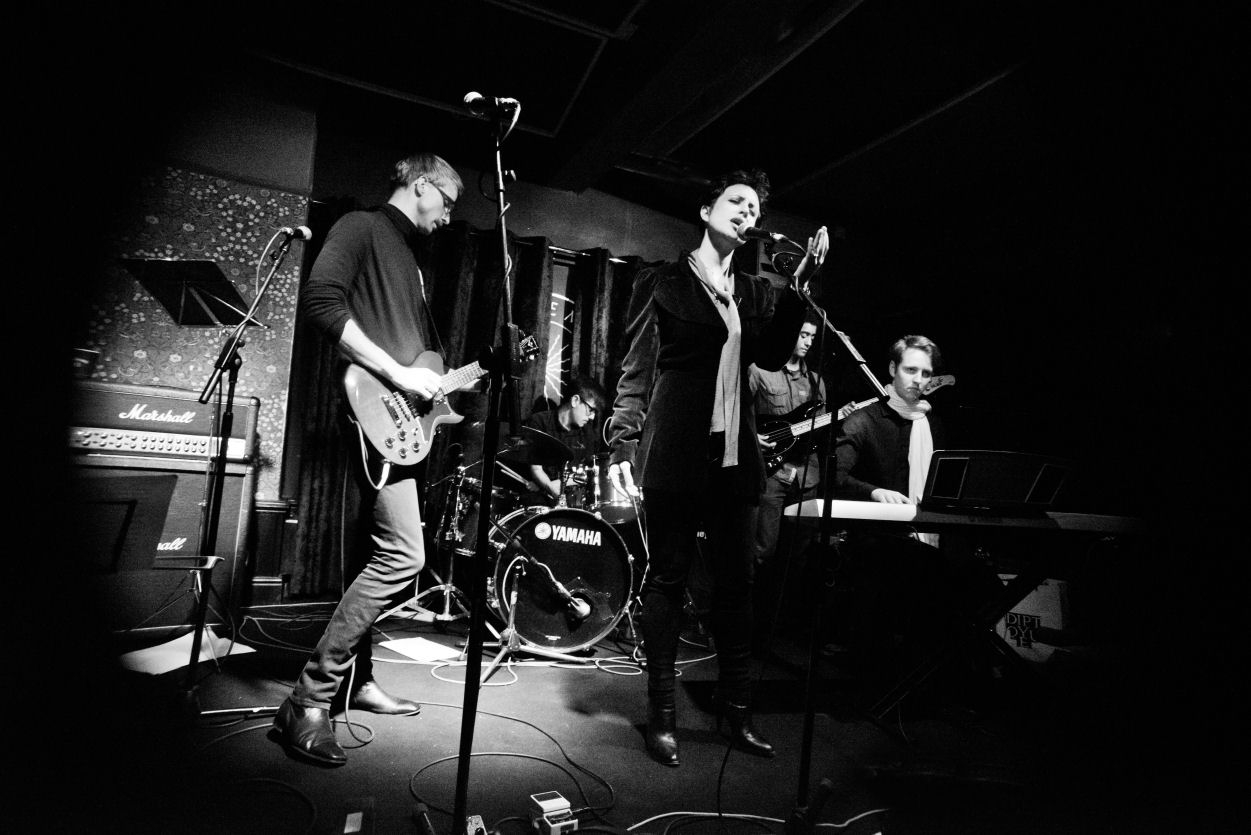 Interview With Santa Semeli And The Monks

SBS: Thank you so much SSATM! Appreciate you stopping by our pages! For those that don’t know about you and your sound already, let’s get a bit of history…how did the two of you meet and how would you describe the sound of SSATM?

SSATM: Hello! We are a London based music group who set out to produce good music. Haraldur and I met during a short film I directed him in and we started writing songs together a year later. Since our formation about a year ago we produced two independent singles and an album under our own label Cosima Music. Our sound is eclectic and diverse. And I think beautiful.

SBS: Santa…you have been compared to some of the all-time greats like Patti Smith and Kate Bush to name a few…I’m wondering if being compared to such giants of our musical history puts more pressure on you somehow? You’ve already put out an impressive catalogue of over 70 songs and are surely working on more already; but with comparisons like these…do you feel like you have to have a high expectation of your own work? Is there still a kind of freedom found inside of comparison?

SSATM: I don’t pay attention to these comparisons. People don’t really know how to define me and it makes it easier for them to have a comparison as a point of reference. I have high expectations to continuously better myself. I want to reach my maximum potential. There is no finishing line…the process is ongoing until I suppose one day I ascend.

SBS: You also have a lot of world-experience through where you’ve lived and where you’ve played. You’ve hit stages in Iceland, Cyprus, Paris, London, New York, and no doubt many others. Tell me what you’ve found out there in the world that makes you love playing in places you’ve yet to go before; and for comparison…tell me about what you love most about playing that first show back in your hometown after touring across the globe.

SSATM: We love playing everywhere because when you’re on stage you already transport into a different world and hopefully your audience joins that journey. But I particularly loved playing Paris and New York.

Paris because there is a long tradition, and therefore a high sensibility and appreciation for good songwriting. The audience there truly loves music.

New York…well for many reasons. Firstly we played our first ever show there, just Haraldur and me, before we had our band. It was special because it wasn’t really planned. But Haraldur insisted and I went along and took him around to check out some venues. The first one I showed him was Pianos and a guy there saw us and asked which band we were with. We told him that we were interested in playing there and asked him who to contact. He replied: ‘Email Steve – that would be me!’ and three days later we played an acoustic set of about 15 songs. I was so nervous beforehand that I didn’t want to play. I said to Haraldur: ‘I’m like a schizophrenic asshole. Hey! Let’s write a song about that.’ So he picked up his guitar and in one take, one hour before our debut show we came up with the song ‘Schizophrenic Assholes’, which is now on our album.

A year later we returned to the Bowery Electric for the CBGB festival with the whole band. It was fantastic! New Yorkers are a great sport and always up for a good party. I lived in New York for many years and we are planning to spend more time there.

SBS: You recently experienced some impressive success and attention with your last single “Arrivederci Bob” in 2014…tell us about where the writing and music have taken you since. With the success you experienced there on that single, did you find that the writing process changed at all during your next recordings? With the influences & references I can see you look up to…writing for the purpose of ‘making a hit’ doesn’t seem like it would be part of the mindset behind SSATM…but perhaps I’m wrong. Set the record straight here for a moment and let us know about what direction you’re looking to take the music in now, and what events or moments led to inspire you to take that direction.

SSATM: Oh, I do love me a good hit don’t get me wrong! And I’m planning to make many. But you can’t write songs with that purpose. Like you don’t make love in order to produce the most intelligent and beautiful baby in the world. You just do it because it feels nice.

We released ‘Arrivederci Bob’ first but it was actually the last song that we had written at the time. We take influences from many artists but you need to be flexible in your form of expression. Otherwise you end up like a one trick pony.

SBS: Watching a video like “Let’s Make Love And Say Goodbye,” which was a live performance on Cyprus TV’s Entexnos program, you really get to appreciate the intimacy of a SSATM live-experience. Then when you compare that to the live-performance you can find on your website of “Schizophrenic Assholes…” well…correct me if I’m wrong but that was certainly like seeing the two sides of a psyche! I can definitely appreciate both of these styles…but it’s definitely got me wondering now…now I want to know about what we might experience if we were to see you live in your current set. Does the current show you’ve got assembled present both of these dynamics in your music? I’m sure there’s more than just the two of course…but I think you know what I mean…do you mix it up sound-wise quite a bit when you’re onstage or do you find you stick to a more cohesive song-list when playing live? How come?

SSATM: We select our program depending on the show. But yes, we have been known to play ‘Lets make love and say goodbye’ and ‘Schizophrenic Assholes’ in one set. The songs simply tell a different story.

SBS: Lyrically-speaking…what do you find are the themes, tones and feelings you write about the most? Are the words something that particularly challenge you, or do you find this is a more free-flowing part of SSATM? It’s often described as poetry – do you feel that’s accurate? What would you say are the key factors that people are picking up on that lead them to a ‘poetic’ description of the words and lyrics; why don’t the critics seem to think they’re just ‘songs’ like they do with most everyone else?

SSATM: I write about what’s on my mind at the time. Some people write stuff on twitter and FB. I just write songs. I don’t know what defines poetry. I suppose a certain kind of care and beauty in how you express something. All our songs have a message and we try to convey it with a sense of humour and brutal honesty, which you’ll find is one and the same thing.

SBS: You also include the mention of several other musicians that have played with SSATM…but haven’t officially put them into the roster of your band – and I’m wondering why that might be? Semeli and Haraldur clearly make up the core & center of this band and its music…but is it possible that one of these other great players might make the official line-up one day, or do you have any plans to expand the band any further in the future? It’s not that they NEED to be official of course…but perhaps the official line-up will ONLY ever consist of just the two of you…what’s your take on that? Clearly what the two of you have shared together through your music has formed an incredible bond…but now that it has, will there ever truly be room for anyone else in that equation?

SSATM: We are open to all sorts of collaborations. I think it’s nice to use local musicians when we travel and bring some fresh air. Kind of like missionaries, spreading new sounds to foreign lands.

SBS: Tell me about music & art combined…your band & music certainly suggest you’ve taken some measures to incorporate a real genuine artistic feel and tone to your music and live-shows…how important for you is it that what you do be considered a form of ‘art’ and not just simply more ‘music?’ How do you go about achieving this visually for your fans as well as you do through your music?

SSATM: The only thing that is important to us is to produce good work that makes life a little bit more beautiful and entertaining. How we do it is our job. You can’t define magic otherwise it’s not magic anymore.

SBS: What are the current goals for Santa Semeli And The Monks? What are the plans for the immediate future? In terms of looking at your careers from a long-term aspect, what’s the biggest challenge you can see yourselves facing in the years to come and how might you be able to overcome it to continue on making your music? What will drive you forward & keep you going?

SSATM: We have a lot of material and want to expand in many different directions. Everything we do is groundwork – a preparation for bigger and better things. Hopefully we’ll be alive to witness them one day. What keeps us going? Having no choice but to do so.

SBS: I have to guiltily admit….I’m in love with this particular question right now…. SSATM – can you tell me about FIVE things you know to be absolutely, positively, 100% true about music?

SBS: Websites! We are, after all, here to help promote your music. Can you let us know where we can send people to find out more about you and your music online?

SSATM: All our songs, including our album are on our website and soundcloud: www.santasemeliandthemonks.com https://soundcloud.com/santa-semeli

You can also follow our news on our FB page: Santa Semeli and the Monks and twitter: @santasemeli

SBS: You made it to the end! This is the SBS ‘open-floor’ – a place and space for you to say anything you like or bring up anything at all that we missed. Thank you once again for taking the time and all the best to you two in 2015!

SSATM: Thank you for having us! We are working on a new dance single that will be a lot of fun! Watch this space….