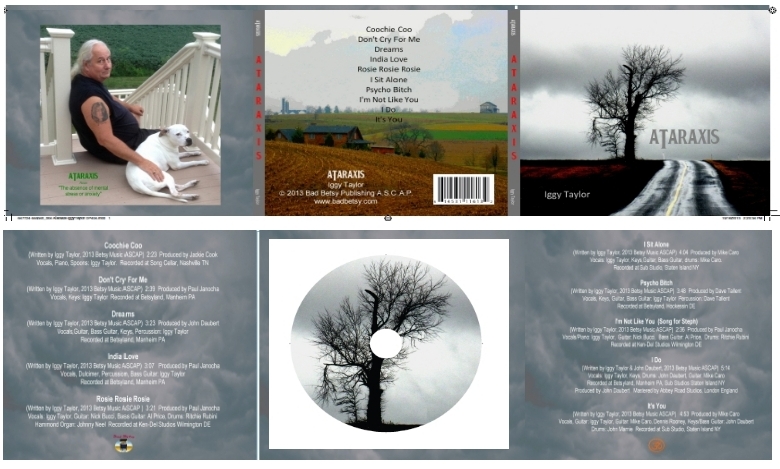 I wasn’t prepared for this. Maybe I’m still not…

Iggy – first off, I want to tell you direct it is completely WRONG of you to make a heavily-bearded man like myself enjoy a song called “Coochie Coo;” brother, that’s just straight evil!

Ataraxis is an extremely interesting album that ranges in many sounds and styles. Iggy Taylor clearly not only has a number of influences but he also listens to music in a way much different than most, but one shared by yours truly…

This album incorporates one major element time and time again – great pop-rock songwriting. Each track has its own flavor and sound, just as each pushes the pop or the rock edge to a certain degree, exposing each as a lighter or a darker sound. The production on the album by Iggy also plays a major starring role as with each touch of the controls, Taylor has morphed himself and his sound from track to track. No matter how much of a musical chameleon he chooses to be – he still understands quite well how to write a hook and music that holds attention with each track that passes.

Now, because the sound varies so much between songs, it’s only fair to comment on what’s working well for Iggy Taylor on this album. For instance, the fact that the sounds and songs vary so much is an achievement in itself. Iggy has virtually set foot into many genres here and created many unique tracks within them on Ataraxis. Musically – Iggy has a tremendous ear for the harder rock edge as displayed on tracks like “I Sit Alone” and “Psycho Bitch” – both of which take the middle of the album and pump it up with some energy where most albums tend to sag.

“I Sit Alone” though I like a lot on an instrumental level; struggles a bit against the high-end vocals of Taylor. The contrast might be a little too far spread to truly appreciate that there is definitely a song here, and a good one at that. Although I like the vocal pattern – his vocals come awfully close to a “Weird Al” sound on this song and I’m just not sure that was the right sound for this particular track.

Production wise, a track like “India Love” just can’t be beat. This track lies in a weird spot between 54-40 and the oldest albums from The Tea Party and it sounds fantastic. Simplistic and clean – this is a standout to me for sure; and Taylor sounds right at home in a heavily filtered vocal melody that fits perfectly with this anthem-style song.

He ends this album on another fantastic piece of pop-confection. The ear-candy comes in the form of “It’s You” with beautiful sections of chorused out-vocals and harmonies and an immaculate guitar tone. The vocal pattern and style that Taylor chooses on this track really expresses some of the highlights in the music Taylor makes. The guitar solos towards the end of this track are out-of-control good and played with an excellent feel and touch, producing forth a tremendous tone and sound that fit perfectly within the song. There’s a common strength you can find in Iggy Taylor’s music from track to track, whether he’s chosen a sound you like, or not.

Cause I’ll admit – I look at a title like “Coochie Coo” and I want to poke both of my eyes in with the closest plastic fork. But I’ll also admit there’s no denying he’s written a catchy song and thankfully my eyeballs remain intact. While the sound effects push it past the point of being taken as a “serious” track whatsoever, the meat of the song is a truly catchy groove that has a classic feel to it. “Rosie, Rosie, Rosie” walks this line as well…again, completely well played but after breaking some truly new ground over the three tracks prior it comes in like an intermission between the chapters of the main event.

And for myself, I’m much more sold on the serious side of Iggy Taylor. “Don’t Cry For Me” is a fantastic example of an epic acoustic track – one that you can hear the passion and depth…that extra 10% comes out big time from Iggy on this track. “I Do,” a Beatles-esque track nearing the end of the album, comes across compellingly honest and real. Focused. It sounds like Badfinger met the Beatles and made the ultimate pop-rock song, another excellent example of songwriting found on Ataraxis.

What I like by Iggy Taylor, I like a LOT. What sounds come out that I’m not as attached to are at the very least is still very well played and written with dedication to the craft and style. It’s tough to always like a range of sounds when we all clearly have strengths and weaknesses in what we record and play. At the end of the day, it really is that range of sound that makes Ataraxis the album that it is and really shows that the best attribute that Iggy Taylor possesses in addition to his songwriting ability is his courage to take on any sound with the maximum musical force he can bring to it, every time.