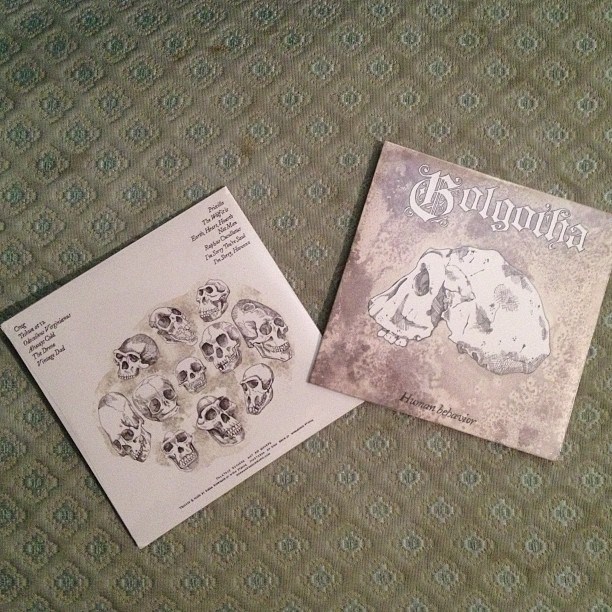 To be completely honest – at many times listening to this new album from Human Behavior, I found myself wondering HOW on earth it was able to retain its immaculate authenticity. It takes nearly all of my concentration when writing lyrics to not write them in a sequence, a chronological order or a story that could be understood by even a four-year old child…I’ll admit quite easily, though I seem to write these reviews quite well – I still have a long way to go before lyrically I’d consider myself to be anything whatsoever original. Today – I’m inviting you to learn about this completely inspiring album absolutely full of originality and beautiful uniqueness. Golgotha by Human Behavior is an awesome effort that will be taken to instantly by fans of “true” indie music…not the pop-influenced “indie” many of us know today from its steady flow into the mainstream.

I’m a firm believer that you can’t fake authenticity…at least not for long. On many an album you can find unbelievable songs that “stand-out” – another way of saying “they got it right,” and nearly suggesting that they didn’t “get it right” in others. Sometimes that’s simply inconsistency, and other times it’s the internal struggle of a band trying their best to create something outside of their sound. It can often lead to an album feeling incomplete – or even worse than that…hollow altogether.

Human Behavior will never struggle with this, never break from their character and as far as I can tell – they’re never going to release music that sounds forced whatsoever. No matter what song you choose from Golgotha – you’re not only going to find unique sounds and compositions well played and thought out – but you’ll EASILY be able to hear how truly genuine this is. I felt like listening to this album was a complete foray into the “new” of music in many ways.

Before this goes ANY further – I want to point out that this band came our way as a direct result of meeting another band we’ve had in review not so long ago – Electrician, also known as the brainchild of Neil Campau. When hearing this band today, Human Behavior instantly struck me as a sound very closely related to what he was personally doing in Electrician and upon realizing that they had been sent to us by Neil…I started to think to myself, ‘This guy is not only a goddamn genius – he’s full on creating an entirely NEW music scene over there on his side of the screen.’
I could honestly rant and rave about the originality of this music for the entire duration of this interview just as much as I can turn up my volume on their music here at the studio – and it is LOUD in here right now! Whether it is through the music or through the words – this music is so right up my alley it parked itself right in my driveway and put itself on blocks so as not to be moved. It has ALL of the elements I love in the truest of the true Indies out there; beautiful melodic music, original invention throughout and lyrically wearing a straightjacket.

I’ll point you to the perfect example of this, coming in at track #5 – “Drone” is such a perfect song that it becomes nearly hard to describe here in fact without sounding like fiction. The music is so incredibly beautiful; well played and sparse, allowing for the fragile vocals of lead singer and band leader Andres along with the four-piece female choir you can find throughout this album. Those two vocal components work fucking phenomenally together. I apologize for the language, but there’s simply no denying how much this music makes me want to stand up on my console desk and shout “Oh Captain, My Captain” towards each and every member that has contributed to Golgotha. I listen to something like this and it provides a personal assurance that creativity and originality are FAR from dead in music. If you’ve ever heard someone tell you that it has “All been done” – you can now officially tell them to go and pound sand. Human Behavior are not simply creating songs about chicks and cars.

The most beautiful thing about this style of reaching so far outside of the box for the wording is that, when accompanied with beautiful music, they’re creating moments in time that will never be duplicated. The kind of moments you will feel YEARS from now and wonder where you remember feeling that same way before, eventually coming to the conclusion that it was that band you listen to….that band Human Behavior CREATED that feeling you experience there in that moment, like déjà vu.

Where is my friend KYLE TRUELOVE of the band AZTEC on this one? Now that this beard of mine has reached a certain length and I’m officially covered in old-moldiness – most of the excellent indie music I’ve been hearing has been the result of my conversations with Kyle about his music and influences…but not today! Today I get to be the champion of this fantastic music by Human Behavior and I can assure you all I am going to put this personally into his EARHOLES because this is something I know that he would more than love, just like I do. Today – I get to tell this particular indie hero about a band he might not have heard of yet, and knowing him to be a true fan of real Indie music – there’s no denying this is a fantastic and complete album from beginning to end. In a nod to the universe agreeing with me – the song “I’m Sorry, You’re Saul” has been playing in the background and while writing that last sentence, echoed their lyrics, “We like the same bands, we like the same bands…”

Deep down we DO. Not just Kyle and myself, but many of our supporters, readers, listeners and viewers are so accustomed to our search for the unique and beautiful, the original, melodic and diverse in sound. Human Behavior displays all of these qualities in this span of their album Golgotha. I’ve had this on a steady repeat and I really can’t get over this constant shock of just how new, but also just home much like “home” this album can feel like. It has nestled itself into my ears like I was simply born to listen to it.

When you research this band through their official site – it becomes crystal clear to me that this IS what we look for at sleepingbagstudios. You know I’ve said it countless times – be a band with something to SAY or with something to PROVE. Human Behavior is one of those truly rare gems out there to have the distinct honor of being BOTH. Not only are they saying completely new things through their lyrics that sound inexplicably close to that of reviews on the latest Mike Doughty album submitted by his fan base, but you can tell that this music is taken incredibly seriously in the background, regardless of the lighthearted sound or lyrics. It is played with a preciseness that is golden and never loses that passion in the execution to ever sound sloppy. This is literally music that COULD go horribly wrong – but Human Behavior have not let a single poor moment invade their music or this album; they’ve nailed it, creating one of the most original and highly likeable new sounds I’ve heard in a very long time.

If you can imagine The Arcade Fire went and sat down with the unchained Modest Mouse of ten years ago, went on a weekend drug-binge and wrote about what they saw on the inside of their heads…that might come close…but that’s about as close as you can get to for a comparison from me. That leads me to believe that this IS in fact every bit as original and uncharted as music can get and I highly commend Human Behavior for their inability to be normal. This has kept my attention in full upon multiple listens, and caused others around the SBS camp to prick up their ears and ask what the awesome music I’ve been playing is and where it comes from. No one is complaining about listening to this as many times as I already have – each time it comes in fully new, vibrant and inviting.

Inviting. That’s a great word for this album. Often things that are outside of our own comfort zones do not have that feeling attached to it, but this entire album Golgotha truly pushes past any pre-conceived feelings you could possibly have and pulls you in through outstanding lyrical imagery and brilliantly played/assembled pieces. I’ve asked many people over my decade of reviewing and interviewing – ‘just how hard IS it to create something that has never existed, never been done before?’ That’s an extremely RARE quality – go ahead and close your eyes and try it now if you don’t believe me! Attempt to invent something that borrows nothing from anything you already know – it’s about the toughest thing anyone can do. Somehow – Human Behavior has managed to create that very something and thankfully they’ve decided to share that vision with us all.

I wish that you could all sit here with me one day and see my bearded face radiate happiness when I find music like this, and I have to crack a sly-smile when I realize that yes, I AM about to post yet another positive review on our site. You already know that no one puts this amount of wordage into a fluff piece, or music that no one could feel passionate about – so once again I ask you to all go out there and connect with each other…to bring the independent scene out of the shadows and into the spotlight it so clearly deserves. Our reviews are positive for one reason and one reason alone – YOUR music is literally that good right now. Human Behavior is a model example of expanding the boundaries of musical genres to create something all to themselves and lead the way in a new and beautiful sound – what’s not to be liked about that when you pull it off as incredibly well as they have here on Golgotha?

Check out the official site, stream and buy the album  here: http://www.punksandcriminals.com/humanbehavior/
Support them on Facebook at:
https://www.facebook.com/HumanBehaviorAZ