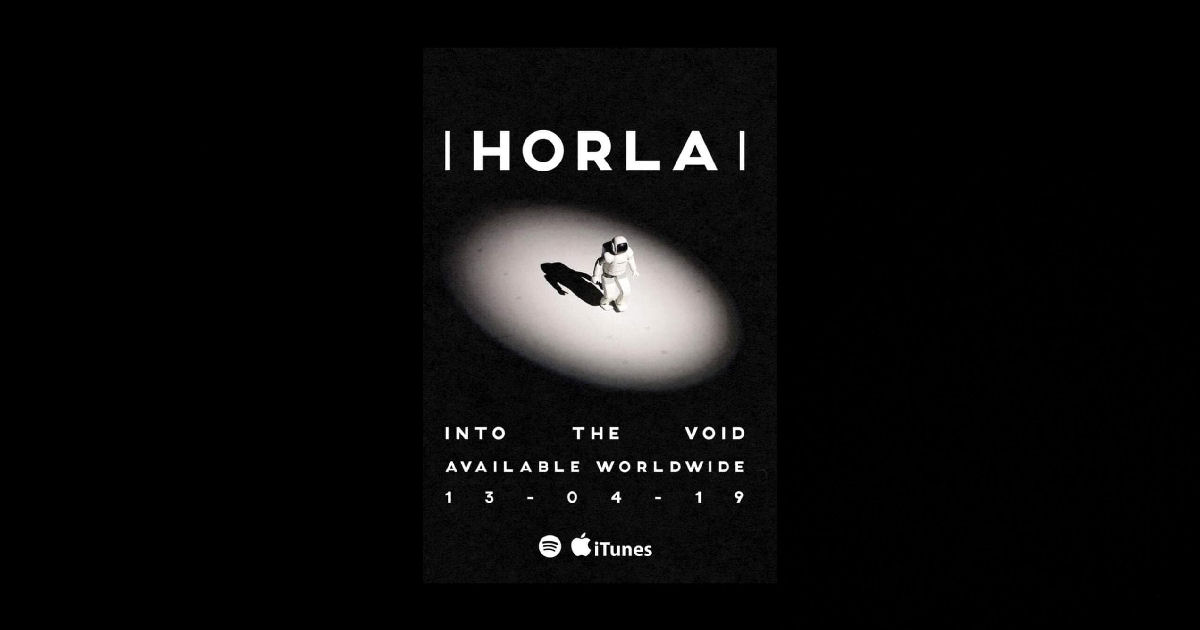 HORLA – “Into The Void” – Single Review

Well look at these guys will ya?  HORLA looks like it’s got four dudes that were born to rock.

Exciting time to be in the band from Manchester, England as well…I’ve been checking out their sites & social-media & whatnot and 2019 has been a milestone year for this band’s career already.  They rocked their first show at the Eagle Inn on the 8th of April…their debut single “Into The Void” was officially released “Into The Void” online as of April 13th…and from a quick scan of their set-list from the recent live gig, you can see there’s still plenty more to come from this band & likely right around the corner.  You see what I’m sayin’ folks?  It’s obviously a great time to be in HORLA right now.

So here’s where it all starts really…”Into The Void” will probably become the gateway track into the music of HORLA for many of us listeners out there.  I’m pleased to report, I’d expect you’ll definitely dig on what you’ll find – “Into The Void” is a powerfully atmospheric & gripping cut that delivers on a slow-burning intensity & gigantic sound at the same time.  Like for real, I’m a fan of so much of all this, that I even find myself somehow digging the COVER ART even more than most singles out there…I just kept staring into it like a lunatic as I was listening, getting lost in the enveloping sound created by HORLA, and drifting off into space in my mind.  So it seemed appropriate that the astronaut dude got the cover spot.

Anyhow…as much as I like to talk about art/photography, it’s the music we’re all ultimately here for to find out about.  “Into The Void” begins with spectacular serenity as it drifts in throughout its first minute, allowing the atmosphere to hint at the build-up & break-through to come, but maintaining its hold on the chilled-out side of HORLA’s sound as the song starts up.  No joke though, I wasn’t kidding about liking it ALL right up to & including the freakin’ artwork…everything stacks up to a seriously solid win and a highly-memorable debut from Manchester’s new Alt-Rock band…HORLA’s here to stay, 100%.  Listen to the punch of the music as they hit the switch just prior to 1:10-ish…you start to hear those guitars expand from their opening mystifying beauty and take on a grittier attitude as HORLA shifts directions and starts to surge in energy.  Credit to the drums as well when that switch occurs and the background vocals as well – these are absolutely essential ingredients on “Into The Void” & why it makes such an impact as it progresses through its structure and keeps us locked-in & engaged at every moment.  Bass is right on the money & the vocals from the smoldering smooth sound of the lead to the stunning heights that the backing vocals reach, are all more than impressive & perfection in their tone.  You feel that sense of urgency throughout the raging & controlled chaos happening within this experience HORLA has created at all times…no matter if it’s the atmospherically-inclined moments or the most amped-up sections of this song – “Into The Void” will keep you fully engaged & on the edge of your seat while you listen.  Just like a great single should, it immediately makes you want to hear more.

Every angle seems to be covered and they’ve already got an incredibly strong grip on the sound they’re looking to create – you can hear the connection between the band & the music, you can hear the passion in the way they play it & give it such extraordinary attention to detail from beginning to end.  Musicianship is there & precision tight all-around, the vocals definitely give them the edge they need to stand out, and perhaps more of an asset than anything else here, is the songwriting itself.  HORLA’s got a wicked variation of the Future-Music sound that includes Ambient & Alt-Rock, leading into material that’ll hold up strongly over time.  “Into The Void” is more than a remarkable start – it’s the sound of a band that should definitely be on your radar from this moment on and your playlists immediately.  Rad stuff happening in HORLA already in the earliest moments in this audible call-to-arms they’ve created on their brand-new single…I really think they’ve done everything possible to put their best foot forward on “Into The Void” and feel like I can safely say that each step they’ll take in the future will be huge leap forward from here.  HORLA sounds like the kind of band that will always have something incredible in the works…and as good as they already are, I can guarantee they’re just gonna get even better from here on.  Every reason to be excited about this band and riding on their bandwagon early…HORLA’s on rock-solid ground with their debut single “Into The Void” and on-track for a wildly successful career.

Find out more about HORLA at their official page at Facebook here:  https://www.facebook.com/horlaworld