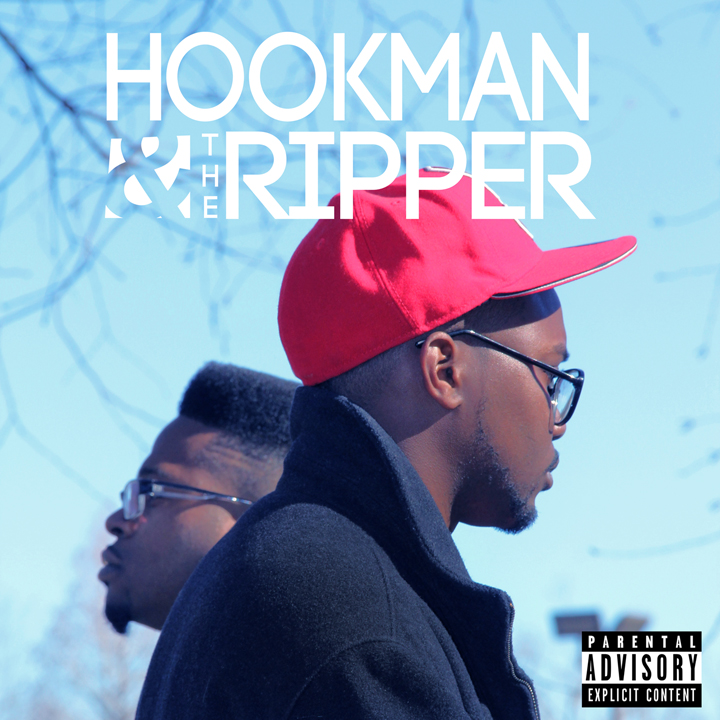 Keep in mind, an album preview process is much, much different than your typical A-to-Z album review where you hit play and let the songs play out. In a preview situation, such as the one here today with Hookman & The Ripper, we get a snapshot…a couple of tracks to let us know what’s all coming our way. And let me tell you – for myself, it couldn’t have come at a better time!

Talk about judging this book by its cover though! I’m not gonna lie – when I saw Hookman & The Ripper in pictures for the first time I was instantly through-the-roof excited.

For two guys in glasses you ask?

HELLZ YEAH! Cause to me…and again, this is all pre-preview-judgements here…to me that picture meant INTELLIGENT rap. Just cause I was RIGHT doesn’t make this snap judgement right – who knows…it MIGHT have been heavy-metal…

Ok…no…there was no chance of that whatsoever…

But in saying that it couldn’t have come at a better time was absolutely no joke. Because I’m way behind on ANY show that I watch, I literally JUST got around to finally seeing what good ol’ Arsenio Hall has been up to after all this time and sat down to watch an episode from his recent comeback. As it turns out, from the choices I had for viewing – the OBVIOUS choice was the interview with Prince himself…the symbol…”Christopher…” You all know who I’m talking about and yes, of course, he was absolutely amazing!

So you’d have to imagine my surprise when only 24 hours later I came across the most genuine-sounding, Prince-like track I’ve ever heard! And then it occurred to me what a true GIANT of music that guy really is – everyone listens but no one touches it. You know what I mean? Prince is PRINCE and no one else has ever come close. As far as my earholes and brains are concerned – I really can’t remember anyone ever even attempting his sound. And WHY NOT if we all love it so much?

And here we are. With a sample-track simply called “Tony,” Hookman & The Ripper slip into Prince-mode at full-force. It’s got the funk, the rhythm, the over-hyped synth sample and a delivery that could sell you a salesman. This is an absolute winner and if the rest of this album turns out anywhere close to this you can bet your ass I’ll be listening and grooving to every note. This is undeniable funk – any fan of the work Prince has done with the New Power Generation would jump on this track and ride it to the next live concert with Hookman & The Ripper.

The other track that was slid our way was called “Go Down” – a totally different feel from “Tony;” this has that dirty-low-ridin feel to it with unbelievable rap verses that show all the ingredients in a recipe for another flawless track. It might have an extremely different feel from the other track we’ve been turned on to, but both pack an undeniable set of hooks that have me looking forward to more, no doubt. And besides – as far as rap is concerned, any track that works in a “skeet-skeet” gets the official seal of approval from me!

They approach the mic with confidence and skill, they have diverse & well-produced backbeats to rhyme over. As it stands – there’s not much more we could ask for!

Aside from the rest of the album of course! Can’t wait!